I had a weak moment at the Patristics conference last week.  It cost me rather a lot of money.  But I succumbed to the lure of “50% off” and bought a copy of the Ashgate Research Companion to Hagiography, volume 1. 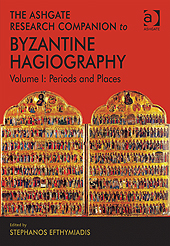 Hagiography is the most abundantly represented genre of Byzantine literature and it offers crucial insight to the development of religious thought and practice, social and literary life, and the history of the empire. It emerged in the fourth century with the pioneering Life of St Antony and continued to evolve until the end of the empire in the fifteenth century, and beyond. The appeal and dynamics of this genre radiated beyond the confines of Byzantium, and it was practised also in many Oriental and Slavic languages within the orbit of the broader Byzantine world.

This Companion is the work of an international team of specialists and represents the first comprehensive survey ever produced in this field. It will consist of two volumes and is addressed to both a broader public and the scholarly community of Byzantinists, Medievalists, historians of religion and theorists of the narrative. The present volume covers, first, the authors and texts of the four distinctive periods during which Greek Byzantine hagiography developed, and then the hagiography produced in Oriental and Slavic languages and in geographical milieux around the periphery of the empire, from Italy to Armenia. A second volume will deal with questions of genres and the social and other contexts of Byzantine hagiography

I’ve started in on this.  It begins with a very sensible introduction, in which the editor acknowledges the disgust that a normal historically-minded reader will tend to feel when confronted with hagiographical texts.  He also adds that often there are as many versions of a hagiographical text as there are manuscripts.

I have read as far as part way into the section on the Life of Anthony.  It’s not bad at all.

Here’s hoping that the rest is as good!

6 thoughts on “The Ashgate companion to hagiography”