UPDATED: I learn that it is not clear whether Bishop Bird is actually using church funds to do this.  I suspect that he is, since few people can afford such vanity cases personally, but I do not actually know this for a fact.

Anglican Samizdat blog is being sued.  The pretence is defamation, but the object is to drive it offline:

On February 19th 2008, the Diocese of Niagara served St. Hilda’s with legal papers with the intention of taking possession of St. Hilda’s building and freezing our bank account.

On February 19th 2013, exactly five years later, I was served personally with a statement of claim for defamation of character from the Diocese of Niagara’s Bishop Michael Bird.

The claim is seeking:

The claim quotes – with sporadic accuracy – 31 blog postings that are alleged to be libellous.

Contrary to what one might expect in such circumstances, I did not receive a cease and desist letter in advance of the suit.

Initial negotiations for an early settlement have been unsuccessful.

I have filed a statement of defence, the pleadings are now closed and we have commenced the Discovery process.

The first question, of course, is what does the good bishop have to hide?  What does he not want known?  That, for instance, as soon as he gained possession he sold the rectory?  Sadly, I fear that the answer is that he knows very well that his actions towards St Hildas were immoral; and that they bring him into disrepute; and he would rather not face the opprobrium.  Yet … what kind of reputation will he get from launching lawsuits designed to silence critics?

It would be interesting to ask whether the charitable purposes for which the church exists include vexatious lawsuits designed to shield their officials from public scrutiny, if the church should turn out to be funding this.

Readers may wonder what the bishop did with the church that he seized from those who paid for it.   The following photograph of St Hildas will tell you. 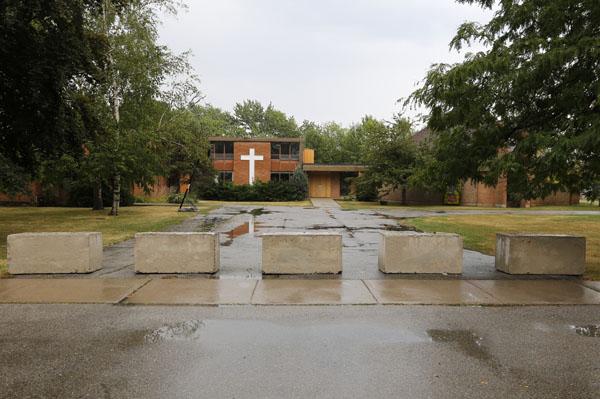 And, yes, those concrete blocks were the good bishop’s contribution.