A dinner engagement took me to St Albans this evening.  The road-widening on the M25 caused me to go early; and a look at my own Mithras site revealed that the Verulamium Museum there had some Mithraic items.  I took my mobile phone, paid for parking, then admission, and wandered in. 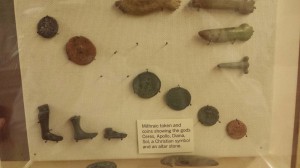 The museum didn’t place any obstacles in the way of photography, other than very low light levels, which troubled my eyes rather more than my digital camera.

What I was hoping to find was a vase, listed by Vermaseren as CIMRM 828, but with no photograph.    And, to my delight, there it was!  But … with a problem.

The vase was really just fragments.  But it had been restored, quite properly.  Unfortunately the portion that showed Mithras was impossible to see clearly! 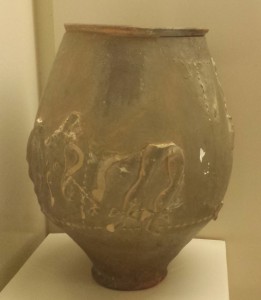 This shows Mercury (with the winged feet) and the bow of Hercules to the left.  Mithras is to the right and round the corner: 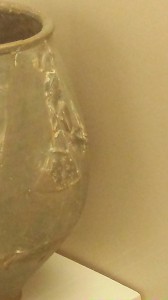 There were definite stars on his robe, just visible to the naked eye.

I’ve written to the director of archaeology, asking whether a photo might be obtained of the Mithras bit.  It will be interesting to see what the answer is.

But of course the same problem could occur in a hundred museums.  How do we get the items out of the cases and where we can photograph them?  Not that we want to handle these things … but unphotographed means unrecorded means unusable by scholars.

2 thoughts on “A visit to the Verulamium Museum”