The now-vanished Church of the Holy Apostles stood on a high place in Constantinople with views of the sea to north and south.  It stood in the western part of the city, standing on the main street which connected the Forum of Theodosius with the Charisian gate (Edirnekapi), and which corresponds to the modern Fevzi Pasha cadi.  It was built by Constantine and substantially rebuilt by Justinian, after which it took the form of a cross with a central dome and subsidiary domes, plus a number of buildings in the grounds.  It was in poor repair by 1453, and some of the mausolea were roofless by this time.  The church and its ancillary buildings were entirely destroyed by the Turks after they took the city, and the mosque of Mehmet Fatih – Mehmet the Conquerer – built on its site.[1]  It is described by Procopius in De aedificiis i.4.9-24,[2] and also in flowery terms by Byzantine writer Nicholas Mesarites, sometime between 1198-1203.[3]

Outside the archaeological museum in Istanbul stand four huge porphyry sarcophagi.[4]  These seem to have been found in the grounds of the Turkish Topkapi palace nearby, where they were brought, probably for use as building material, and then buried.[5]

That each early emperor was buried in a porphyry sarcophagus – larnax – is attested by the lists of tombs in the church given in the sources.  The first of these is contained in the Book of Ceremonies ii.42 by Constantine Porphyrogenitus.[6]  Mesarites describes the mausoleums – Heroons – in chapters 39-40.  Two other versions of the material appear in the Patria, texts about Constantinople of which I translated a portion last time, and in a manuscript printed by Du Cange.  There is also the Chronicon Altinate, which is included in the MGH but which for some reason I am entirely unable to find online at the MGH website.

Let’s have a look at the version in the Book of Ceremonies.

Heroon of the Holy and Great Constantine.

Heroon of the Great Justinian

The Stoa to the South of the Same Church

42. In this lie the sarcophagi of Arkadios, Theodosios, his son, and Eudoxia his mother. The tomb of Arkadios is to the south, that of Theodosios to the north, that of Eudoxia to the east, each of the two porphyry or Roman.

The Stoa to the North of the Same Church

The stoa means only a room containing pillars by this period, so may refer to any building within the church or standing outside of it.[7]

The shape of the Heroon of Constantine is said by Mesarites to be circular, with a dome.  Mesarites tells us that the mausoleum of Justinian had many “stoaed” (i.e. pillared) corners, so perhaps that was octagonal or hexagonal or something like that.

However the arrangement of the tombs within the Heroon, by 400 AD, schematically, was as follows: 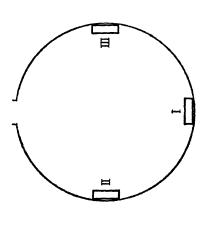 Entry to the building was from the west.  Mesarites tells us that, in the principal place, at the east end, was the tomb of Constantine the Great.  To the south was that of Constantius II, while the tomb of Theodosius the Great was to the north.[8]

XXXIX. But let us, if you please, go off to this church which lies toward the east, so that we may look at the things in it, in order to admire and describe them–this church whose founder our discourse has already declared to be Constantius.  2. This whole church is domical and circular, and because of the rather extensive area of the plan, I suppose, it is divided up on all sides by numerous stoaed angles, for it was built for the reception of his father’s body and of his own and of the bodies of those who should rule after them.

3. To the east, then, and in first place the body of Constantine,5 who first ruled the Christian Empire, is laid to rest within this purple-hued sarcophagus as though on some purple-blooming royal couch–he who was, after the twelve disciples, the thirteenth herald of the orthodox faith, and likewise the founder of this imperial city.  4. The sarcophagus has a four-sided shape, somewhat oblong but not with equal sides. The tradition is that Helen, his mother and his fellow-worker for the orthodox faith, is buried with her son.

6. The tomb toward the north and opposite this, and similar to those which have been mentioned, holds the body of Theodosius the Great like an inexhaustible treasure of noble deeds.   7. The one toward the east, closest to this one, is that of Pulcheria. She is the honored and celebrated founder of the monastery of the Hodegon; see how she, a virgin herself, holds in her hands the likeness of the all-holy Virgin.  …

Additional tombs, after Theodosius, were inserted later around the walls.

The Chronicon Altinate gives a list of emperors and their lengths of reigns.  It is of interest to us for what it says about the emperors in the mausoleum.  Starting on p.62 of MGH supplement 14:

Constantine, son of Constantius, born in Britain from the concubine Helena – the city in his name is in Thrace – … died on the 20th of May, a great and most Christian emperor.  His remains were placed in the church of the Holy Apostles in the sacrarium, which he himself also built, in a porphyry “pila”. …

Constantius … son of Constantine reigned for 24 years.  Constantine [sic] died on 3rd November and his body was placed in the church of the Holy Apostles in a porphyry “pila”.

Julian the apostate … His body was brought to Constantinople and placed in the western part in the church of the Holy Apostles in a porphyry “labrum”. …

On the 27th September Juvian [sic] died, most religious emperor, in Thichera a city of Galicia, and his body was brought to Constantinople, in the church of the Holy Apostles, in the porphyry “labrum” of the great Constantine.  After this his wife was placed in the same “labrum”.  He reigned 8 months.

[Valentinian]’s body was brought in the time of Theodosius the Great and placed in the church of the Holy Apostles where Constantine the Great [was] in a porphyry “lanarx”. …

On the 7th of January died the emperor Theodosius the Great at Milan.  His remains were brought to Constantinople and placed in the church of all the holy Apostles, in the sacrarium of Constantine the Great, in a porphyry “pila”; where also his wife Pracilla had previously been placed.

On the 1st May died the emperor Arcadius and his body was placed in the church of all the Holy Apostles in a porphyry “pilla” [sic] in the middle portico with his wife Eudokia, who before she died [acted] to the injury of St. John Chrysostom.  …

And so it continues.

There seem to have been several places in and around the church where imperial bodies may have been laid.  Space was no doubt a consideration also.

It is a pity that the site was destroyed.  I think most of us would like to see at least the sarcophagus of Constantine!  When I next go to Istanbul, I shall make sure that I do; if one of those porphyry tombs is his!