Readers of twitter will be aware that I went to Rome last Friday, coming back Monday afternoon.  I booked only a couple of weeks earlier, so I had to pay a large sum to the airline.  But the hotel was cheap, relatively.  Even so, the money seemed to vanish!

Going to Rome in August was a bit different.  The traffic is much reduced.  But the sun was truly brutal.  It was 32C in the shade every day – although on Sunday night there was rain and a thunderstorm – which made it impossible to do much outdoors.

Sites close, also.  I walked to the Trevi fountain on my first evening there, only to find it drained and empty.  I had hoped to go and see the Mithraeum of Santa Prisca, which is open at 4pm on the 4th Sunday of the month; but it was closed because it is August.

I stayed at the Hotel Nerva, which is behind the ruins of the temple of Mars Ultor, and right on the imperial forums.  I was shown to my garret – rooms in Rome always seem very small – but fortunately the aircon was on, if not as cool as I would have liked.  I asked for, and  got, a desktop fan as well, which helped quite a bit.

The staff ordered a number of items for me in advance, and also, at my request, asked for the ticket for Santa Prisca.  This is useful if you don’t speak Italian.  They ordered me a “Roma” pass which gave me free use of the underground (trains also airconditioned; stations not), as well as the train to Ostia.  Interestingly I found that you can buy this pass in the arrivals hall at Ciampino, while waiting for your luggage.  They also got me a ticket for the Vatican museums for 10:30 on Monday, although I could have bought this online and printed it off myself. 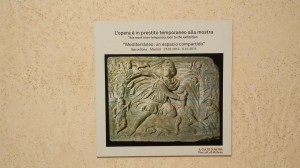 On Saturday I spent most of the morning at the Museo Nazionale in the Baths of Diocletian, opposite Termini railway station.  It was air-conditioned, it had toilets – although not toilet seats, curiously -, a vending machine for bottled water and sweeties, and … practically no visitors.  This made it ideal for photographing some of the exhibits.  It was also very interesting to find that some exhibits which had been absent last year had returned, and vice versa.  I took quite a collection of photos of the Mithras exhibits using the 10mp camera on my mobile phone.  I’ve not yet done more than copy the photos to my hard disk, however.

For lunch I ventured out to one of the tourist bar-restaurants nearby, and was duly scalped for poor quality food.  Avoid “steak” – I have twice been offered some mass of stringy fat with bits of meat interspersed in it. The bread was nice, but the waiter whisked it away before I could eat much of it! 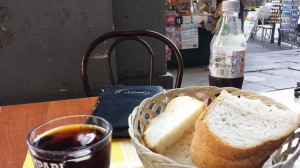 After that, I headed downtown.  For I had discovered that my 11 euro ticket for the museum would also admit me to the museum site at the Crypta Balbi, where I knew that there was a Mithraeum.  This too was largely empty, and I was able to get myself onto an Italian-speaking tour of the basement areas, including the Mithraeum – rather disappointing, the latter.  The staff were very helpful.  But I must say that the printed materials were profoundly confusing, and it took quite some effort to get oriented!  Upstairs there were Mithraic artefacts!

Then I walked up to the Pantheon, and then back to the hotel to snooze for a very necessary hour.  Then in the evening I went out, bought a panini at a food shop, and then I sat in the shade next to the Colosseum, and watched the people go to and fro, until the sun went down.

On Sunday I used my Roma pass and took the tube to Pyramide, transferring from there to the train for Ostia Antica (also free).  I have never seen a sign indicating which train is for Ostia Antica; but if you look inside, the tube-train-like panels above the doors indicate the stations to be visited.  The train was airconditioned, which was nice.  On arrival at the station, I walked to the ruins, and became aware how hot it was.  It seemed an interminable walk from the ticket office to the cafeteria, which – and I recommend doing this – I visited first.  It was empty, but I got some food, bought and drank more water, bought a 2 euro site plan in the bookshop, and then I looked to see where the Mithraea were.

Then I ventured out to see if I could find a particular site.  It was bestially hot, and I quickly became aware that it was no fun at all.  I was unable to locate the Mithraeum, and I realised that all I wanted to do was go back to Rome.   So I did, getting back around noon.  It was very good to get back to my nice cool room!

But the room had not been made up!  So I ventured out, and ended up wandering up the backstreets, eventually emerging at Termini.  There is a large Spar supermarket on the far side of the station, which is worth being aware of.  Then back, and, after lying around a lot, out back to the Colosseum.  It was rather threatening with rain.  I walked down to where the Septizonium used to be, but couldn’t see much sign of it.  Then back.  I bought an umbrella from a street vendor, and sat near the Colosseum.  Then it rained!  Up went my umbrella, while everyone else ran for cover, except for a woman sitting not that far from me who got progressively drenched.  For some reason she didn’t have, or buy, an umbrella.  I felt a little sorry for her; but not enough to forgo my own umbrella!  Eventually I spoke to her, and she turned out to be a sports journalist from Plymouth.

On the Monday I went to the Vatican museum.  The pre-booked ticket meant that I could go through the entrance immediately without queuing; but the desks inside to exchange it for a ticket were a disaster.  I emerged feeling very stressed.  I went first to the Pio Christiano gallery, and found the statue of Hippolytus there.  Fortunately this gallery was empty, and indeed was closed later.  The bad news was that the statue was just a cast.  Then to the cafeteria!  Then I went in search of the Mithras monuments, which were in the “room of the animals”, but impossible to see from more than a distance.  There were also some monuments in the Chiaramonti gallery.  But on the whole the experience was awful – a great, sweaty crush of people in corridors too small for them, and no way out.  I felt quite claustrophobic at one point, and eventually ducked under a rope and escaped!!

After that, I went back to the hotel, and got a car to the airport.  I arrived 2 hours before hand, and it took an hour to get through baggage checkin and security.  After sitting on a chair for half an hour, I went through and they were just boarding the priority passengers.  So I had no real time to wait.

I don’t think that I would go to Rome in August again.  It is just too hot to stand in the sun.  But it was very interesting to see, all the same.

UPDATE: The Mithras tauroctonies in the Chiaramonti gallery are these.  Unfortunately none of my photos came out well.

8 thoughts on “Going a-Rome-ing in August”