The more things change, the more they stay the same.  All public institutions in our time seem to be in decay, with ever fatter salaries for those nominally in charge, and ever less concern as to whether the job gets done at all.  This is sometimes eerily remniscent of the 18th century.  Yesterday I found myself thinking of a passage in the Memories of Dean Hole, the Victorian Dean of Rochester, where, looking back on the wretched state of things as they were at that period, and imagining a foreigner visiting, he writes[1]:

But most impressive, at first sight, to me was the sight, not only in cities and in towns, but in every village, of the church tower or spire, rising over the roofs and the trees, and hard by the pastor’s peaceful home. Surely, I thought, we have here, not only a prosperous, intellectual, energetic, brave, and accomplished people, but they are devout and religious also. Imagine then my disappointment when, as I drew near, I found the graveyards were uncared for, the tombstones broken, defaced, defiled, the church doors barred and locked, and when I obtained admission, for which I was manifestly expected to pay, I looked on desolation and decay, comfortable apartments for the rich, with cushions and carpets, bare benches for the poor; and was told that the church was only used once in the week, and that the chief shepherd resided a hundred miles from his sheep!

Yesterday I visited the ancient city of Norwich, and, taken by a whim, walked over to the cathedral close in the deliciously named Tombland district of the city.  Once inside the close, an oasis of peace after the busy traffic without, I walked across to the west door, the entrance to the cathedral.  But … it was closed.  Instead, signs directed me to a little doorway, in the dreadfully inappropriate modern extension, with gift shop, restaurant and other commercially-driven features.  Not that I have any objection to a cathedral restaurant; but visiting it was not the purpose of my visit. 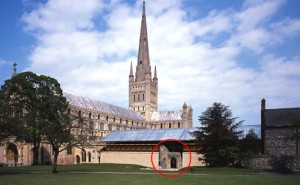 Rather gingerly I ventured into this entrance, and found myself looking at plate glass sliding doors, rather like an upmarket shop for women’s clothes.  The doors opened as I approached, and I stepped inside, and looked to see where the entrance to cathedral might be.  None was visible; but I was instantly buttonholed by an attendant who opened a leaflet she was proferring with a plan of the cathedral, and started heaping on me advice and help.  All of which was very unwelcome.

The need for all this was caused solely by the fact that the Dean and Chapter had closed the west door and diverted me to a side door in a different building.  It was, frankly, very intrusive to be forced to engage in conversation with this tourist guide.  I wasn’t there for commercial purposes; she, on the other hand, was there for no other purpose.

I declined the map, and obtained the information that entrance might be found to the left, behind some building work.  I walked, already feeling rather unsettled by all this, and found another doorway.  On the other side of this was an admissions desk, of the kind familiar from every tourist attraction, and prominently featured in very large letters was a statement along the lines of “Recommended Donation: £5”.  The whole view gave a very definite message to the visitor, and not by accident either.  If I went through that door, the message was, I had better be prepared for a fight, or to lose a substantial amount from my wallet.

Of course I could have hardened my heart and strode through.  But what manner of man comes to a cathedral in that frame of mind?  Other than perhaps Oliver Cromwell, whose attitude towards cathedrals at that moment struck me as more reasonable than it usually does.

What sort of church creates conditions in which sensitive visitors are guilt-tripped into handing over money, or else made to feel uncomfortable throughout their stay, or encouraged to make themselves insensitive?  We’re not children.  We know how modern fund-raising is done.  We all know that such people are sharks, whatever they say.   All this flummery was merely manipulation, deliberate, cold-blooded, by design, and for no other purpose than to shake down the visitor for money.  And the visitor was presumed to be comfortably middle-class; for what poor man would enter, faced with this?

I’m not ashamed to say that I turned around and walked back to the entrance that I had come in.  I didn’t want to be subjected to such psychological abuse.  I didn’t have to be here, after all.

Not that I could get out so easily; the “automatic” door only admitted people, and it required the assistance of the tourist person to find a button to let me out.  It was noticeable how much less friendly my reception was on trying to leave!

Outside I was accosted by a young man, dishevelled, his face bearing the marks of habitual insobriety, and with the urgency of one in need of his next fix.  On seeing my face he quickly abandoned his effort to get money, and I saw him approach several old ladies, and then he scampered out of the close.

I wandered back to the town centre, and there I found a group of old men preaching and handing out leaflets. 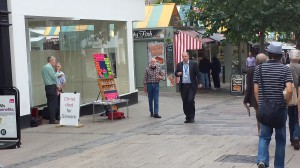 They weren’t slick.  Indeed their amateurishness was rather embarassing, and everyone gave them a wide berth.  But they kept on trying, and were still there a couple of hours later.

One of them was trying to give away leaflets, without much luck.  I took one, and found that for the price of a stamp I could get more booklets and a free bible (which would otherwise cost £10).

I was reasonably sure that none of these old men were members of the chapter of Norwich cathedral.

The contrast between the two ways of following God struck me forcibly.  On the one hand was a vast estate of prime real estate, filled with lovely ancient buildings, providing those who ran it with every comfort and nice incomes.   These saw their task as extracting money from the visitor, in order to improve their own situation and that of the estate.  They were, in some respects, no different to the beggar at their door, seeking money for his fix; except that he was in need and they, conspicuously, were not.

On the other hand were a group of men, asking nothing, unpaid, giving away what they had and willing to give more for the price of a stamp, and willing to be unpopular and mocked for doing so.

It was an uncomfortable reflection, and somewhere in it is the root of all anti-clericalism, and indeed all atheism.

It would be easy to be unfair on the Dean and Chapter, of course.  They owe their appointment to the state, which controls all church appointments by a Byzantine system of committees,[2] and appoints men principally for their loyalty to the establishment, their flexibility in principle, and their ability to shuffle the paper and utter pieties when needed.  But what it does not provide is funding to go along with it.  The appointees must make do with whatever historic funds their institution has; and this is rather slender.  Naturally men of this kind will try to make ends meet by whatever methods are available, as any of us might in the same position.  They are not sensitive to the claims of Christianity, and its responsibility to others, for otherwise they would not have been appointed.[3]  So … they do as such men have always done.  What else could they do?  They do, indeed, as the Jewish priests in Roman times did.  They act pragmatically.  But I do believe that a certain Jesus of Nazareth commented unfavourably on such behaviour.  On the other hand, since he could never have afforded the “recommended donation”, perhaps it doesn’t matter?

How great would be his surprise of joy could he return to us now!

Let us hope it will be so with us too.

Postscript: I commented on this on Twitter. This drew the following curious response:

@roger_pearse Sorry to hear that. There’s no expectation to give a donation it is voluntary. Pls send details to: marketing@cathedral.org.uk

I enjoyed the irony of this: the bland denial of the extraction process, followed by an email address starting with the word “marketing@…”.

No thank you, gentlemen; I am not part of your “marketing”.

4 thoughts on “Norwich cathedral – no entrance unless you pay $8?”