Let me introduce to a certain Damaskenos Monachos.  Apparently he lived in the second half of the 16th century, and may (or may not) be identical with the man of that name who was Bishop of Liti and Rendini in 1564; and Metropolitan of Naupaktos and Arta in 1570.  He composed a biography of St Nicholas of Myra, based on earlier accounts, which he included in his Thesaurus.  The oldest edition of his work was printed in Venice in 1570.  There is information about him in E. Legrand, Bibliographie hellenique II (1885), p.12 f.

All these details I obtain from G. Anrich’s Hagios Nikolaus, I (1913), p.459-60.  Anrich prints an extract from the 1896 edition of the text which mentions, charmingly, how St Nicholas of Myra punched Arius on the jaw at the First Council of Nicaea.  I’ve posted it below.

Unfortunately I can’t read this.  A Greek correspondent tells me that it seems very like Katharevousa, or like the Greek that might be read in a service on Mt Athos.  I had not heard of this, but apparently it was a compromise between ancient and modern Greek which was the official language of Greece until 1976.  An educated Greek should be able to handle it, he thinks.

If you can read it – all of it -, would you like to translate it into English for me?  I can pay something.  You can message me via my contact form.

Here is the text: 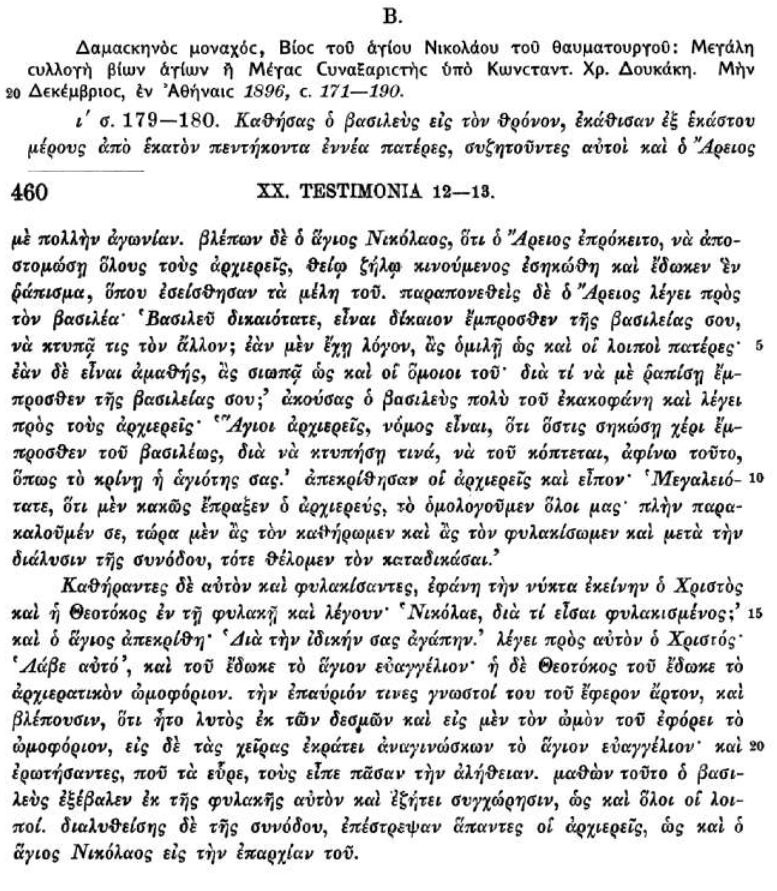 UPDATE: And here are a couple more lines, from the Handbook of painting icons, issued by Mount Athos:

A kind correspondent has sent in a rough translation of all this material, which is as follows:

Damascenos the Monk:  Life of saint Nicholas the wonder-worker:  Large collection of lives of saints, or “Great Book of Saints” by Const. Chr. Doukakis.   20th of December, in Athens, 1896, pages 171-190.

10.  p.179-180.  After the king seated himself on the throne, one hundred and fifty nine fathers seated themselves at either side of him, both they and Arius arguing with much unease.  Saint Nicholas, noticing that Arius was about to quash all the archpriests and moved by divine zeal, rose up and gave him a slap that shook all his members. Complaining, Arius says to the king: “O most just king, is it fair, before your royal highness, for one to strike another?  If he has something to say, let him speak as the other fathers do; if he is ignorant, let him remain silent as his like are. For what reason does he slap me in the presence of your highness?”  Hearing this, the king was greatly disappointed and said to the archpriests: “Holy archpriests, it is the law, that whosoever raises his hand before the king to strike someone, that it should be cut off. I leave this to you, so that your holiness(es) might be the judge.”  The archpriests replied, saying: “Your majesty, that the archpriest has acted wrongly all of us confess it; except that we beseech you, let us unstate him now and imprison him, and after the dissolution of the council, we shall then convict him.”

Having unstated and imprisoned him, that night Christ and the Holy Mother Theotokos appeared in prison and said: “Nicholas, why are you imprisoned?”  And the saint replied: “For loving You”. Christ then said to him: “Take this,” and gave him the holy gospel; the Holy Mother Theotokos gave him the archpriestly omophorion (scapular).  The next day some acquaintances of his brought him bread and they saw that he was freed of his fetters and on his shoulder he was wearing the omophorion, while reading the holy gospel he was holding in his hands. Having asked him where he found them, he told them the whole truth.  Having learnt of this, the king took him out of the prison and asked for forgiveness, as did all the others.  After the dissolution of the council, all the archpriests returned home, as did saint Nicholas, to his province.

And from the painting manual (I don’t know the English name of this work: in German it is the Malbuch), the items seem to be legends to place on the icons.  The first reads as follows:

“The holy and ecumenical 1st Synod in Nicaea….
And Arius, standing, also in hieratic vestment, and standing before him, Saint Nicholas with arm outstretched to slap him.”

The second one says:

“The saint in prison, receiving the gospel from Christ and the omophorion from the Holy Mother. – Prison, and at the centre is the saint and Christ at his right holding a gospel; at his left the Theotokos holding an omphorion: they are giving these to him.”

Again, many thanks!  Comments are welcome!

13 thoughts on “Is this Katharevousa and can anyone translate it? A passage from Damaskenos Monachos on St Nicholas punching Arius”