It’s been a little while since I posted a picture of the Meta Sudans.  This was the conical fountain at the end of the Appian Way, just outside the Colosseum.

At Wikimedia Commons today I found an old photograph, from the Bundesarchiv Bild library (no 102-12292) of Mussolini, from a podium outside the Colosseum.  The Meta Sudans stands nearby, soon to be demolished at his orders.  Here is the picture on Wikimedia Commons, which has a date of September 1931:

But here is what seems to be the same picture at the Bundesarchiv site (complete with annoying and pointless “watermark”), with the date April 1926.  This states, contra to Wikimedia, that it was taken after Mussolini returned from Tripoli, and says nothing about “youth” at all.

I do wish that I could find a source that explained why Mussolini had the ancient fountain demolished.  For a movement that drew inspiration from Ancient Rome, doing so was a curious thing.  Probably some Italian source will hold the answer, but these are not nearly visible enough online.

Here’s another photograph of the Meta Sudans, this time by Richard Brenan, Dungarvan, Waterford on a holiday in Italy c.1910.  A copy is present on the Waterford County Museum site, although with a watermark.  (I must say that the greed of repositories for fees, when they are paid to make material available by the public, is rather shameful).

There are also some images available on coins, which are interesting.  Here is a sestertius of Titus, showing the Meta Sudans to the left of the Colosseum:

The same coin is depicted here:

There is also a medallion of Gordian III, ca. 240, via here, which depicts the Meta Sudans in antiquity:

And a photo of the item itself via here.

And a too-dark photograph of the medallion from the British Museum website (and kudos to them for putting it online):

The sestertius of Titus is common, and copies can be had on the market easily enough.  This means that we have some good photos, made freely accessible online.  On the other hand the medallion of Gordian is rare.  This means that our only access is rather rubbish.  Museums that hold copies don’t make good quality photos available.  One has to ask: isn’t this the reverse of what should happen?  If public owned museums hold things, they should be more accessible, not less?

Now something else.  Here is an excerpt of the Bufalini map of Rome (1551) indicating the position of the Meta Sudans: 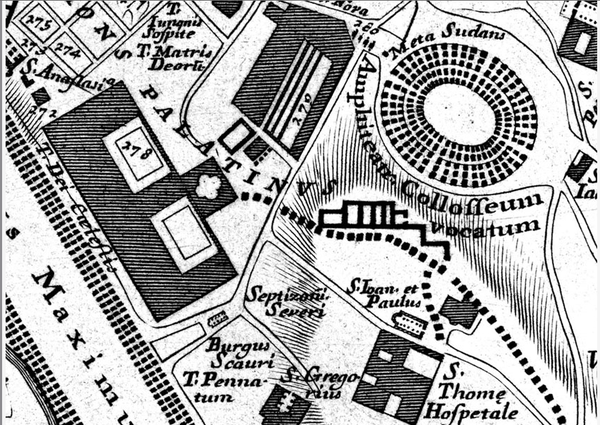 Here’s another old photograph of the Meta Sudans, from the other side, with the Palatine in the background and the Arch of Constantine to the left: 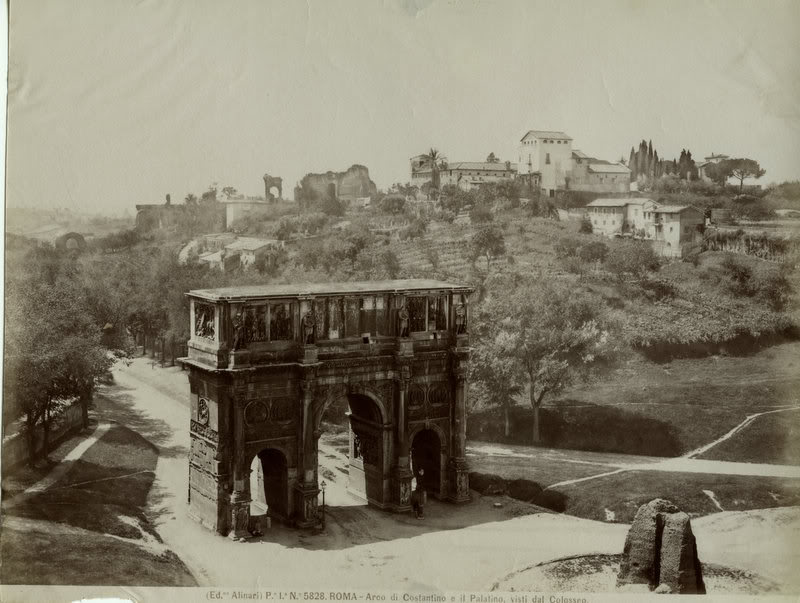 The next one, from here (which also has a bunch of other photos of the Meta Sudans), is looking towards the arch of Titus, and taken around 1880:

And another from the same site:

And a third one, also from the same site.  Note how the Meta Sudans lines up with the road to the forum?

Let’s end with a 16th century drawing by Du Perac, showing much the same view looking towards the forum.

It is remarkable that the monument looks basically the same as it does in the 19th century pictures.  Du Perac has depicted it as taller and thinner than it was – it can hardly have got fatter since his time! – but it looks as if it was no taller in his day.  The main damage to it, no doubt, occurred in the Dark Ages.

I do wonder if a complete set of documents exists in Italian archives somewhere.  Is it conceivable that the demolition was not documented?  Not really.

7 thoughts on “Mussolini and the Meta Sudans”