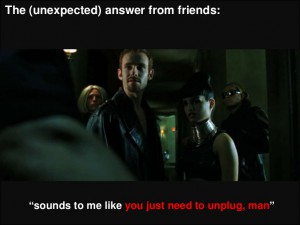 I’m back after a very pleasant week of holiday, and I’m starting to pick up the threads once more.  I’m still feeling somewhat frivolous.

While I was away, Ralph Cleminson sent over a fresh version of Methodius’ De Lepra (a text which gives an allegorical interpretation of Leviticus 13) in which we discussed various issues.  Part of the problem is that it opens in what is clearly the middle of a passage, and the two lines in question are inscrutable.  It is also in the form of a dialogue, but then one of the “speakers” starts quoting two other people.  So it is nearly impossible to label the speakers, as one might otherwise do.  I’ve had a go at producing a semi-final version, and we’ll see how it looks.

In addition, Andrew Eastbourne has accepted a commission to translate the fragments of the Greek version of De Lepra, preserved in a medieval florilegium, and printed in the GCS 27 edition.  These are fairly extensive, but Dr Cleminson has already indicated that they differ quite considerably from the Old Slavonic text.  We’ll include both.  Not sure how to format that – I do hate the idea of parallel columns.

In the meantime I have commissioned Dr C. to translate the next work by Methodius, “On the Leech”, which I imagine is another piece of biblical interpretation.  Thankfully there is no Greek in this.

Meanwhile I have made an important discovery or two.

The first discovery is what is the difference between “Old Slavonic” and “Old Slavic”.  Around the web, the latter is very common; but the former is the one that I know from literature.  It turns out that they mean the same thing – the very early literature of the Slavs in Bulgaria just after the creation of their alphabet – but that Old Slavonic is the form used in Britain, while “Old Slavic” is the form used in the USA.

At least I now know, when I refer to Old Slavonic, what I am talking about.  Sort of.

Well, I do have a French volume, produced by the Cerf, which has an introduction to that literature.  But somehow I forgot to look for it last week.  I’d read it this week, except that it is at home, and I am back in the hotel.  One day I will remember to read it.

My second discovery is that the English word for slave is indeed connected to “Slav”, via Greek.   I read it on a web page, so it must be true.  But it sounded plausible over lunch.

What they said is that the Greek word for slave was doulos.  But the medieval Greeks captured so many Slavs during the wars against the Bulgarians, that they based a Greek word specially on that.  This of course became known in Sicily, then under Byzantine rule; and, after its conquest by the Normans, around the same time as the Normans conquered England, the term became part of old English.

It sounds plausible.  I haven’t checked.  Believe at your own risk!

Meanwhile this week, the Oxford Patristics Conference 2015 has started – started on Monday, actually.  I’m not attending.  This is because it looked dashed expensive when I looked at it, last November or whenever.  I have to pay for it myself, after all – no grants for me.  I also lose the money I’d earn by working. Also I’m a bit bored with conferences, in truth.  I’m probably just a bit jaded.  And I am not a patristics professional, so I don’t need to be there for career reasons.

Anyway, I hope they all have a super time.  There are some interesting events, notably the launch of the new edition of Cyril of Alexandria against Julian the Apostate.  And of course there are lots of interesting people there.

One thought on “From my diary: Gentlemen say “Old Slavonic”, Yankee; the latest on Methodius; plus the Oxford Patristics Conference 2015. All in your soaraway blog!”