Last night I was reading Boswell’s Life of Johnson, and came across the familiar quotation in a Latin form, Quos Deus vult perdere prius dementat – “those whom God wishes to destroy he first drives mad”.  Therein it was stated that the Latin quotation was on everyone’s lips, but its source was known to nobody.

A Google Books search on the English version gives no hits before the mid-19th century.  Before then, the tag was circulated in Latin, it seems, with various word-orders and slight variants.

I think we can suppose that the English “gods” replacing “Deus”, “God”, is just a feature of quotation.  These tags are not transmitted as gospel, and a speaker or writer will modify them as he thinks gives the best effect.

But where does the Latin text come from?  Is it ancient?  In fact it is not.  It originates, as best I can tell, in the 17th century.

A Google Books search found me an article in the Monthly Magazine or British Register, vol. 51 (1821), p.520, in which a correspondent writes as follows:

To the Editor of the Monthly Magazine

IN the following extract from Mr Boswell’s Life of Dr Johnson vol iv pp 196 and 7 your correspondent Poplicola in your Magazine for May will find his enquiry answered respecting the Latin line he quotes — “Quos Deus vult perdere prius dementat.”

With the following elucidation of the other saying:– “Quos Deus (it should rather be Quem Jupiter) vult perdere prius dementat,” Mr Boswell was furnished by Mr Richard Howe of Aspley in Bedfordshire, as communicated to that gentleman by his friend Mr John Pitts, late rector of Great Brickhill in Buckinghamshire.

Perhaps no scrap of Latin whatever has been more quoted than this. It occasionally falls even from those who are scrupulous even to pedantry in their latinity and will not admit a word into their compositions which has not the sanction of the first age. The word demento is of no authority either as a verb active or neuter. After a long search for the purpose of deciding a bet, some gentlemen of Cambridge found it amongst the fragments of Euripides, in what edition I do not recollect, where it is given as a translation of a Greek Iambick.

The above scrap was found in the hand writing of a suicide of fashion.  Sir D.O. some years ago lying on the table of the room where he had destroyed himself.  The suicide was man of classical acquirements: he left no other paper behind him.

This is interesting for several reasons.  Firstly, it gives a variant form, “Quem Jupiter”.  Secondly it refers to an early unspecified edition of Euripedes.

Which edition this is is revealed by another hit in the search, P. R. Reynolds, The Writing and Selling of Fiction, 139-140:

Joshua Barnes (or Barnesius, according to the custom of the time) edited the works of Euripides in 1694, Euripides quae extant omnia.  This including a collection of fragments of various tragedies, which appears in the work under the title Incertae Tragoediae.  The volume also includes three indexes, on unnumbered pages.  The first index is important to this story.

In this “index prior”, under the letter “D”, (Google books link), we find the following: 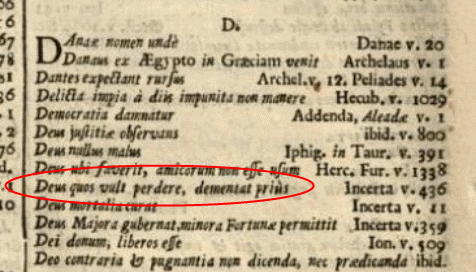 I.e. Deus quos vult perdere, dementat prius, as found in the “Incerta”, on verse or line 436.  For of course this is drama, and each line is numbered.

Now this is certainly our quotation from Johnson.  But what precisely is the entry in the body of the text?  Again, we are fortunate that the volume is online, for we can locate v.436 here, and it is thus: 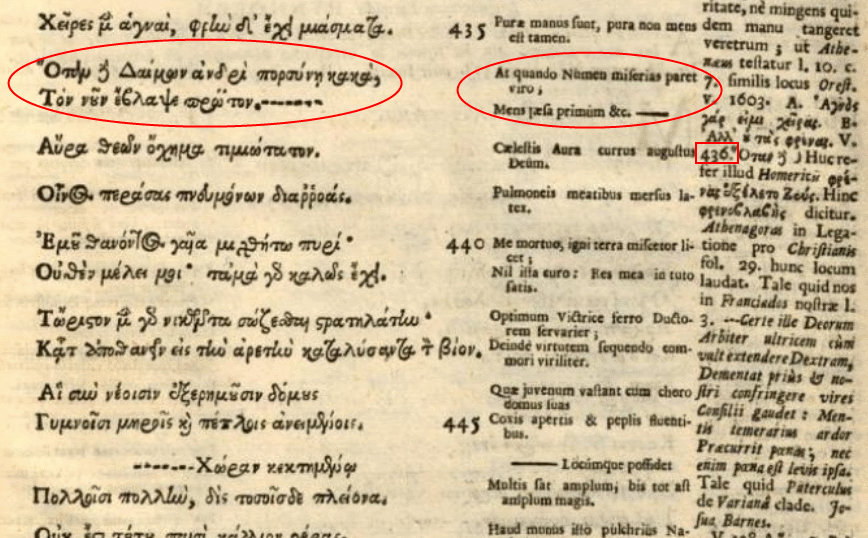 The Greek of the fragments appears in the left column, and is more or less as follows:

But when the daimon plots against a man,
He first inflicts some hurt upon his mind.

The word daimon does not here mean “demon”, but rather has the twin meanings of “divinity” and “fortune”.  In his translation, Barnes uses “Numen”, rather than “Deus”, with this in mind.  In fact our saying is not Barnes’ translation, but instead a summary of the content!

So the Latin is in fact a coinage by Dr Joshua Barnes, in 1694, summarising a saying that he believed was a fragment of Euripides.

The fragment is found in the second century AD Christian writer Athenagoras of Athens, in his Supplicatio pro Christianis (Plea for the Christians), chapter 26, as Barnes himself indicates in his marginal notes on the passage above.

But I learn from this site that in fact it is a note on Sophocles Antigone, l.620, by a scholiast.  The idea itself is present in Homer, Odyssey, IX, 492-3.

In the tragedy Antigone, of Sophocles, in verses 620-623,  it said something similar:

For cunningly of old was the celebrated saying revealed: evil sometimes seems good
to a man whose mind a god leads to destruction.

The ancient scholiast on these verses says:

When a god plans harm against a man, he first damages the mind of the man he is plotting against.

August Nauck collected this couplet as one of the fragments of his Fragmenta Tragicorum Graecorum (Leipzig.Teubner 1889), namely exactly the number 455 of Adespota or anonymous and therefore without author:

The couplet is in the scholia to Sophocles, Antigone, l. 620 …

The scholion is then quoted by Athenagoras.  Why the early editors attributed the saying to Euripedes I do not know.

Barnes also mentions the sayings of Publilius Syrus, in the 1st century BC, and the same site tells us that the Sententiae 612 reads:

Fortune makes stupid him who she wishes to destroy.

But there is more.  For what about this variant “Quos Jupiter”?  It turns out that Barnes himself was working from an older writer, James Duport.

In 1660 Duport published his collection of sayings from Homer, Homeri poetarum omnium seculorum facile principis gnomologia, better known as the Gnomologia Homerica.  On p.262 (Google Books) we find the following comment, note a, on the section of the Odyssey: 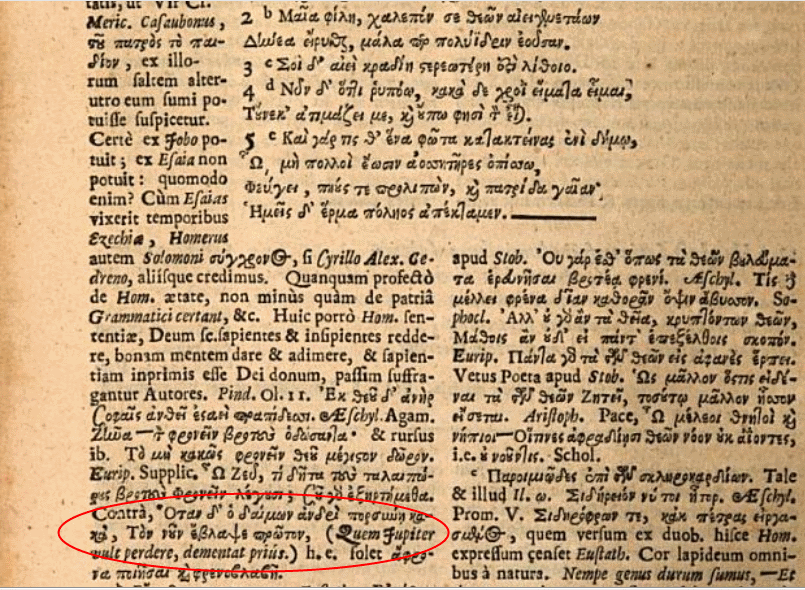 After reviewing a couple of instances of the thought, Duport quotes a portion of Euripedes, and then, expressing the opposite thought (Contra) he quotes the same line and translates Quem Jupiter vult perdere, dementat prius.  This gives us our variant.

It would be interesting to see what might be found in earlier editions of Euripedes, or any Latin translations of that era.  Most Greek works appeared first in a Latin translation, after all.  Unfortunately at this time I do not have much knowledge of the transmission history of Euripedes, so that must wait for another time.

To summarise, the saying as we have it is a 19th century translation of an index entry, written by Joshua Barnes in 1694 in his edition of Euripedes.  The entry summarised rather than translated the content of a couple of lines of Greek.  The lines were originally by a scholiast on Sophocles, quoted in the 2nd century AD by Athenagoras, and supposed to be by Euripedes by early editors of that author.   Barnes in turn was almost quoting James Duport in his 1660 work on the ideas to be found in Homer.

We may suppose that “Deus” and “Jupiter” were altered by some unknown speaker into “gods” in 19th century English, from an entirely correct feeling that the saying was not consistent with the character of God, but rather more with the outlook of the pagan gods of ancient Greece who, to quote a more modern source, “were petty and cruel, and plagued mankind with suffering.”

UPDATE.  I had meant to mention also the French editor Boissonade, who later gave a commentary on Euripedes in his Poetarum graecorum sylloge tom. XIX.  Euripides tom. 4.  In the 1826 reprint, again in the index, on p.322, we find:

And on p.300,  which is scholia on the Bacchae, line 840, we get the Greek and then “sic quos vult perdere Jupiter dementat.”

UPDATE: An email from Andrew Eastbourne draws my attention to an article, F.W.Householder, “Quem deus vult perdere dementat prius”, The Classical Weekly 29 (1936), 165-7 (JSTOR).  This suggests that the Latin tag does not originate with Duport, but that he was referencing some existing form of the saying.

20 thoughts on “Is “those whom the gods wish to destroy they first make mad” a classical quotation?”