On a wall in the Forum of Peace in Rome, Septimus Severus erected a huge map of the city, at a scale of about 1:240, on 150 marble slabs, between 203-211 AD.  It was 18 x 13m in size, approximately, and held on with iron pins.  This map is today known as the Forma Urbis Romae.  The wall is still there, at full height, because it was incorporated into the complex of buildings which make up the Church of SS. Cosmas and Damian.  So we can see the marks of the pins there.   However the marble was broken up and taken away during the middle ages.  Only fragments remain today, covering about 10% of the whole.  The first batch were discovered in 1562, and some 1200 are known, mostly held in the Capitoline museum.

Dorothy Lobel King tweets that a new piece has been discovered at excavations at the Palazzo Maffei, far away from its original location.  The press release is here or here (PDF) via here.  It tells us that the fragment was found during excavations:

…in recent years in the interior of the Palazzo Maffei Marescotti, a building with extraterritoriality owned by the Vatican in the Via della Pigna.  The “Vatican” piece now allows a more comprehensive reading of the ancient topography of today’s Ghetto and Teatro Marcellino.

The new fragment relates to plate 31 of the map, which is the present-day area of the Ghetto, one of the monumental areas of the ancient city, dominated by the Circus Flaminius, built in 220 BC to host the Plebeian games, and where a number of important public monuments stood.  Among these still visible today are the portico of Octavia and the Theatre of Marcellus.  As well as a section of the theatre, the new Vatican fragment bears an inscription that completes the word “Circus Flaminius”, connecting to a large piece discovered in 1562.

(I have a map of ancient Rome here; the Circus Flaminius is near the Tiber island, up from the theatre of Marcellus).

Thankfully they also give pictures.  Click on the picture below for fill size.  The new piece is the one to the right.

And this zoomed in version: 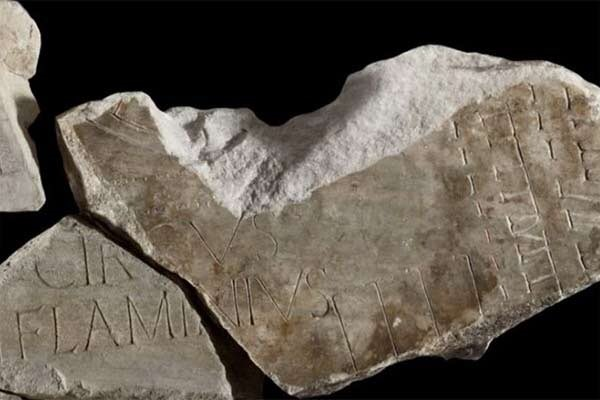 The new piece is being exhibited for the next month at the Museo dell’Ara Pacis.

See also (via Sarah Bond) the Stanford site which holds the other pieces here, with a schematic of the whole map: 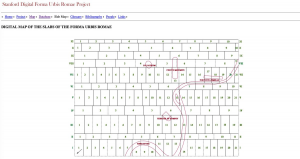 3 thoughts on “A new fragment of the “Forma Urbis Romae” discovered!”