David Wilmshurst writes to tell me that a really important book has finally come out – the first English translation of Bar Hebraeus, Chronicon Ecclesiasticum, is now available from Gorgias Press as The Ecclesiastical Chronicle, ISBN 978-1-4632-0535-5.  It’s a mighty 590 pages long, but sadly it costs $140 although various discounts are readily available. 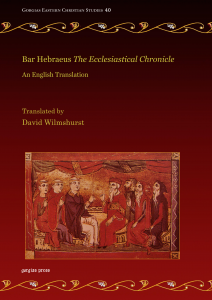 The work consists of a history of the Syriac world, given as a series of short biographies of people and their works, down to his own time, the 13th century, when the Mongol invasions means that the Syriac world ceased to exist as a literary culture.  What Bar Hebraeus tells us about many of those figures is all that we know, in many cases.  Consequently any work on Syriac of any sort will tend to quote or reference it.

Yet it has never existed in English.  In fact I see that on the About page for this blog, a translation of it is mentioned as something that I would like to see.  So well done David for doing it!

Anybody with any interest in Syriac studies will want a copy.  There is a 40 page introduction, and then the work itself in two sections, as Bar Hebraeus gave it – first all the west Syriac writers, including himself (!); and then the east Syriac writers of the Church of the East.

Well done, Dr. W.  It is a mighty service to have this important work accessible.  I hope that Gorgias make a nice amount on money on it.