Roman society was a brutal place.  At the bottom of the heap were slaves, who could endure a very unpleasant time.  Not unnaturally, some of them ran away; and some were recaptured.

In the museum in Rome in the Baths of Diocletian, there is a slave collar on display. Here are some images of it (click on the images to enlarge them).[1] 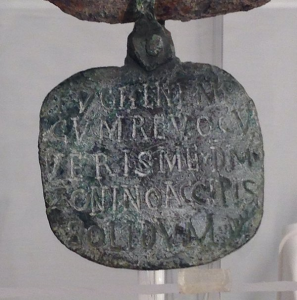 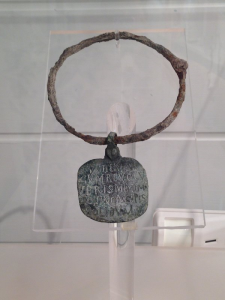 The inscription is straightforward.  Slightly normalised it reads:

I have run away. Catch me. If you return me to my master Zoninus, you will receive a solidus.

A solidus is the standard gold coin of the later Roman empire, so not a small sum.  Clearly this was a valuable slave, and one who didn’t like his or her “employment” much.

For comparison, here is the receipt for another slave.  The tablet was found in London.  The image was reversed and coloured from a photograph.[2] 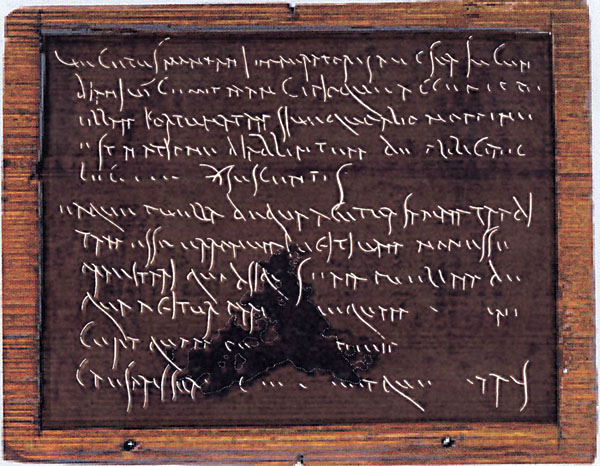 Vegetus, assistant slave of Montanus the slave of the August Emperor and sometime assistant slave of Secundus, has bought and received by mancipium the girl Fortunata, or by whatever name she is known, by nationality a Diablintian, from […] for six hundred denarii. And that the girl in question is transferred in good health, that she is warranted not to be liable to wander or run away, but that if anyone lays claim to the girl in question or to any share in her, […] in the wax tablet which he has written and sworn by the genius of the Emperor Caesar […]

The girl is a Gaul.  Montanus is an imperial slave – really a civil servant.  Vegetus is also a slave, but clearly able to buy things with his own money, and for a not inconsiderable sum.

There are more items about slaves here.  One of these is witness to an apparently more tender relationship:

The master to his slave-girl.

It was found on the girl’s arm.  For she died while hiding from the eruption of 79 AD at Pompeii, and her remains were found at modern Moregine, near Pompeii.  The item is now in the National Archaeological Museum, Naples.

But why does it not give her name?

5 thoughts on ““I have run away. Seize me!” – a slave collar of the time of Constantine, and other similar items”