Regular readers will be aware that I am interested in the Meta Sudans, a Roman fountain that stood in Rome outside the Colosseum, and behind the Arch of Constantine, until it was demolished by Mussolini in the 1930s.  By that time it was merely a stump, but earlier representations show that it was originally much taller.

Today I came across a paper by Dafina Gerasimovska, which collected representations of the Colosseum, as a way to learn more about Roman architecture.[1]:

When talking about architectural buildings from Antiquity we rely on archaeological finds and written sources. Even coins can provide information about the look of ancient Roman architecture. …

An additional rich source of clues to the original appearance of buildings and their condition at certain times, however, can be found in paintings, drawings, engravings, etchings, prints, watercolours, old reconstructions and other artistic works of different periods in the past. Many painters, engravers, architects, travellers and diplomats interested in architectural remains have left works that serve as alternative sources for the study of cultural history and the architectural monuments which form a part of that history.

This article is not intended to highlight the artistic value of the achievements of famous artists inspired by Roman buildings but to emphasize the significance of these works as historical documents—as evidence of their existence, of changes in their appearance over time, of their ruin or of their recovery.

Inevitably this paper contained images of the Meta Sudans.  Here are some of them.  I apologise for the rather awkward way that WordPress displays these – click on the image to get the full size original.

The oldest one is by Dutch artist Gaspar van Wittel (1653–1736) who went to Rome in 1675.  From his views of the Colosseum, I have excerpted the following:

Note the slender, tall appearance of the fountain, which I have marked with a red box.  The next one is by Giovanni Paolo Panini (c.1691–c.1765), from his 1758 Gallery Displaying Views of Ancient Rome.

The interesting part of this one, is that it shows a band around the Meta Sudans, about halfway up.  This sort of thing appears in the ancient coins that depict the Meta Sudans. 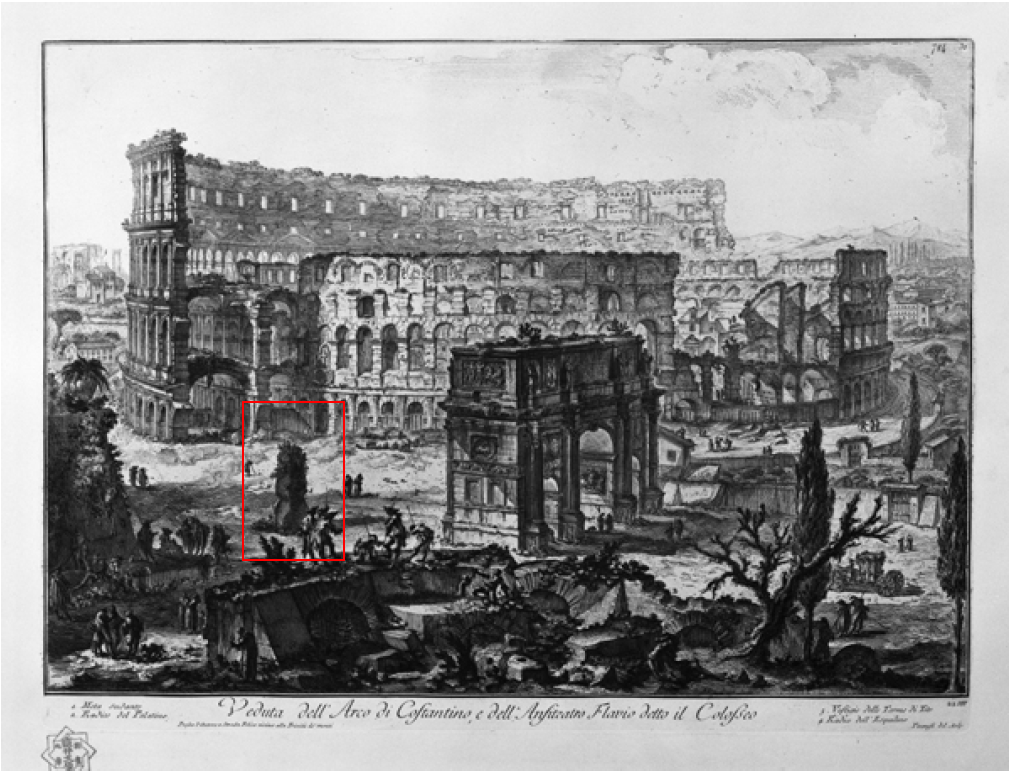 Again this shows a tall Meta Sudans, although not clearly.

All of these are very interesting evidence on the shape of a now vanished Roman monument.