Readers may remember that a few years ago I published a translation of Eusebius of Caesarea’s Gospel Problems and Solutions (Quaestiones ad Stephanum et Marinum).  Today I learn from a correspondent that the main manuscript, Vaticanus Palatinus Graecus 220, has been digitised and is now online at the Vatican website!  Folios 61-91 contain the work, which is itself an abbreviation of the original in 3 books, which discussed differences between the start and end of each gospel, and attempted to resolve them.

It is interesting to see that there are scholia on some leaves.  I include an image of one below.  Does anyone know what it says?

Here’s the opening of the work (f.61) (click on the images for a clearer image): 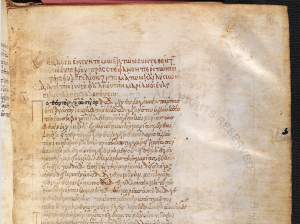 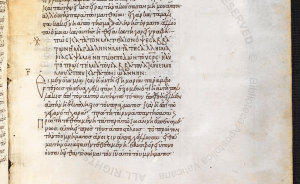 Here is where it breaks of, without any colophon (f.96): 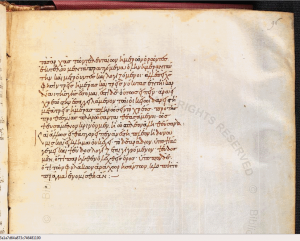 And here on folio 90v is a scholion: 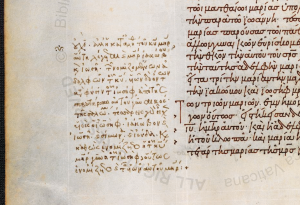 I’ve zoomed in somewhat, and it would be interesting to know what it says.

Seeing this crystal-clear manuscript makes me wish we had had it available, back when David Miller was working on the translation.   As it is, we may be so grateful that this is now freely available online!

UPDATE: A correspondent in the comments has kindly translated the gloss for us – thank you!  It reads: