A kind correspondent has pointed me to a site on mashable containing photochromes from 1890.  It’s here.

But what is a photochrome?  The site says:

These postcards of the ancient landmarks of Rome were produced around 1890 using the Photochrom process, which add precise gradations of artificial color to black and white photos.

Invented in the 1880s by an employee of Swiss printing company Orell Gessner Füssli, the Photochrom process was complex and closely guarded. It involved the creation of a lithographic stone from the photo negative, followed by the successive creation of additional litho stones for each tint to be used in the final image.

Up to 15 different tinted stones could be involved in the production of a single picture, but the result was remarkably lifelike color at a time when true color photography was still in its infancy.

Here are two which feature the Meta Sudans, the now vanished Roman fountain which provided air conditioning just outside the Colosseum (which originally stood in a hollow in the hills, before Mussolini built the Via del foro imperiali.

Click on the pictures for full size – and enjoy! 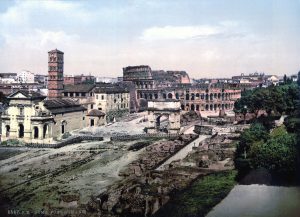 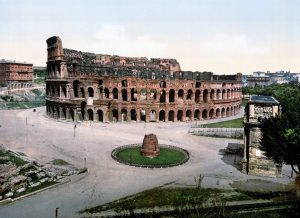 3 thoughts on “Two photochromes of the Meta Sudans in Rome, from 1890”