I was delighted to discover that the British Museum has initiated a project to catalogue its holdings from Antinoupolis in Egypt.  It seems that in 1913-14, John de Monins Johnson excavated at the site; but did not publish his work.  All that appeared in print was literary and documentary texts on papyrus!  The link above takes you to a bunch of objects that the BM holds; and they intend to sort the matter out and publish his papers, etc.

Truly this is a solid and worthwhile enterprise – but then I expect no less from the British Museum, an organisation that has consistently understood what the internet age means for museums and outperformed expectations.

One item on their site caught my eye:

EA1648. Limestone(?) monumental inscription broken away at the right-hand side and bearing seven lines of Greek. The text honours Flavius Maecius Severus Dionysodorus, Platonic philosopher, in a dedication by the Senate of Antinoopolis. 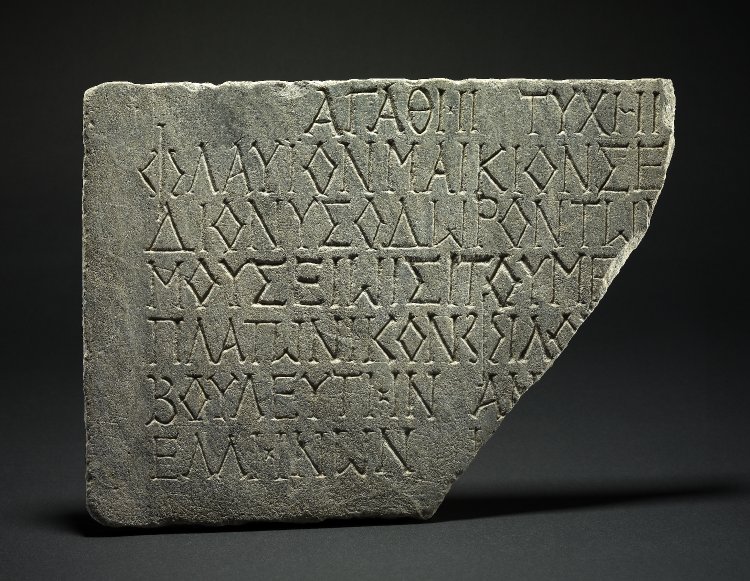 The British Museum link gives a transcribed text, and a translation:

For Good Fortune.
Flavius Maecius Sev[erus]
Dionysodorus, one of those
maintained by the Museum, exempt from taxes,
Platonic philosopher and
bouleutes (is honoured by)
the Boulê of the new Hellenes of Antinoupolis.

The city was founded in 130 AD.  The item was purchased on site, not excavated.  If it relates to the Platonic philosopher Severus – quoted by Eusebius, Porphyry and Proclus – then it must be late 2nd century.  This I learn again from the exemplary British Museum page.