An earlier visitor to Antinoupolis was the Jesuit Father Sicard, whose work I have yet to locate.  But Richard Pococke gives (p.279) an item on his authority as follows: 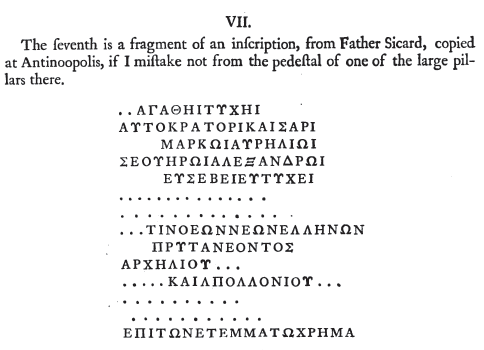 We’ve seen a reference in Vansleb to a “pillar of Marcus Aurelius”.  This must be the inscription.

I don’t profess any skill with Greek inscriptions whatsoever, but even I can see autokratori kaisari marco aurelioi seoueroi alexandroi eusebei eutuxei” in the above; i.e. Emperor Caesar Marcus Aurelius Severus Alexander.  So in fact the inscription is not for Marcus Aurelius, but for the later emperor Alexander Severus.

Can anyone read more?

8 thoughts on “An inscription from Antinoupolis preserved by Richard Pococke”