Today I found myself looking at the splendid map of Antinoupolis in the Description de l’Egypte, made by Napoleon’s engineers.  When it was made, in the 1790’s, the Roman city still stood on the high ground – above the level of the Nile flood – to the east of a wretched village named Sheikh Abade.

On a whim I went to Google Maps.  The site is between Minya and Mellawi in middle Egypt.  I rotated the aerial photo as best I could (with ctrl-click+drag), to line it up with Jomard’s plan.  Then I screen grabbed them both.

Looking at Jomard requires the high-resolution scan available at Heidelberg, and you can zoom and zoom.  So this is just a low-res overview: 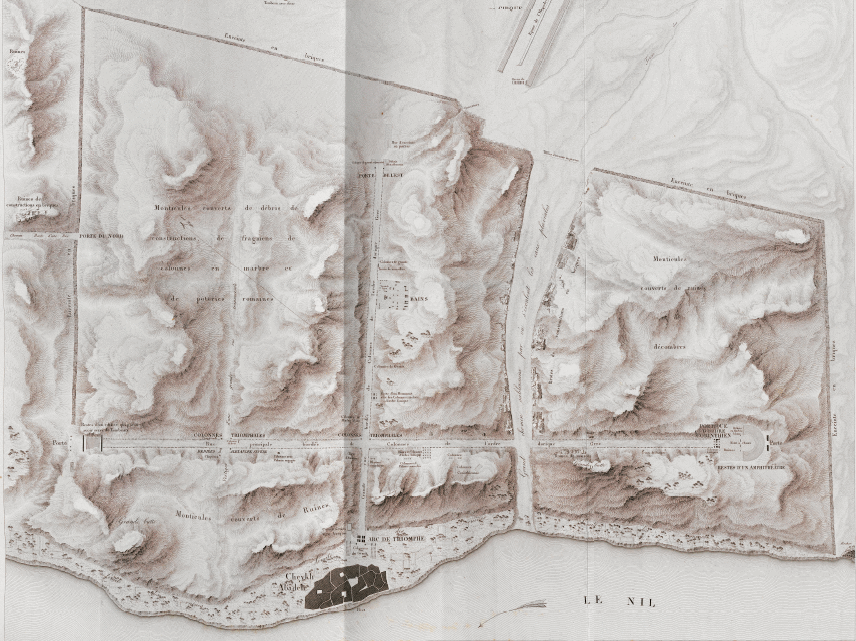 And here is a screen grab of the site today – for the inhabitants are busily bulldozing the monuments, so it may not be so tomorrow.  Link is here, so you can zoom for yourself!

The surveyors did make some mistakes.  The massive brick wall that surrounded the late antique city is not a rectangle, but tapers toward the top.

But it is amazing to see that the main two streets can clearly be seen, even at this resolution.

In fact I started to mark up a few sites:

In the southern section of the city, to the right, the grid of the streets seems almost visible to me, running north of the street “with Doric columns” marked by Jomard.  The “amphitheatre” must be a theatre, I suppose.

I was looking for the site of the magnificent west gate, labelled a triumphal arch.  On the plan it is thus: 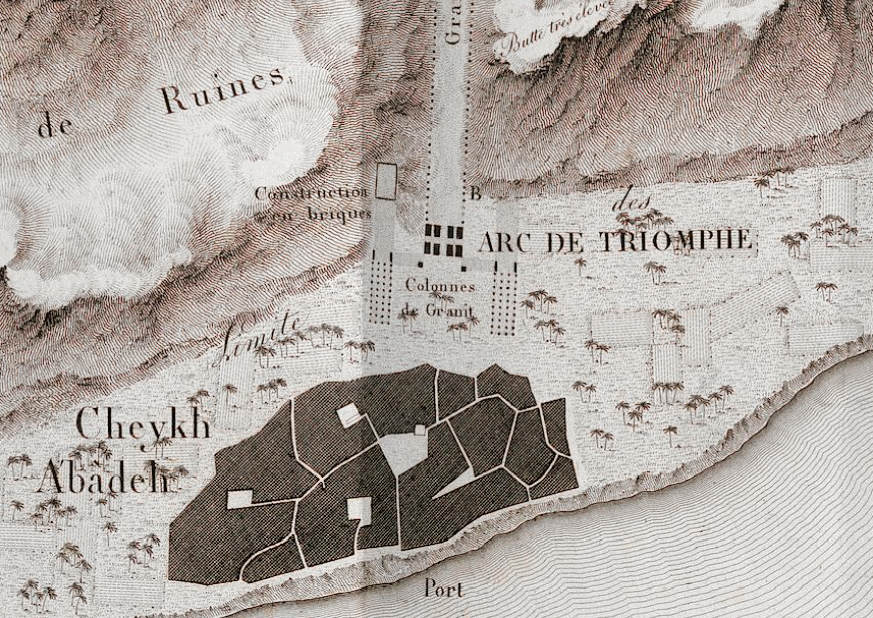 The gate is marked clearly, with two avenues of granite columns before it.  Notice the point B marked on it – this is the place from which the drawing below was made.

Zooming in on the modern image, nothing is to be seen.  The road from the north is plainly the Roman road, however.

It is amusing to note that Jomard marks palm trees in the area; and palm trees are still visible, their hard black shadows plain on the aerial photo.

Hadrian’s monumental stone arch is gone; but the palm trees that once stood nearby remain.

Jomard gives us this impression of what it looked like, looking from Antinoupolis west towards the village and the Nile. 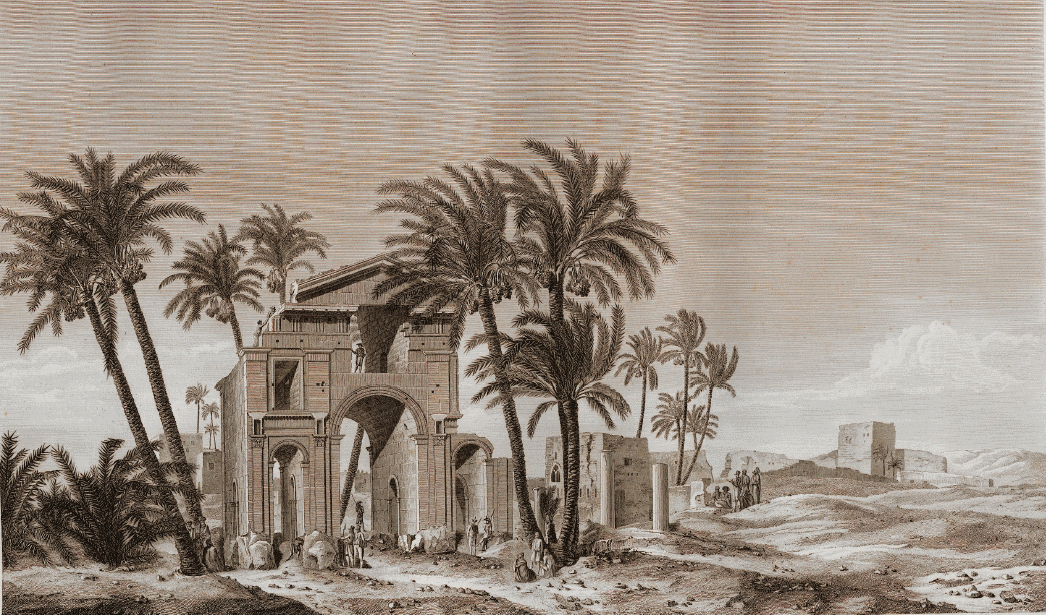 I would surmise that the side facing the village had suffered more losses of stone.

Jomard also gives detailed measurements and drawings of elements of the arch.

In his “explication des planches” in the same volume, he gives the following description of the scene.

This monument is the best preserved in the whole city.  Nothing is missing from the edifice that would make its restoration at all doubtful.  In front of the little Corinthian pilasters, there were granite columns, which are all missing; only the pedestals remain, and these are very ruinous, as may be seen in the engraving.  In front of the triumphal arch, the village of Sheikh Abade may be seen; between the houses and the monument are the columns of granite that still exist (see the explanations of plate 58 and 53).  The date palms, which are very numerous around the building, contribute to render this view one of the most picturesques of the ruins of Antinoe.  here and there some villagers can be seen, attentively watching the French engineers and artists engaged in recording the triumphal arch.

Plate 58 consists of plans and elevations of the arch, and the “explication” of measurements.

The note for plate 53 mentions that the engraver has drawn too small the streets in the village of Sheikh Abade.

I do wish that it was possible to safely visit the site today.  Doubtless an archaeologist with local contacts could do so; a lone tourist might risk abduction.

4 thoughts on “Returning to Antinoupolis by satellite photo”