I was reflecting on the career of Josef Stalin, the brutal bandit from the Caucasus, who rose to become Soviet dictator, and enslaved, first a huge nation, and then half of Europe.  He had total power.  The only thing that he could not control was death.  One day death came for him, and his empire crumbled soon after. 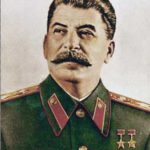 But what if he had had the choice, about whether to die or not?  We can be sure that he would have chosen to live.  Would Stalin still be ruling his empire from the Kremlin, even today?  It would be a brave man who would bet against it.

From time to time men arise, and impose their wills upon their fellow men.  A movement, an ideology, a class, a society.  We might like to think that the well-meaning will prevail; but it is not necessarily so.

We do not need to invoke the shade of Stalin, even.  If any of those scientists who are investigating age should ever find a “cure” for death, we may be sure that it will not be available equally.  An undying elite will arise, comprised of the wealthy and powerful, looking down, we may be sure, on all the “deplorables”.  Such men tend to despise those not like themselves.  History does not suggest that such a gilded elite will be a good thing.

However all men die, and so every tyranny has a limit.  We can escape from every monster, given time.

In Niven and Pournelle’s Inferno, a retelling of Dante, the fact that the damned cannot die, but can continue to suffer, is exploited by the devils as a way to impose sufferings impossible on earth.  But in reality men die, and thereby they can escape from their suffering, which is mostly caused by their fellow men.

In Genesis we learn that death was the penalty for the sin of Adam.  But if we look at it like this, then, like most things that God does, it was a mercy.  No undying tyrants shall reign forever.  No man shall suffer beyond a certain point.

In Greek myth, Tithonus was granted immortality, but not eternal youth.  In consequence he soon became incredibly old and withered, and was finally transformed into the cricket.  In a world where men can live forever, they must likewise receive eternal youth; but also sinlessness, for otherwise they will certainly become tyrants.  I fear that curing sin may be rather beyond the powers of our scientists, however.

We live in a  broken world, and all sorts of awful things happen within it.  But some of those things may be benefits, if we did but consider the alternatives.  In a world where all men are sinners, then we truly need some of these things.  Let us be grateful for death.

2 thoughts on “If death did not exist, would Stalin still rule in Russia?”