It’s always nice when my blog posts attract attention. I learned last week that an old post of mine, from 2013, has attracted a response from a professional atheist polemicist named Richard Carrier. In a rather excitable post here on his own blog he roundly denounces my casual remarks, and indeed myself (!), and offers a new theory of his own. A correspondent drew my attention to this, and asked me to comment.

My original post was written after I happened to see an article by the excellent Josephus scholar Louis Feldman. This tentatively endorsed the fringe idea that Eusebius of Caesarea (fl. early 4th century) may have composed the so-called Testimonium Flavianum (TF), the rather odd passage in Josephus Antiquities 18 which mentions Christ.[1] This claim is not one that anybody has previously had much time for, and I didn’t see any purpose in rebutting it. Feldman was only summarising work by others, I felt.

But then I saw something interesting. The article made the claim that, if you search the Thesaurus Linguae Graecae database for a phrase towards the end of the TF, “And the tribe of Christians has not died out even to this day” (eis eti te nun – even/still to this day),[2] then it gives a bunch of hits in Eusebius’ works, and pretty much nowhere else.

I do computer searches. I’m interested in Eusebius. So I did the search for the phrase, but I got only a handful of results. Disappointed, I blogged about it, added some cautions on rushing to conclusions from these kinds of matches, and thought no more about it.

Last week I learned that, after four years, Richard Carrier has written a blog post in which he asserts rather over-enthusiastically that I simply did the search wrong – that instead I should have searched for eis eti nun; the te is just a particle, with the vague sense of “and”, and the two phrases are pretty much the same in meaning. Of course the two are indeed more or less identical in meaning.

Carrier’s search produces splendid results. It gets 94 matches.[3] Of these, 6 are later than Eusebius; one each in six authors. The other 88 are entirely in Eusebius. In other words, practically nobody in all Greek literature ever uses the phrase other than Eusebius, if we can trust this search.  It looks like the claim that Eusebius wrote the TF is proved!

But 88 out of 94 is not just a good result for the theory. It’s a fabulous result! In fact, it’s too good to be true. It’s like a Soviet election result with 99% voting for the official candidate. The number is supposed to produce confidence in the result, and does the opposite. It’s a sign that we need to sanity-check what we are doing.

Doing so produces instant discomfort. Surely “even to this day” is a trivial phrase? Are we really saying that Eusebius invented something as obvious as that? It seems unlikely. Imagine a Greek, complaining about his neighbour, as man has done since time immemorial. Would he not say, “How long has this been a problem?” “Oh it started when we landed, and it has continued even to this day.” How else would you express that idea?[4]

In fact, if we look at little further we find that the idea in rather similar words is indeed kicking around well before Eusebius, six centuries earlier, in the third century BC.   Apollonius Rhodius uses the idea in his Argonautica. He uses it to tie together past and present, in precisely the way that Eusebius does. [5]   The historian Polybius uses it, the poet Callimachus uses it. Nobody in our corpus uses it like Eusebius does; but then nobody is writing quite the kinds of works that Eusebius is.

So why didn’t these authors appear in the results, when we do the search? Because these rely on searching for versions of eiseti nun, which differs only by a word-division and means much the same thing.[6] We can omit te; we can replace it with the stronger equivalent kai; we can run eis and eti together, especially when we know that Greek manuscripts did not feature word division.  Any claim that depends on the presence of a space in the text is a pretty fragile one.

In fact there are quite a number of things we can do to twiddle the search, once we start thinking about it. Let’s just give the numbers from the TLG for a few versions of this search string, all of which mean much the same:

All of these do show significant use by Eusebius. Some of these show pre-Eusebian use; others don’t.

In fact Carrier is quite well aware of the pre-Eusebian results, which he proceeds to mention briefly in a paragraph that reads as if it was tacked on afterwards.   But it’s terrible stuff. Clement of Alexandria is just a Christian, so he doesn’t count (?!).  Polybius doesn’t count because no other historical writer after him uses this phrase.  In fact Carrier has changed his argument; from “only Eusebius uses this, so it proves that Eusebius forged the TF” – a defensible argument, if wrong – to “Eusebius uses this more than anyone, so that proves that he forged the TF”.  Which, of course, it does not.  Carrier has defeated himself.[7]

Here’s the rub; the success or failure of our search comes to depend on us, on our judgement, on our ingenuity, on our knowledge of Greek.   This subjectivity was precisely why, in my first blog post, I never proceeded beyond the exact match.

There are further possible issues with this method. Only 1% of Greek literature has survived. Much of that is biased towards technical, classical or ecclesiastical writings, those that were useful to copyists in the Dark Ages. The TLG contains only a portion of that 1%. Someone who knew more about computational linguistics than I do could easily point out more problems. 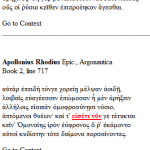 The database itself is not “clean”;[8] it is comprised of texts edited by many different editors, whose choices from the manuscript tradition will reflect their preferences. One example of this may be found in searching outside the TLG for eis eti nun. The TLG gives no hits before Eusebius. But I find that the 1831 R. Klotz edition of Clement of Alexandria, Protrepicus, has three hits for it.[9] In the TLG, based on the GCS edition, eis eti is replaced by eiseti. There is no indication in the apparatus as to why. The results of each database search are therefore a reflection of editorial choices.

Stylistic analysis, whether manual or automated, can be something of a trap. It’s terribly easy to forget how little we really know about the texts before us, the language which none of us speak as a native and which changes considerably over the thousand years before us, the vagaries of editors, the influence of ammanuenses and copyists, and of the non-literary spoken language, which surrounds the literary text like a warm bath at every instant but is almost invisible to us.

Now let’s go back to where we started. The argument in Feldman’s article was that the use of this phrase proved that Eusebius wrote the TF.   We don’t want any implicit assumptions here, so let’s lay the argument out explicitly.

The second point is correct. Eusebius does use the eis eti nun phrase extensively, once or twice in every book of the Church History, and elsewhere.

But the first point is dodgy, and so is the third. We have seen that in fact we do have evidence of its use for 6 centuries before Eusebius.

But let us suppose for a moment that the TLG searches did in fact show, as Carrier contended (before he discovered otherwise), that nobody used eis eti nun before Eusebius. The argument still is flawed. For this argument is an argument from silence – that we have no evidence that anyone else … so it must have been him. Arguments from silence are not valid.

The archaeologists never tire of telling us that absence of evidence is not evidence of absence. It is the first thing that we must remember. And we’re searching only a subset of 1% of Greek literature, as we saw.  According to Carrier this means that we don’t have any evidence of use before Eusebius … very well. But even then we don’t have all the evidence. We have only a fraction of it.

In conclusion, the claim that examining the use of eis eti nun proves that Eusebius composed the TF is not correct. The claim itself seems to involve an argument from silence. And the silence itself can only be sustained by ignoring the exact matches, using a related search, and then finding reasons to ignore other related searches.

19 thoughts on “Words, Words, Words: A response to Richard Carrier on Feldman and Eusebius”