When did Hero of Alexandria live?  The truth is that we know little other than what can be inferred from his works.

Karin Tybjerg[1] tells us that Hero quotes Archimedes, who lived ca. 287-211 or 212 BC, and is quoted by Pappus who flourished around 320 AD.  But it seems that in his Dioptra Hero refers to a lunar eclipse visible at Alexandria and Rome.  The only one that fits these criteria happened in 62 AD, around the time that St. Paul was released from house arrest in Rome, and also around the time that Mark’s gospel was being written.  Ptolemy (fl. ca. 127-158 AD) does not make use of Hero, which is perhaps an upper limit.

It has been speculated that a new model of water-organ, demonstrated to Nero in 68 AD, was probably Hero’s invention; which means that he might even have been in Rome at the same time as the apostles.  At his lavish new palace, the Domus Aurea, a new and ingenious technology entertains an emperor and his court.  Meanwhile, across the city the apostle Peter is addressing a humble congregation.  It is a reminder that the most important events of an era are not always the most heralded.

Hero’s Mechanics is about how to lift heavy weights.  The first two books go through a number of principles for doing so with limited power, while the third book describes designs for weights and presses.

I’ve come across another handbook which contains an English translation of some extracts.  This is G. Irby-Massie & P.T. Keyser, Greek Science of the Hellenistic Era : A Sourcebook, 2002, starting on p.168.  They are taken from Drachmann’s handbook which I have yet to see.[2]  Here they are:

There are many who think that weights lying on the ground are only moved by an equal force [contrast Aristotle, Physics 7.5 (250a11–19)], wherein they hold wrong opinions. So let us prove that weights placed in the way described are moved by an arbitrarily small force, and let us make clear the reason why this is not evident in fact. Let us imagine a weight lying on the ground, and let it be regular, smooth and with its parts coherent with each other. And let the surface on which the weight lies be flat, smooth and completely joined, and able to be inclined to both sides, i.e., to the right and the left. And let it be inclined first towards the right. It is then evident to us that the given weight must incline towards the right side, because the nature of weights is to move downwards, if nothing holds them and hinders them from movement; and again if the inclined side is lifted to a horizontal position and will be level [i.e., in equilibrium], the weight will come to rest in this position. And if it is inclined to the other side, i.e., to the left side, the weight will again sink towards the inclined side, even if the inclination is very small, and so the weight will need no force to move it, but will need a force to hold it so that it does not move. And if the weight again becomes level without inclination to either side, then it will stay there without a force holding it, and it will not cease being at rest until the surface inclines to one side or another, and then it will incline towards that side. Thus the weight that is ready to incline to whichever side, does it not require only a small force to move it, namely as much force as causes the inclination? And so isn’t the weight moved by any small force?

21.  Now, water on a surface that is not inclined will not flow, but remains without inclining to either side. But if the slightest inclination occurs, then all of it will flow towards that side, till not the smallest part of the water remains thereon, unless there are hollows in the surface, and small amounts stay in the bottom of the hollows, as happens often in vessels. Now water inclines like this because its parts lack cohesion and are very soluble.
As for the bodies that are coherent, since by their nature they are not smooth on their surfaces and not easily made smooth, it happens through the roughness of the bodies that they strengthen each other, and it happens that they lean upon each other like teeth, and they are strengthened thus, for if the teeth are numerous and closely joined, they require a strong and coherent force [to separate them]. And so from experiment people gained understanding: under tortoises [war machines: see Athenaios above, Section 6.9] they placed pieces of wood whose surfaces were cylindrical and so did not touch more than a small part of the surface, and so only very little rubbing occurred. And they use poles to move the weight on them easily, even though the weight is increased by the weight of the tools. And some people put on the ground cut boards (because of their smoothness) and smear them with grease, because thus their surface roughness is made smooth, and so they move the weight with smaller force. As for the cylinders, if they are heavy and lie on the ground, so that the ground does not touch more than one line of them, then they are moved easily, and so also balls; and we have already talked about that [1.2–7].

Since the powers by which a given weight is moved by a given force are five, it is necessary to present their form and their use and their names, because these powers are all derived from one natural principle, though they are very different in form. Their names are as follows: the axle-in-wheel [windlass], the lever [mochlos], the pulley [trochilos], the wedge [sphên], and what is called the “endless” screw [kochlia].

The third power [pulley] is also called the ‘‘multi-lifter” [poluspaston]. 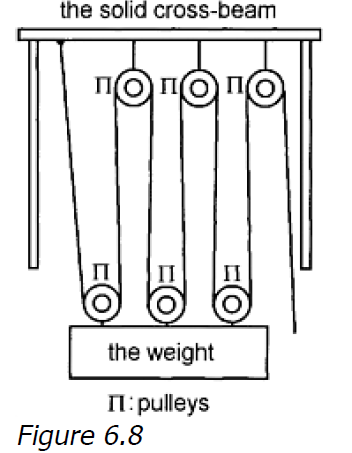 1. For the lifting of burdens upwards there are certain machines: some have one mast, and some have two masts, and some have three, and some have four masts. As for the one that has a single mast it is made in this way. We take a long piece of wood, longer than the distance to which we want to raise the burden, and even if this pole is strong in itself, we take a rope and coil it round, winding it equally spaced, and draw it tight. The space between the single windings should not be greater than four palms [ca. 30 cm], and the windings of the rope are like steps for the workers and they are useful for anyone wanting to work on the upper section. And if the pole is not elastic, we must estimate the burdens to be lifted, lest the mast be too weak.

2 This mast is erected upright on a piece of wood, and three or four ropes are  fastened to its top, stretched and tied to fixed points, so that the beam, however it is forced, will not give way (being held by the ropes). Then they attach to its top pulleys tied to the burden. Then they pull on the rope either by hand or with another engine, until the burden is raised [Figure 6.9]. 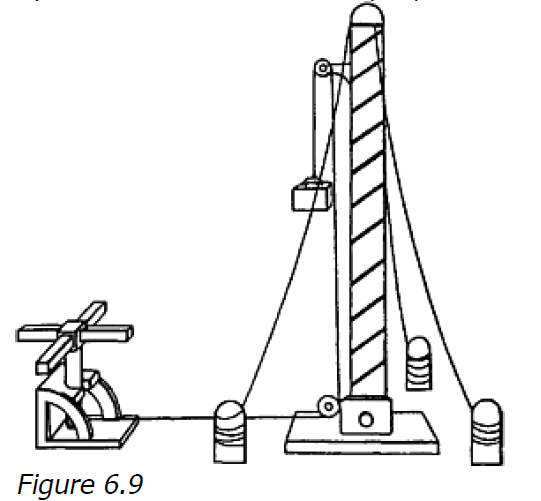 One thought on “The date of Hero of Alexandria, and another translation of some extracts of the “Mechanics””