The British Library manuscripts blog has produced a rather marvellous article by Matthew Nicholls on Ancient Libraries.

But what made it special to me was an image of an item which I had never seen before.

As we all know, ancient books were written on rolls of papyrus.  The modern book form or “codex” belongs to late antiquity.  But the title of the work in each roll was written on a parchment slip known as the sillybos, or sometimes sittybos – the literature doesn’t indicate which is correct – which protruded from the end, allowing the reader to find out which roll he needed without unrolling any of them.

Since Tyrannio has arranged my books, the house seems to have acquired a soul: and your Dionysius and Menophilus were of extraordinary service. Nothing could be more charming than those bookcases of yours now that the books are adorned with title-slips. Farewell. Please let me know about the gladiators: but only if they are behaving well; if not, I don’t want to know.

I am very grateful to you for going to see my house so often. Crassipes is swallowing all my travelling money. You say I must go straight to your country house. It seems to me more convenient to go to your town house, and on the next day. It can’t make any difference to you. But we shall see. Your men have beautified my library by binding the books and affixing title-slips. Please thank them.

A painting from Herculaneum shows an example of a roll with a sillybos dangling out of the end of the roll: 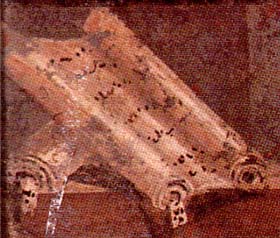 Matthew has posted here an image of one, attached to its original roll: 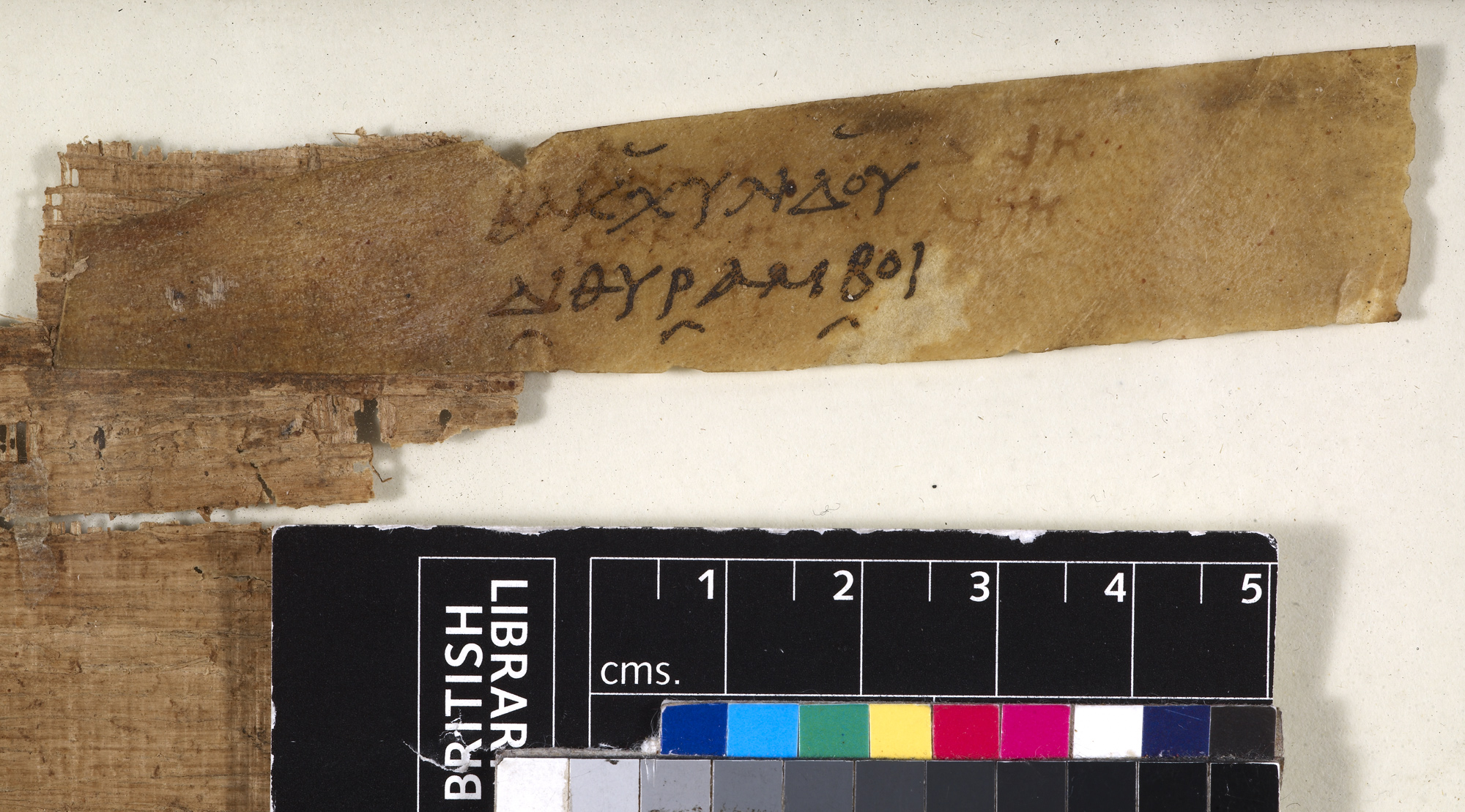 The slip has on it the name of “Bacchylides” – a poet of the 5th c. BC – with the title of the work, the Dithyramboi, underneath.  The bit of text attached is from the 17th dithyramb. The manuscript is BL papyrus 2056 (= P.Oxy. 1091), and is 2nd century AD in date.  It is, of course, from Oxyrhynchus, as is papyrus 733, the unique manuscript of Bacchylides’ poems.

It’s wonderful to see something like this.  It’s obvious how these could become detached, and a work could become anonymous and untitled.

Here is a parchment sillybos of the 1st-2nd century AD which became detached from a copy of the lost work, Sophronos, Mimes on Women. (I take this from Sarah Bond’s excellent article on the same subject).  This item is P.Oxy.II 304:

Another sillybos of the 1-2nd century is preserved from a copy of the 9th book of Hermarchus against Empedocles, POxy vol. 47, 3318. 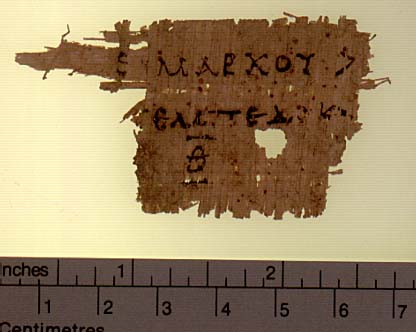 A 2nd century AD sillybos comes from a commentary (hypomnema) on the Simonidea, possibly the Sayings of Simonides, POxy 25, 2433: 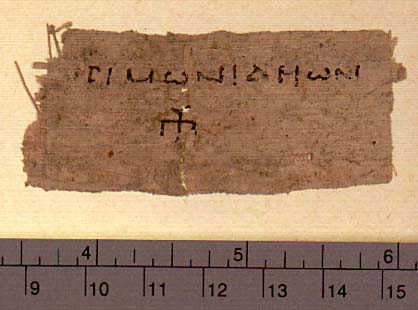 Even more interestingly, Dr B. tells us that a sillybos might be known as an index in Latin (although Cicero uses the Greek term), as we find in Livy 38, 56.  Here the lost speech of Scipio against Naevius (it looks as if Scipio was speaking for the defence) had Naevius’ name mentioned only in the sillybos, not in the speech itself:

[6] The index8 of the speech of Publius Scipio contains the name of Marcus Naevius, tribune of the people; the speech itself lacks the name of the accuser; it calls him now “a ne’er-do-well,” now “a no-good.”

Note that a number of other sillyboi may be seen at the Oxyrhynchus website here.

I was also able to find another ancient depiction of a sillybos, protruding from a roll in the paintings from Pompei.  I found this online here. 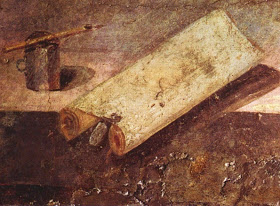