This morning I went into the Treasure Chest second-hand bookshop in Felixstowe.  This is an old-fashioned bookshop, full of 45,000 books, mostly paperbacks, which are available at very reasonable prices, is the very model of a seaside provincial bookshop.  It hasn’t changed in thirty years, as my own shelves testify.

I went straight to the classics section, where I found a row of Greek and Roman authors in the Penguin Classics series of translations.  Most were small, squareish, clad in the smart black covers of the late 70s editions. But a few were taller, and had the mauve strip at the top of the spine that characterised the change of style in the early 80s.  I always preferred the older style.

I came away with but a single volume, the 1981 edition of the Greek Anthology. 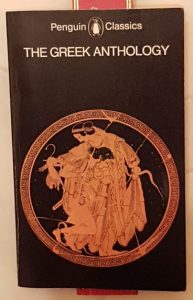 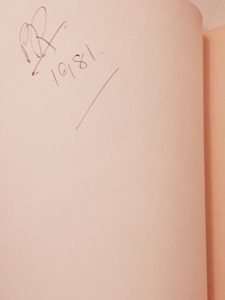 The volume is the 1981 edition, so “P.R.” purchased it new.  Clearly these are “P.R.”s books, now being sold for very little in a seaside second-hand bookshop.  They were not there a year ago, so it is a reasonable assumption that the dealer purchased them in the last few months, the winter of 2016-17.

Do others speculate about the mysterious inscriptions on covers and fly-leaves?  Or is it just me?  To me this volume says a number of things.  Maybe I am simply imaginative.

It’s hard to imagine anyone purchasing such a book unless he was doing a classics degree.  For who else, in the normal run of things, would read the Greek Anthology?  So “P.R.” was a student, probably at Oxford or Cambridge, in 1981.  In fact he must have been one of my own contemporaries.  My own set of Penguin Classics displays precisely the same mix of editions; mostly the older ones, but a few of the mauve-band versions. purchased in my last year, or soon after college before the pressures of life meant that idle reading became impossible.  “P.R.” didn’t use the book much.  Indeed it seems almost new and unread.  The only marginalia are two ticks in the bibliography, one each against the poetical versions of Barnstone, and of Bridges.

Alas, we can infer something else.  For there is only one way that a batch of books cherished for decades by a single owner come into a dealer’s shop after a winter.  “P.R.” died young.  He perished in the winter.  His relatives cleared his house, and sold his books in a job-lot to the nearest shop.  Perhaps he lived in Felixstowe, for why else would the books be here?  If he was 21 in 1981 – a fair assumption – then he died aged 57, which is young indeed.

Who was he, this classical man who died young?  Did he retire young, to a seaside cottage, after a successful career in the city?  Or was he perhaps a teacher, worn out by the stresses of the modern teaching system, who died in harness?  We cannot say.  He was some mother’s son, some girl’s true love, some child’s “daddy”.  But he is gone, as we must all go some day, into “death’s dateless night”.

Thank you anyway, whoever you were, for loaning me your book.  For of course nothing is permanent.  One day it will be my books on that shelf, being pored over by strangers.  So this purchase is, in reality, only a loan for a few decades.  Then back onto the market it will go!

Should we sign our books, as “P.R.” signed his?