A kind correspondent (R. Fassaert) has sent me an image of one of the plates in the new Atlas of Ancient Rome, featuring the huge temple on the Quirinal Hill in Rome, about which I have written a series of posts.  The temple was thought to be Aurelian’s Temple of the Sun; then a Hadrianic Temple of Serapis; and the authors of that Atlas propose that it was a temple of Hercules and Dionysius.

“Tab.192” includes a plan and section by a certain “G. da Sangallo”.  The image I have is low-resolution, but looks intriguing:

Of course it may be to some extent a reconstruction.  But where is it from?

In common with many other sources, the Atlas leaves the reader at a loss.  Engravings apparently magically appear.  But I wondered if anything might be online.

The author turns out to be Giuliano da Sangallo (or San Gallo), who died in 1516.  Italian Wikipedia has an article on him, from which I learn that he was a true renaissance man, who started with wood-carving and went into architecture and much else.

The notes tell me that manuscript of sketches is preserved in the Vatican in Ms. Barberini lat. 4424.  My friend J.-B.Piggin provides a link to the manuscript online, which is here.  It’s also now possible to save individual pages to file, which is most useful, as we shall see.

On first sight it did not contain what we were looking for.  But a further search for da Sangallo and the Quirinal[1] led me[2] to a really useful article at Academia.edu by Dr Cammy Brothers, precisely about Da Sangallo and the temple on the Quirinal hill.[3]  This tells us that there are 7 drawings, all in the Barberini codex: on fol. 10r, 60r, 60v, 68v.  The plan and section are folios 65r and 65v.

But looking at the manuscript, the reader is puzzled.  Folios 65r and 65v are blank.  Fol. 10r contains nothing relating to the Quirinal temple.  68v is blank.  The page numbers are corrupt.

Like all these online interfaces, it is hard to use as first.  But it got easier as I worked with it.  I found, by scanning through the thumbnails, that the images of the section and plan are in fact folios 57r and 57v.  The top of 57r is a bunch of figures from the arch of Severus in Rome.  So here’s the bottom of that page:

I cannot make out the writing, however, even at maximum resolution, however.

Here’s the plan of the temple, on the next page, slightly edited.

Can any reader make out the writing?

Folio 60v does indeed show the pediment of the temple, before its demolition, on the left. 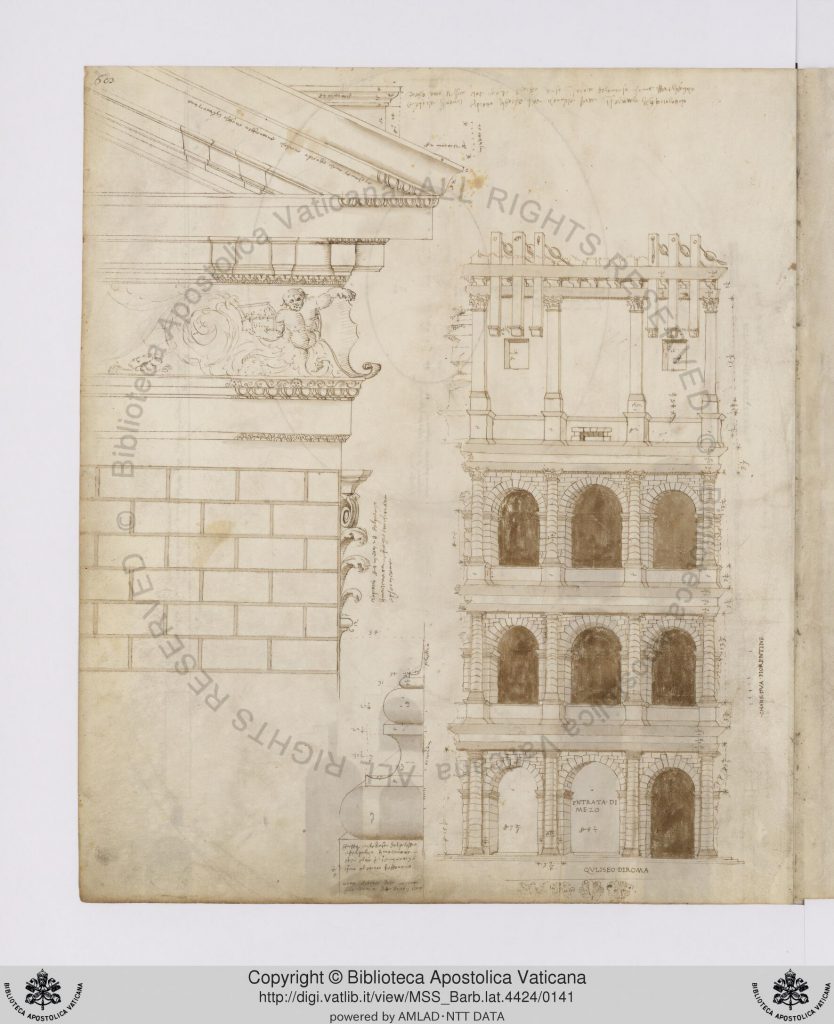 (One must deplore the vandalism of the circular Vatican logo across the picture, and I hope that the curators recognise how obnoxious this is, and remove it.)

It is perhaps likely that Dr Brothers did not consult the manuscript, but rather the reproduction by C. Hülsen (1910).[4]  Maybe this had different folio numbers.

I cannot recommend too highly the article by Cammy Brothers. It is a treasure trove.  It contains reproductions of other drawings, and also calculations of the size of the monument as it then was.  It also contains computer-generated reconstructions.  In short it is a very useful article indeed, which I only encountered by accident.

The Barberini codex is not the only online item by G. da Sangallo.  Wikipedia also told me of a “Sienese sketchbook” (Taccuino senese), held at the Biblioteca degli intronati in Siena.  Rather to my surprise, this also proves to be online, although in a 1902 anastatic copy, at Google Books here.  But it had no material on the temple.

It all goes to show that, with a little effort, it really is possible for a non-specialist to locate these drawings.  How fortunate we are to live in the age of the internet!

Let’s finish with a striking image, not of the Quirinal temple, by Da Sangallo which I found on Wikimedia Commons.  Apparently it depicts the ruins of the Basilica Aemilia in 1480!

But once again this is actually from the Barberini Codex, fol.28r.[5]

It is nice to make use of a Vatican manuscript from a hotel room.  This would hardly have been dreamt of, even a few years ago.

2 thoughts on “A renaissance engraver: some notes on G. da Sangallo and the Quirinal temple”