This week I came across a saying online:

A society grows great when old men plant trees in whose shade they know they shall never sit.

This, we are told, is a Greek proverb.

The sentiment is unexceptionable, but readers of this site do not believe attributions without evidence.  Is this truly ancient?  If so, how do we know?

A search on Google Books produces many references to this saying, varying somewhat in wording: 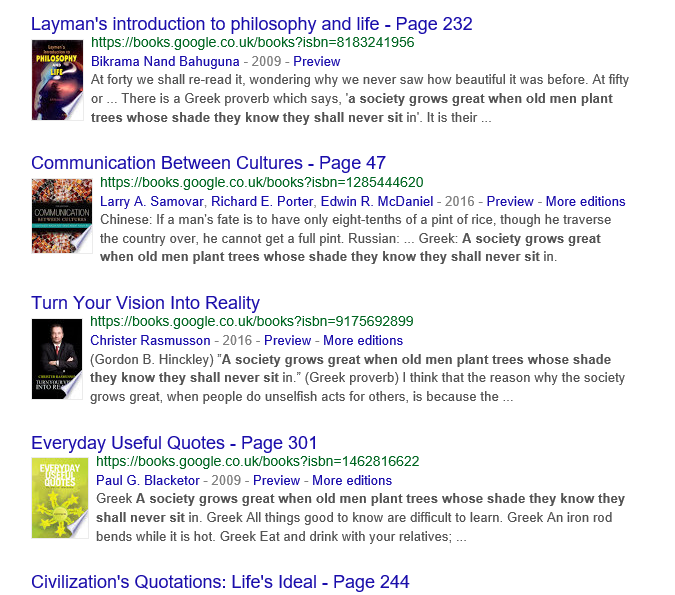 But if we use the custom date range, we quickly discover that the results vanish before the mid-1980s.  In the 1990s we get various results, mainly from the Congressional Record of the US Congress: 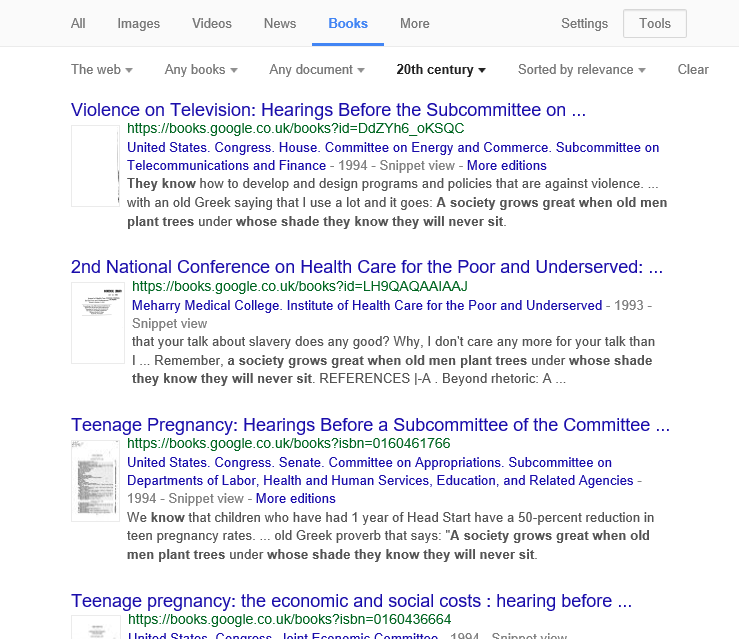 Eventually I happened to find a quote which atrributed it, not to ancient Greece, but to a certain Dennis Waitley: a 1989 article in the Scholastic Coach, vol. 59, p.289:

We use Dennis Waitley’s definition of a winner: “A winner is a person who plants a shade tree knowing he or she will never sit under it.”

This has the right sort of sound about it.  Waitley turns out to be a 1980s motivational speaker.  I was unable to locate in which of his books he said this.  But in fact I have just found another source, from 1972, in the Lutheran Standard, vol. 12, p.16:

A man has made at least a start on discovering the meaning of life when he plants shade trees under which he knows he will never sit.

This is only visible in snippet view.  But this version of the saying takes us further back yet.  It is associated with a David Elton Trueblood (or D. Elton Trueblood), a Quaker, in 1955.

Yet even so I can find a reference from 1954, in a mysterious Annual Report of a Ministry of Agriculture, page 13:

A man only begins to grasp the true meaning of life when he plants a tree under whose shade he knows he will never sit.

At her departure, we are reminded of the passage from Elton Trueblood’s The Life We Prize, which she so often quotes: “One has to come to the full meaning of life when he is willing to plant shade trees under which he knows full well he will never sit….

The Trueblood book was printed in 1951, earlier than any reference I can find.  And on p.58 we read our quote:

A man has made at least a start on discovering the meaning of human life when he plants shade trees under which he knows full well he will never sit.

That, I suspect, is the real origin of the proverb – a volume of moral writing by a quaker in 1951.  The aphorism then trickles through popular magazines, changing as it goes.  Ronald Reagan uses it in 1983.  But it seems to become a “Greek proverb” only in the hands of US congressmen in 1993.

33 thoughts on ““A society grows great when old men plant trees in whose shade they know they shall never sit” – an ancient Greek proverb?”