How many of us know that there is a papyrus with the handwriting of a Roman emperor on it?  I certainly did not, until I learned of it from a tweet by Richard Flower.  But so it is.

The papyrus comes from Elephantine in Egypt, the island of Philae, opposite the modern town of Aswan, which is ancient Syene.  Papyri from the island were sold to dealers throughout the 19th century; some excavation took place in the early 20th, first by a German expedition, then a French.  Shockingly, while the Aramaic and Greek papyri discovered by the German excavators have been published, most of the Demotic, hieratic and Coptic papyri remain unpublished.[1]

The writing is by Theodosius II, who died in 450 AD after falling off his horse, and is dated to 425-430 AD.  The bishop of Syene, who had an Egyptian name, Appion, had written to the emperor (in Greek).  Nubian raiders were attacking the town.  The bishop asked for soldiers to protect it.

The emperor’s reply is not preserved, but a copy of the petition was attached to it, and on it some words in Latin, which are generally thought to be the emperor’s own hand.

The papyrus is now at Leiden, where the papyri were given letters, A-Z.  This is Leiden Papyrus Z (P. Leid. II. Z), catalogued here.  The papyrus is online at the Rijksmuseum in Leiden here.

It’s hard to even see the lettering on the papyrus, which is only written on the recto side.  Click on the image for a larger one, or visit the Rijksmuseum site for more photographs. 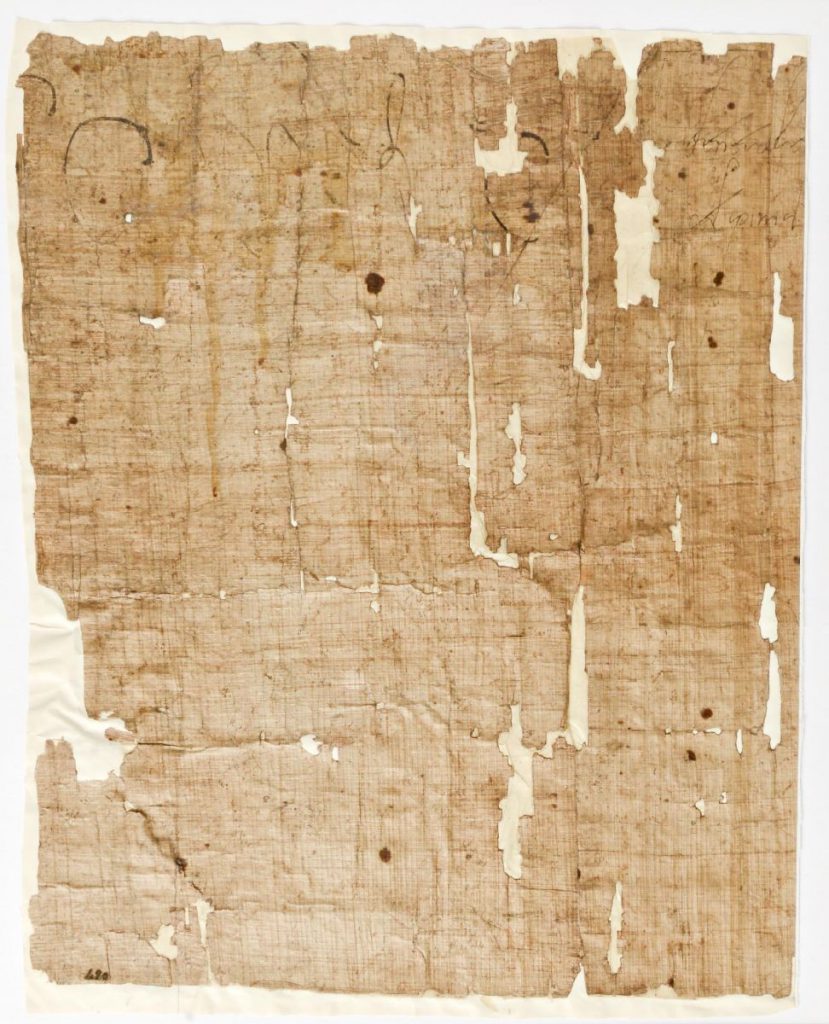 The emperor’s handwriting is at the top right of the sheet.  I’ve autoleveled an extract here: 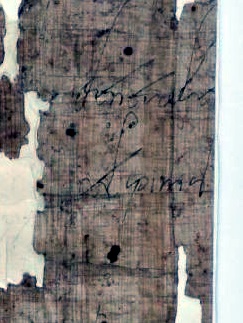 Apparently the emperor wrote, “…bene valere te cupimus”, i.e. “…we desire that you be well.”

The document is translated for us in B. Porten &c, The Elephantine Papyri in English, 1996, p.441, entry D 19.  It is in two columns.  The first consists of an unreadable line, followed by the emperor’s words.  This is all that is left of the imperial reply.  The second column, headed by a Latin title “copy of the petition” contains the Greek text, written by a scribe.

For interest, here is the translation, slightly smoothed out:

Address to the masters of land and sea and every nation of mankind, Theodosius and Valentinianus, the eternal Augusti, petition and supplication

From Appion, bishop of the legion of Syene and of Contra Syene and of Elephantine, in your province of Upper Thebaid.

Your Benevolence is accustomed to stretch out a right hand to all who are in need. Therefore I too, having learned this clearly, have come to these petitions, the matter being thus:

Situated with my churches in the midst of the sinful Barbaria[ns], the Blemmyes and the Nobadae, we are subject to many stealthy attacks by them, with no soldier protecting our places.

Therefore, since the churches under me have been humbled and are unable to protect the very ones who flee to them , I prostrate myself, rolling on the ground before your divine and immaculate footsteps so that you deem it right to decree that the holy churches [under me] be guarded by the soldiers among us, and that they obey me and heed me in all matters, just as the soldiers stationed in the fortress so-called “of Philae” in your Upper Thebaid will be at the service of the holy churches of God in Philae.

For thus we will be able to live without fear […] and follow […] most stern decree […] being issued against those who have transgressed […] what has been divinely ordained by you, every deceit of an opposing party, past or future, being null and void, with your divine [… and] special grace in this matter being addressed to the most magnificent and conspicuous count and duke of the frontier district of the Thebaid.

And having obtained this, I shall send up the customary prayers for your eternal power for all (time).

Apparently nothing in the archive of other papyri suggests that the request was honoured.

The request reminds me a little of the Donation of Constantine.  It has been suggested that this was originally composed in the 6th century during the Lombard invasions of Italy.  The idea is that it was a way for the Bishop of Rome to gain control of the remaining Byzantine garrisons, in order to protect the city.  Bishops were figures of authority in their communities in the late empire, and perhaps this story could be replicated wherever the secular power began to fail.

But how exciting to see the handwriting of a Roman emperor!

10 thoughts on “The only surviving handwriting of an emperor: Theodosius II and a petition from Aswan”