An interesting claim on twitter a few days ago began:

On this date in ancient Rome, the annual Festival of Attis and Cybele began with a procession of reed-bearers to commemorate the finding of the infant Attis among the reeds.

This instantly suggested a parallel with the baby Moses to me; and hence, the fear that this might be one of the “Jesus is really Attis” headbangers.  In fact there is more to this; and it is quite interesting to which bits of this are actually attested.

It isn’t hard to find the claim elsewhere, in respectable sources.  For instance Antonia Tripolitis, Religions of the Hellenistic-Roman Age, Eerdmans (2002) p.34 discusses a series of events celebrating Cybele in March and states:[1]

The festival began on the Ides of March, March 15. On this day, a six-year-old bull was sacrificed by the cult’s high priest, priestess, and cannophori, or reed-bearers, for the purpose of promoting the fertility of the mountain fields. The cannophori then carried reeds to the temple of the goddess. This is believed to be a commemoration of the early days of Attis based on an early version of the legend. According to the legend, Attis as a child was abandoned among the reeds by the banks of the Gallus River and was rescued by shepherds who raised him.[2]

The day of the Canna intrat marked the beginning of the ceremonies. The college of the cannophori – evidence for which at Ostia oscillates between the end of the 2nd and the beginning of the 3rd centuries [102] – was connected specifically with this feast day in which, probably, were remembered the birth, the exposure and finally the rescue of little Attis on the banks of the river Sangarius [103].

There is actually a minor mistake here: the river is Gallos, not Sangarius, the name of Attis’ grandfather.

On the other hand Grant Showerman, “Canna Intrat and the Cannophori”, Classical Journal 2 (1906) 28-31 (JSTOR) makes plain that much of this is speculation.

The theory that the infant Attis was found among the reeds seems to be that of Decharme, in Rev. archeol. 1886, I, p.288 f.  Not everyone agrees.

So let’s proceed to the sources.  These are largely very late, and we know that the ceremonies of Cybele developed during the first few centuries AD.  So how much of this is representative of anything but 4th century paganism may be questioned.

The Chronography of 354, section 6, also known as the Philocalian calendar, simply states “Canna Intrat” – “the reed enters” against the 15th, the ides of March.  There is nothing associating this with Cybele here.  It’s just a list of events.

49. On the Ides of March,[45] there is a festival of Zeus, on account of the mid-month, and public prayers that the year will be healthful.  And they would also sacrifice a 6-year-old bull on behalf of the mountain country, under the leadership of the high priest and the “reed-bearers”[46] of the Mother.  And [106] a man clothed with a goat-skin would be led in, and they would strike him with long, slender rods, calling him “Mamurius.”  …

This does associate “reeds” and “reed-bearers” (cannophori) with both the ides of March, and with Cybele, the Great Mother.  It is, therefore, reasonable to associate “canna intrat” with the rites of Cybele.

Julian the Apostate, in his Hymn to the Great Mother (Oration 5) states:

… we regard this Attis as the generative Power and the Gallos at one and the same time—-him who, as Fable tells, was exposed by the side of the streams of the river Gallos, and there grew up, and afterwards, when he had got tall and handsome, became the favourite of the Mother of the Gods, and she committed to his care all other things, and placed upon his head the star-bespangled cap.

Sallustius, On the gods and the world:

Now the Mother of the Gods is the principle that generates life; that is why she is called Mother. Attis is the creator of all things which are born and die; that is why he is said to have been found by the river Gallus.

Both Julian and Sallustius are aware of a legend connecting the origins of Attis to the river Gallos, and even that he was exposed there.

A cista from Ostia, dedicated by the Archigallus M. Modius Maxximus is our next piece of data: 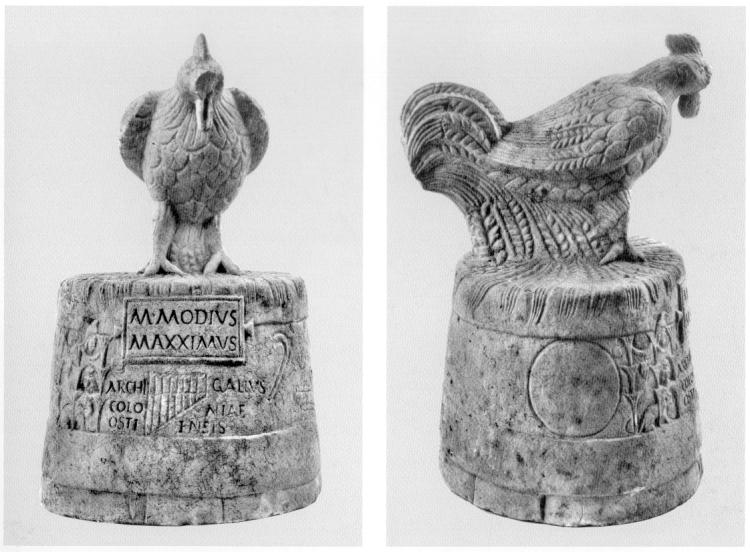 I copied the image from here.[4].  The inscription tells us that he was Archigallus of the colony of Ostia (CIL XIX, 385).  Although the image above does not show it, supposedly the head of Attis appears in the reeds alongside the head of a lion, and the head of Zeus, or possibly a river.  That said, Hepding says that while Decharme could see the head of Zeus Idaios; Visconti saw the head of a lion, and he could only see a plain head.[5]  According to Clement of Alexandria, Protrepicus 2.19 and scholium,[6] these items contained the severed genitals of the castrated Attis.[7]  Obviously if this does show the child Attis, reeds, and the river, then this is very interesting; but there seems more than a little doubt!  I shall look further into this.

A further item is “a bronze statuette at Toulouse, showing Attis holding in one hand the syrinx and in the other a sheaf of reeds.”[8].  This item is listed by Vermaseren in the Corpus cultus Cybelae attidisque (CCCA) 3, p.146:

It is noteworthy that Vermaseren thinks it is corn, not reed that is held here.  Here’s the item (click for a larger image) from here. Toulouse, Musée Saint-Raymond, inv. 25560: 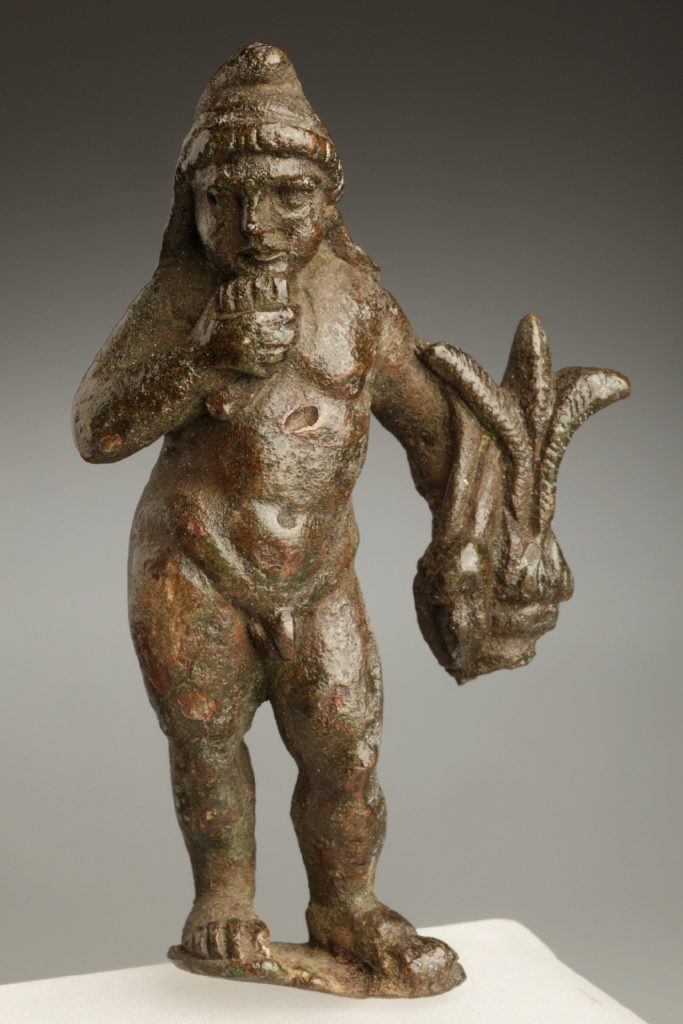 What exactly was the significance of this parade is still very uncertain. Nothing final can be inferred from the Ostian cista of M. Modius Maximus, the archigallus or high priest of the Cybele cult, representing the head of Attis flanked by reeds (CIL XIV 385); nor from a bronze statuette at Toulouse showing Attis holding in one hand the syrinx and in the other a sheaf of reeds.10 The most likely interpretation is that the festival recalled the finding of the infant Attis by Cybele on the banks of the river Gallos, where he had been exposed at birth by order of his grandfather Sangarios.11

The finding of Attis by the river is attested.  The reed-bearers are attested as associated somehow with Attis and Cybele.  That reed is associated in the myth with the birth of Attis seems plausible, although nothing actually says so; only that he was found by the river.  Reeds are associated with him on the two monuments.

So we have to say that we simply do not know what the canna intrat actually signified.  The reed-bearers get up to something on that date.  What did they do?

Was it “the finding of the infant Attis among the reeds”?  Maybe.  But the sources do not say so.

One thought on “Canna intrat: “Finding the infant Attis among the reeds”?”