Weird websites can be a lot of fun!  Often they get hold of some obscure fact, which might pass us by.  It can be interesting to track it down.  I was reading Twitter earlier today and came across a series of tweets by an Islamic propagandist, one of which mentioned the Acta Sanctorum.  The page is headed How the Gospel of Barnabas survived.

The modern “gospel of Barnabas” is extant in Italian and Spanish, and was written in the renaissance by a renegade who converted to Islam.  It references events after 1300, so cannot be ancient.  The page is dedicated to proving that it is.

Here’s the claim that caught my eye:

In the fourth year of Emperor Zeno (478 C.E. ), the remains of Barnabas were discovered and there was found on his breast a copy of the Gospel of Barnabas written by his own hand. (Acia Sanctorum Boland Junii Tom II, Pages 422 and 450. Antwerp 1698).

All spelling as found.

Now I don’t believe for a moment that this is the actual source used by the author of that web page.  It’s clearly something copied from some undisclosed source.  But as it happens I have been collecting URLs for the original edition of the Acta Sanctorum.  So let’s go and look at these references!

It took little time to locate a copy of June volume 2, in the original Antwerp 1698 edition.  It’s on Google Books here.  For some strange reason they display it online in colour, but download is only in black and white.

The reference to p.422 can be briefly disposed of.  The text starts on p.421, and, as a note in the margin of p.422 makes plain, this is the text of the introduction by the Bollandists; “auctore D.P.”, in fact!  It is not an ancient or medieval text, although it quotes some ancient references.  In the right hand column, a few lines from the bottom, we read that the body of the apostle was found “& Evangelium supra pectus positum”.  Then at the end, we get a quote from Theodore Lector, writing around 520, and taken from a collection of assortments published in the Bibliotheca Patrum:

The relics of the apostle Barnabas were found in Cyprus, buried under a tree, having on his chest a gospel of Matthew written by Barnabas’ own hand.  But that Zeno established that gospel under another crown.

I.e. this is the disposition of the relics in the monastery. 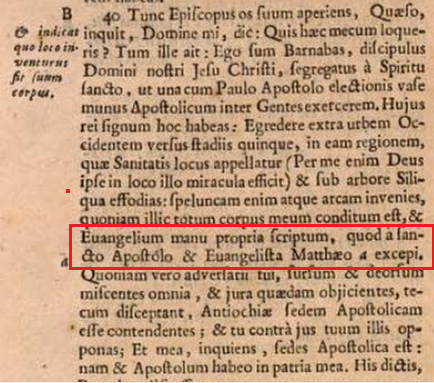 It’s plainly Barnabas speaking, presumably in a dream, instructing someone where to find his body:

… and a gospel written in my own hand, which I took down from the apostle and evangelist Matthew (a).

It is, in fact, a copy of Matthew, not Barnabas, that is in question.  But there is a footnote here, which is also worth looking at, on p.452.  This is rather remarkable:

a.  The natural sense seems to be, that Barnabas a gospel, originally written in Hebrew, with his own hand took down from the very mouth of St Matthew, speaking it in Greek, and bore it with him; just as is also said of St Bartholomew; perhaps many others, of  one and the same outlook and time, on this side of any difference….

The note is signed DP, which is a name of great authority – the Bollandist Daniel Papebroch.  The inference depends on the word that he rendered “excepi” – “took down”.  Unfortunately I don’t find the Greek text in the original at all readable – and that is the key here.

Fortunately others have read it, and printed the text.  The 19th century Paris reprint of the AASS is a bit easier to read.  July vol. 2 is here, although pagination etc is not the same.  Our section 40 is on p.445.

This seems to me to read “ἐξελαβον“, “I received from”, aorist.  It could indeed mean that Matthew dictated to Barnabas; but it need not.  Indeed the sense of dictation does not seem to be natural here.

But of course Papebroch was an expert, and I am not.  All the same, I can’t help feeling that he misunderstood his text here.  I don’t see any suggestion of a “gospel of Barnabas”; just of a written copy of Matthew in the hand of Barnabas, just as with Theodore Lector.

Alexander the monk seems to be a shadowy figure, who belongs to the 6th century.  The Wikipedia article mentions several scholarly articles, some giving a date as late as the 9th century, although I have not read these.

Fortunately a pre-print article by Chrysovalantis Kyriacou, “The Encomium on St Barnabas by Alexander the Monk: ecclesiastical and imperial politics in sixth-century Byzantium”, taken from an upcoming volume is online here.  This very useful article tells us much about the text (which has been edited critically since the Acta Sanctorum!), its manuscripts, and even discusses this question of “a gospel”, in note 49.  But he, like myself, sees only a copy of St Matthew here.

UPDATE: I find that the story that I am looking into is to be found in the Ragg translation of the Gospel of Barnabas, which has a long, copious and well-researched introduction.  On p.xlv of the introduction is the reference above, but the body of the text makes plain that the gospel found with the body of Barnabas was a gospel of Matthew.  So somebody has quietly ignored that.