The first evidence in the archaeology of St George is from a little church in Syria, in a town called Izra, or Izraa, or Ezra, or Ezraa, or Zorava, with the usual Semitic indifference to vowels, and the usual consequent confusion.

Here is the relief, in a nice new modern photograph from here.  I spent a profitable hour thrashing Google before I located it.

The text is as follows:

The abode of demons has become the house of God. The light of salvation shines where darkness caused concealment. Where sacrifices to idols occurred, now there are choirs of angels. Where God was provoked, now He is propitiated. A certain Christ-loving man, the town-councillor (proteuon) Ioannes, son of Diomedes, offered a beautiful building to God from his own offerings, after installing within it the worthy relic (leipsanon) of the martyr George, who appeared to this Ioannes not in a dream, but manifestly. In the 9th (indiction?) year. The year 410 (?).

The era is not AD, of course, which had yet to be invented, but the era of the Arabian province.  This gives a date of 515 AD.

This splendid transcription, and much else, I owe to Paweł Nowakowski, Cult of Saints in Late Antiquity Database, E01754 – http://csla.history.ox.ac.uk/record.php?recid=E01754.  This had a wretched photograph, from IGLS 15/1, 244, which shows what rubbish scholars have to endure:

After seeing it, I was determined to try to find a better image.  Searching for Izra St George brought up quite a few images of the church, such as this: 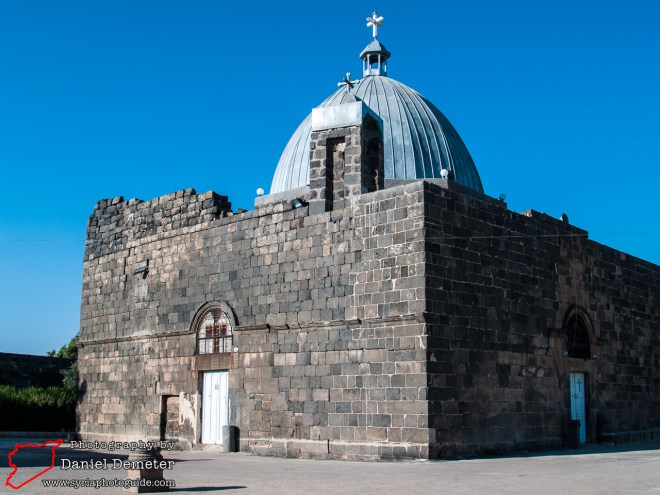 The Wikipedia article for Izra has another.  It also had a link to Google maps, showing a reddish sand desert in which the modern town stands.

It shows the importance of uploading high resolution images.  The author of the inscription photo above had no intention of photographing it.  But his image of the west door of the church was of sufficiently high resolution that I was able to excerpt that picture above.  Marvellous!