The ancient city of Norwich in East Anglia is still surrounded by much of its medieval circuit of walls.  But the gatehouses are all gone.  They were thrown down in an outbreak of civic improvement in 1792, to improve access to the city and save money on repairs.  By that time they were all rather cracked and ruinous anyway.

One of the most impressive was St Stephen’s gate, which faced west.  Queen Elizabeth I entered the city through it, and it must always have been the main city gate.

Here is a drawing of the gate, outside and inside, made around 1720 by John Kirkpatrick and engraved in 1864 by Henry Ninham.[1]. 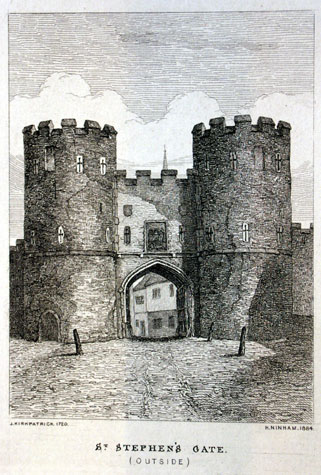 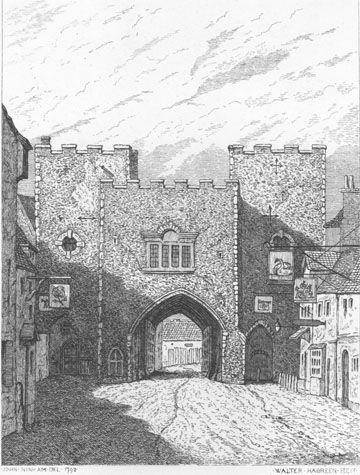 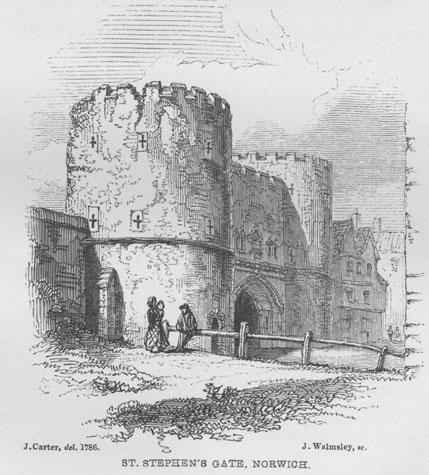 Here is a last one, this time from 1792, just before demolition, by John Ninham, published by Fitch in a volume of such drawings in 1861.[3]  Repairs are clearly visible.  The windows have been enlarged also. 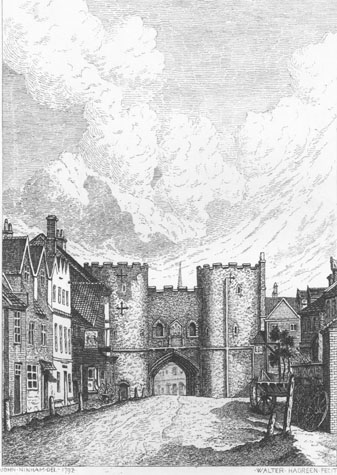 In England local councils vary greatly in their attitude to heritage.  Fortunately Norwich City Council has a splendid website, and this, remarkably, has a survey of the city walls, completed in 1999-2002, plus a page full of hard information for each of the vanished gatehouses.  Here is the one for St Stephen’s Gate.

After the demolition, the area simply became an area of roadway.  Indeed in the 1960s – that era of brutal contempt for what ordinary people felt – some of the walls were demolished to make way for the ring road.  The area of St Stephen’s gate was turned into a hideous roundabout, complete with concrete underpasses, and the foundations are supposed to have been destroyed.  The roundabout is what greets visitors from London and the west today.

But there is more.  The firm of architects that completed the survey was Purcell Miller Tritton, and they did not leave the matter there.  On 22 October 2010 an article appeared in the Eastern Daily Press, calling for the gate house to be rebuilt![4]

An ambitious plan to rebuild the colossal St Stephen’s Gate entrance to the city of Norwich in its original location has been unveiled today. The proposal is to reconstruct the three-storey building using traditional materials such as flint and lime mortar on the St Stephen’s roundabout as part of a wider plan to rejuvenate the city walls and make them more accessible to visitors. 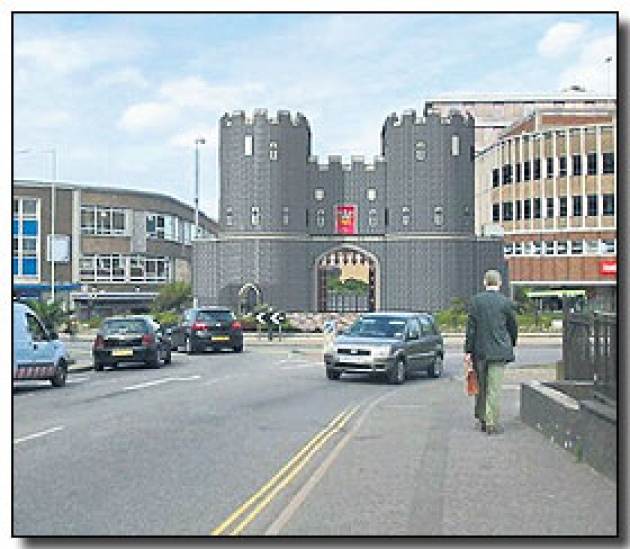 An ambitious plan to rebuild the colossal St Stephen’s Gate entrance to the city of Norwich in its original location has been unveiled today.

The proposal is to reconstruct the three-storey building using traditional materials such as flint and lime mortar on the St Stephen’s roundabout as part of a wider plan to rejuvenate the city walls and make them more accessible to visitors.

A feasibility study has been carried out and work is now beginning on liaising with relevant authorities over the plan and efforts to secure funding for the project.

Norwich Heritage Economic and Regeneration Trust (Heart) came up with the idea and engaged architects Purcell Miller Tritton to look at the state of the city walls and draw up a plan for reconstructing what was the main gate into the medieval city of Norwich.

But they stress that rebuilding the gate is only one part of a larger project to raise awareness of the city walls and bring them back to life.

PMT in Norwich carried out a detailed study of the city defences, about what remained, how accessible they were and how they could be developed as an attraction with Heart providing funding via the East of England Development Agency.

PMT principal Nigel Sunter said: “Our overall conclusion is that the city walls are under-appreciated, difficult to find and in some cases difficult to access, particularly for wheelchair users or someone who is infirm.”

Medieval Norwich was enclosed by a masonry wall between 1337 and 1344 by Richard Spyke, a leading citizen, who carried out the fortification with gates, walls and towers at his own expense.

They are unique in Britain in that they are on both sides of the river and have four gates north of the River Wensum and seven to the south, with towers in between.

But over the years, they have been allowed to deteriorate, particularly during the 20th century. Old photographs from the 1930s show much more of them than survive now and in the 1960s some stretches were even demolished to make way for the ring road.

Mr Sunter said: “The Norwich walls are amongst the longest in the country and there are also some interesting elements to them. One is the unique boom towers from which there were chains across the river to prevent traffic from going upriver.”

Much of what exists of the walls is in a dilapidated state and in some areas the route of them is marked out on the ground such as at the Grapes Hill roundabout.

“There is no interpretation along the length of the walls and I think that we can make a lot more of the walls. Some may need repair, some are overgrown in places, such as the part near St Stephen’s roundabout. But a lot of it is undervalued and underplayed,” said Mr Sunter.

Mr Sunter points out that the story of Norwich is told in the Castle Museum; its ecclesiastical history can be recalled in the cathedral; the Guildhall may one day be the focus of its legal history; and the social side of the city is re-told in museums such as Bridewell.

“But the walls are left out of all those stories,” he said.

The plan includes strengthening the St Stephen’s roundabout to take the weight of the reconstructed gate and retaining the underpasses, which would provide access to the attraction.

The original gate had three storeys and two bastion towers. A lift and staircase will run from the underpass into the first tower where there will be displays re-telling the story of the walls. A further storey will have a roof terrace offering views along St Stephen’s.

Mr Sunter said: “It is only when you rebuild a replica that you understand more about a building, not just what it looked like but what is smelled like, what it sounded like.”

Anthony Moore, research and development co-ordinator with Heart, said: “Cities such as York and Chester have reconstructed their walls and they are now really an attraction that pump primes the economy. Other European cities such as Krakow have done the same so it is not unprecedented.

“St Stephen’s Gate was the main gate into Norwich, Queen Elizabeth I processed through it, and it has played a large part in the city’s history.”

Heart and PMT recognise there are still significant negotiations to take place over rebuilding St Stephen’s Gate but if all goes to plan, it could be a stunning feature for the centre of Norwich by the end of the decade.

Sadly the proposal does not seem to have been taken up.  The reconstruction, indeed, looks like it was done by a school-leaver in Paint!

Rebuilding like this is something that is incredibly rare in Britain, and there are strong voices in the establishment that oppose anything of the sort.  If a historic building is destroyed, accidentally or deliberately, then there is almost an assumption that it must be forgotten and something hideous built in its place.

But in Germany after WW2 there was widespread rebuilding, especially in Dresden and Nuremberg which were almost destroyed.  The heritage of the past is thereby made available to the present.  Likewise in Rome, when the Constantinian basilica of St Pauls-without-the-walls was destroyed, it was rebuilt as it had been.

We live at the tail end of the 60s era.  Those who gleefully inflicted concrete horrors on every town in the realm are still in power, just about.  Perhaps it will not be possible to make progress until these rotters are in their graves.  But already we see that nobody builds more of those horrors.  Anonymous concrete and glass boxes are still being built; but we can hope for an end to these too.

I think that I am definitely in favour of some rebuilding.  The destruction of ancient and medieval buildings was still going on in the 60s, and would be resisted now.  Let’s hope to see experiments in rebuilding heritage in England too.

I had forgotten to check the online copy of J. Britton, “On ancient gate-houses”.  It is full of interesting remarks.

In 1786, more than sixty years ago, that industrious and enthusiastic antiquary, John Carter, visited Norwich, and found eleven out of the twelve city gate-houses standing. Heigham Gate, he states beneath one of his sketches, had been then destroyed “some years:” having been taken down when Blomefield wrote, in 1741. Of the remaining eleven he made a series of slight but effective sketches, looking from without the gates into the city. He states that these sketches were made on a Sunday when all the gates were closed. These drawings together with all the other sketches that he made, from 1768 to 1806, are now in my possession, and form a collection of authentic representations, including many objects of which no other views exist. They extend through 37 folio volumes. Mr. Stevenson of Norwich possesses drawings made with a camera obscura of the same eleven gates. (p.135-6).

“Blomefield” is “Blomefield’s History”.  It would be very interesting to know where Mr Carter’s volumes are; even more so the Stevenson papers.  A google search suggests that they may be in the archives of Kings College London:

John Carter’s newly catalogued papers and correspondence in the archives of King’s College London throw considerable new light on his relationship with members of the Society of Antiquaries and his patrons, and include previously unpublished sketches of several of them. His memoirs show that a small group of wealthy antiquaries recognized his skills as an accurate and conscientious draughtsman and encouraged him faithfully to record historic – and especially medieval – buildings and monuments. Many of these buildings were later altered or destroyed, and his numerous surviving drawings are thus of immense value to scholars.[5]

I find a page on Carter’s papers at the National Archives here.  This tells me that there are manuscripts transferred to the British Library; and their catalogue tells me of:

In a similar way, “Stevenson” may be William Stevenson, F.S.A., who was proprietor of the Norfolk Chronicle.  I find a mention of “COL/5/19 Papers owned by William Stevenson, relating to the history of Norwich and Norfolk, 1066-1755” in the Norfolk and Norwich Record Office.[6].  Someone ought to track these down.

Likewise the excellent Mr Britton even has something to say about attitudes that give rise to things like brutalist “architecture”:

I cannot help contrasting the state of society, when I visited Norwich more than forty years ago, with its condition at the present time. Then the greatest apathy prevailed on antiquarian subjects; the cathedral was in a lamentable state of dilapidation, and neglect, whilst the repairs that had been made and were in progress were heedlessly and tastelessly executed. Now, on the contrary, its officers are actively and liberally occupied in making sound and substantial repairs and restorations, in accordance with the varied styles and character of the old works.

Perhaps we should just see the last 50 years rather as the Victorians saw the period prior to their own; a period of decay, neglect, corruption and wastefulness?

4 thoughts on “Should we build reproductions of now vanished buildings?”