At Easter every year the web witnesses an upsurge of smug howling of idiotic anti-Christian nonsense, about Easter, Ishtar, the Easter Bunny and heaven knows what.  Most of us ignore it for the rubbish it is.

A couple of months ago I came across some extremely capable responses to this from a certain Adrian Bott, who blogs at cavalorn.livejournal.com and tweets as @cavalorn.  Paradoxically his thoughts are captured far better in the series of tweets than in his blog posts, or his article at the Guardian.  I believe that he posts something on this every year; so let’s help a bit, by adding this to the Google search results.

His first Twitter thread concerned how we know that Easter was not a hijacked pagan festival. (Twitter link).

“Let’s start with the basics. How do we know Easter was not a hijacked pagan festival? Paradoxically, we can do this by trying to prove that it *was.*”

Now, we know there was no one people known as ‘the pagans’. There was, rather, an abundance of non-Christian polytheistic belief systems, differing from region to region. The Anglo-Saxon pagans, for example, would not have worshipped the same Gods as the ancient Irish pagans.

So the first question is, if Easter is a stolen pagan festival, then which specific pagans was it stolen from? Going by the name – Easter, allegedly derived from the Anglo-Saxon goddess Eostre – the only possible candidate is the Anglo-Saxons.

Logically, then, the earliest possible date on which Easter can have been stolen from the pagans is 596, since that was the date on which the first Christian missionaries began to convert the Anglo-Saxons. See Bede’s Ecclesiastical History of the English People, written in 791 CE.

And that’s where our theory falls apart; because Easter was already being celebrated long before 596, under its original name of Pesach. In fact, Easter had been celebrated since the 2nd Century. (See Melito of Sardis, Homily on the Pascha.)

In fact, Pascha was already so well established by the time the missionaries arrived in pagan England that the chief missionary, Augustine, had a major spat with the neighbouring ‘Celtic’ Church about the proper date to celebrate it on. (Also Bede.)

Okay, so why do we call it Easter? That was the name of a Goddess, right? Surely that’s evidence that the Church nicked the name of an existing festival in order to make conversion easier?

Granted, we have documentary evidence that Gregory the Great (who sent the missionaries to England) did indeed recommend a policy of acculturation – but he did *not* recommend the adoption of pagan festivals, and as we’ve seen, Pesach was already long established.

Gregory recommends that well-built pagan temples should be repurposed for Christian use, & converts should be allowed to keep on slaughtering and eating animals on sacred occasions, just not as a sacrifice. But both these things were governed by the existing Christian calendar.

Furthermore, mere missionaries simply did not have the authority to add new festivals to the Church calendar. Regardless of how helpful they might have found it to hijack the feast day of Garthog the Colossally Endowed and rebrand it as Twinklemas, they were not allowed to.

And the Pope did not add a new festival to the Church calendar without adding it for the ENTIRE Church. So why should Christians in, say, Rome have a new festival added for the sake of the new converts in Kent?

Here’s the reason why we English call Pascha ‘Easter’. According to Bede, the Anglo-Saxons DID have a festival called Eostur in honour of the Goddess Eostre. It happened in the fourth lunar month of the year.

So the Anglo-Saxons are accustomed to getting together on the full moon of the fourth lunar month for a major festival that they call Eostur. It’s a feast over multiple days; a very big deal to them.

Now, the Christian celebration of Pascha is also linked to the full moon, according to a system of calculation that comes down via an entirely different route, and has its roots in Passover. (The old Hebrew calendar used lunar months, too.)

So the English converts call Pascha ‘Eostur’ through sheer force of habit. It’s ‘the big get-together on the fourth full moon of the year, when we do some religion then eat lots of roast ox.’ (The English are still eating roast meat on Easter to this day; quite pagan of us.)

But why would the English people call a Christian festival by a different name to that which their priests called it? Well, the official language of the Church was Latin, and we spoke Old English. So it makes sense that we’d go on using our old familiar name.

Not everyone in Britain did call Pascha ‘Easter’, of course. In some places it was called ‘Pace’, a much more obvious derivation of Pascha. Hence ‘pace-egging’. So no, Easter wasn’t ‘hijacked’. We English are just creatures of habit. End of thread. Thankyouverymudge.

This, I think we can all agree, expresses concisely exactly what most people need to hear.

His next thread deals with the supposed symbolism of the Easter Bunny. (Twitter link)

The Easter Bunny does not symbolise a damn thing. None of the egg-bringing animals of legend are in any way ‘symbolic’ any more than the Tooth Fairy is. Not symbolic of ‘fertility’ nor of anything else.

But there is a reason why people are now conditioned to read ‘symbolism’ into things like the Easter Bunny, and it’s worth saying a few words about that reason, because there is an asston of class privilege and erasure involved.

Back in the last century, there was a mania for writing oh-so-learned interpretations of folk customs. It was a superb racket to be in, because the basic premise was that the original meaning of the customs had long been forgotten.

So you, the scholarly researcher, could make up – sorry, cleverly deduce – whatever ‘symbolism’ you liked, and there were no ancient pagans around to tell you you were wrong. Of course, if the silly commoners who actually PRACTICED the customs told you you were wrong…

… then you could condescendingly put them in their place. This actually happened. See Hutton’s ‘Triumph of the Moon’.

If you answered ‘pagan survivals’ and ‘fertility’ then congratulations. Have a bun.

So there you go. The reason we are currently drowning in this ‘omg it’s all symbolic of pagan fertility’ stuff is that a bunch of arrogant, well-intentioned, scholarly, superior bods not only believed they knew better than the regular people, but said so again and again.

If you want a good way of deconstructing this stuff and showing just how daft it all is, try reading ‘symbolic meanings’ into any everyday phenomenon. It’s easy to do and yields convincing results.

Here’s Ron Hutton again, from ‘Triumph of the Moon’, which anyone interested in this stuff ought to read. 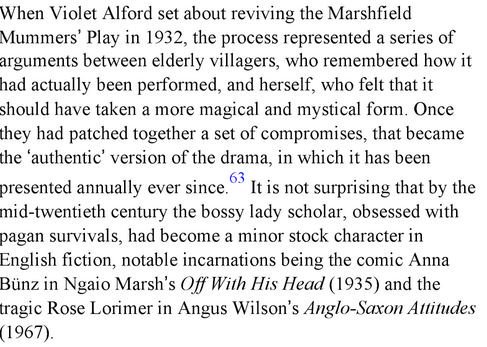 In 1937, the very learned S L Hooke delivered a presidential address to the Folk-Lore Society in which he proposed that football matches on Shrove Tuesday were actually descended from a ritual combat between the forces of light and darkness.

That is the background to all these ‘Easter was pagan because symbolism!!’ assertions. It’s like a farce. But people eagerly swallowed it and we are collectively still feeling the effects to this day.

(Heckler) So why is there an Easter bunny?

Because parents didn’t want children to know who was really responsible for leaving the decorated eggs for them to find.

Why a bunny? Well, it was originally a hare, probably because hares leave nest-like forms in fields.  https://www.dailygrail.com/2016/03/hares-eggs-for-easter/

Finally Adrian address the question: “why do we care?” (Twitter link)

Here are several reasons why I think it’s important to counter the ‘Easter was pagan’ rubbish with properly sourced & attributed facts. 1. Bogus history obscures real history, and the real history is not just rich and interesting, it tells us who we are and how we got here.

2. The ‘pagan Easter’ tropes diminish, deny or outright ignore the influence of Passover on Easter, and that’s been held up as anti-Semitic.

3. Much of the misunderstanding of Easter’s actual lore and history comes from assuming the English name for the festival – Easter – defines the whole event. That’s an absurd degree of Anglocentrism.

4. The bogus Ishtar/Easter connection was originally made in the context of an anti-Catholic rant (The Two Babylons). So there’s anti-Catholicism baked into the whole ‘Easter was pagan’ argument too.

5. Claiming Easter is all about indigenous Anglo-Saxon (thus Germanic) deities is characteristic of certain strains of hard right-wing thought.

6. The myth of pagan Easter is used in some fundamentalist Christian circles to discourage believers from celebrating it.

7. The insistence that ‘the Church hijacked pagan festivals to make it easier to convert and oppress the population’ paints a ludicrously unbalanced and ill-informed picture of how the early Church worked.

The ‘Easter was pagan’ myth manages to be anti-Semitic, anti-Catholic, anti-Christian and anti-pagan (because it peddles a false version of pagan belief) which is quite an achievement, really.

Which speaks for itself.

Thank you Adrian for trying to stem the flow of crud every Easter.

One thought on “Debunking idiotic myths about Easter. No, it isn’t pagan. No the Easter bunny doesn’t signify anything”