Update: I misread the announcement of Vat.lat.3394 that it contained the Notitia Dignitatum.  It does not.  Post amended!

A few years ago I uploaded the Chronography of 354 AD to the web, and I included some of the regionary catalogues here as part 14, with notes by me; the lists of buildings, temples, etc in the 14 regions of ancient Rome.

Times have changed, and I learn from the Vatican digitisation project twitter feed that one of the manuscripts of a regionary catalogue has come online, ms. Vat. lat. 3394, late 15th c., belong to Pomponio Leto.  It’s here.  It’s a dull-looking manuscript, but full of hard data!  Here’s the start of region V. 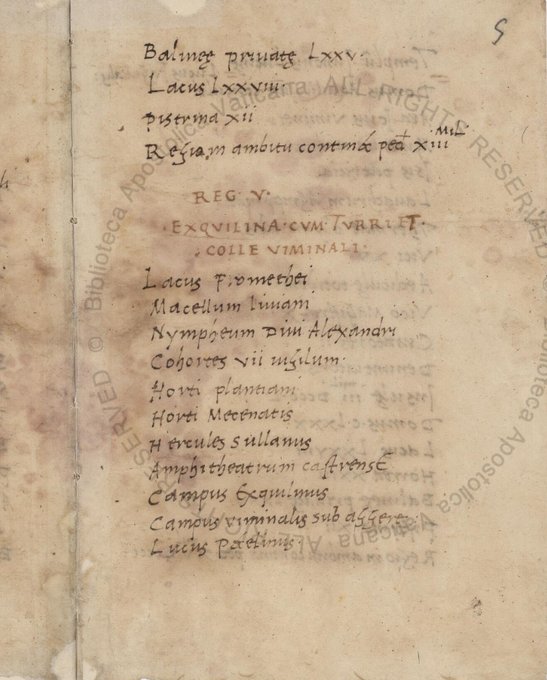 But this is not all.

We also now have online here the Bodleian’s copy of the Notitia Dignitatum too, which contains lists of military posts.

The manuscript is a “collection of texts on the late Roman Empire, many of which have been illustrated”.  I could wish that it was easier to find out just what the contents actually are!  The browser is as useless as usual, or I might flip through it.  In the end I found a list here.  It includes Polemius Silvius’ calendar, De Rebus Bellicis, Altercatio Hadriani Augusti et Epicteti philosophi, Notitia urbis Constantinopolitanae, and regionary stuff. All useful and interesting to have!