There are perils to late-night writing, one of which is that you may not be that sharp!  But today I have started to look at Traversari’s translation of Ephraem Graecus’ Beatitudines aliae capita xx.  Here’s the first “chapter” (with ocr error corrected!):

1. Blessed [is he], who hates and abandons this present life, and in God alone is the meditation of his life.

Somewhat odd phrasing, so let’s look at the Greek, taken from the Phrantzolas edition:

I’m quite sure that Ambrogio Traversari knew vastly more Greek back in the 15th century than I know now.  But all the same… this is not a good translation.  Getting the verb tenses right is important.  It’s poetic, much the same meaning, but not good.

At this point, I am curious to know how the sentence was rendered by the late antique translator who created a Latin version of Beatitudines aliae capita xx.  Fortunately this was printed, albeit in a horrid and  hideously abbreviated incunable: 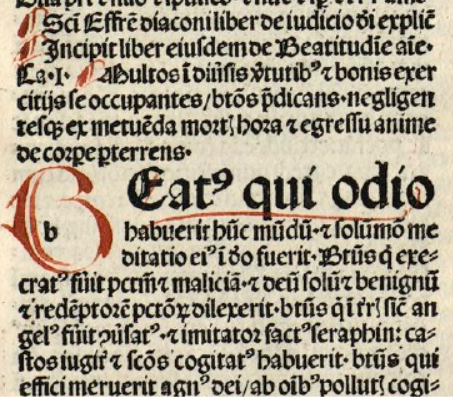 I.e. Blessed is he who held this world in contempt, and alone his meditation was in God.

Better tense rendering, anyway, although not very close to the original.  But how interesting the use of the word “meditatio” in both cases.

At this point I consult Souter’s Glossary of Later Latin which includes uses for meditatio such as “thinking”, “study” and “carrying out”.  All the same; neither is that close to the Greek.

UPDATE: Please see the comments for corrections of my mistakes.  In particular, I should have looked at Lampe’s Lexicon of Patristic Greek for μελέτη!