Little is known about the satirist Juvenal, other than what can be gleaned from his works. There are ancient scholia, but these are plainly the product of Late Antiquity.

Reading the old 1913 Loeb edition of Juvenal, my eye was drawn to mention of an ancient biography of Juvenal, of dubious veracity.  The editor gave the Latin text of it, in the preface, but strangely not an English translation:

I found this 1857 translation online, by Maclaine:

Junius Juvenalis, the son or the alumnus (it is uncertain which) of a rich freedman, practised declamation till near middle life, more for amusement than by way of preparing himself for school or forum. Afterwards, having written a clever satire of a few verses on Paris the pantomimus, and a poet of his, who was puffed up with his paltry six months’ military rank, he took pains to perfect himself in this kind of writing. And yet for a very long time he did not venture to trust any thing even to a small audience. But after a while he was heard by great crowds, and with great success, several times: so that he was led to insert in his new writings those verses which he had written first:

What our great men won’t give you, the actor will.  Why
frequent the high antechambers of the Camerini and Bareae?
It is the Pelopea that appoints our Prefects, and the Philomela our Tribunes. (vii. 90-92)[3]

The player was at that time one of the favourites at court, and many of his supporters were daily promoted. Juvenal, therefore, fell under suspicion as one who had covertly censured the times; and forthwith under colour of military promotion, though he was eighty years of age, he was removed from the city, and sent to be praefectus of a cohort on its way to the farthest part of Egypt. That sort of punishment was determined upon as being suited to a light and jocular offence. Within a very short time he died of vexation and disgust.”[4]

(D.) Junius Juvenalis, the son or adopted son (this is not established) of a rich freedman, was a declaimer until about middle age, more as a hobby than because he was preparing himself for a career as a professional declaimer or barrister. Then he composed a satire of a few verses, quite wittily, against the pantomime dancer Paris and his librettist, who was vain because of trivial six-month military appointments, and proceeded to devote himself to this style of writing. Yet for a long time he did not venture to entrust anything even to quite a small audience. Subsequently he gave readings a few times to packed audiences with such success that he inserted into his later writings his first composition also [then 7.90–2 are quoted]. At that time there was an actor who was a court favourite, and many of his fans were being promoted daily. Therefore Juvenal came under suspicion of making indirect attacks on the times, and, although in his eighties, he was removed from Rome by a military appointment and sent to take command of a cohort on its way to the remotest part of Egypt. This kind of punishment was decided upon so that it might match his trivial and humorous offence. However within a very short time he died because of vexation and disgust.

The remarks in the Loeb about this little text are frustratingly vague.  Maclaine also is vague, but he tells us a little more, which I will summarise.

There are, it seems, a number of these biographies, attached to various manuscripts, and he dismisses the lot.  He continues:

Another of these notices states that Juvenal was born at Aquinum, in the reign of Claudius; that he returned from exile, survived the reign of Trajan, and finally died of old age in a fit of coughing.

In a third we are told that when he returned to Rome, finding his friend Martial was dead, he died of grief in his eighty-first year.

A fourth says it was Domitian who exiled him; that he never returned, but that after correcting and adding to hi. Satires in Egypt, he died there of old age in the reign of Antoninus Pius.

From a fifth we learn that he was advanced to the equestrian rank through his own merit; that the place of his honourable exile was Scotland, and that the motive was that he might be killed in battle; that the emperor in a despatch addressed to him with the army, wrote these words, “et te Philomela promovit ” (alluding to his own epigram), and that, learning from this the anger of the emperor, he died of a broken heart.

The sixth memoir makes Trajan the emperor, Paris being still the hero of the epigram, and agrees with the fifth about Scotland.

A seventh agrees substantially with the first, except that the emperor is said to have been Nero.

These seven are published at the end of Jahn’s edition.

Jahn’s 1851 edition does indeed contain this material, together with the ancient scholia.[5]  It tells us that this first biography was edited by Lorenzo Valla, no less, as by “Probus”, and that it appears at the end of codex “P”, the Pithoeanus, now Ms. Montpellier 125 (9th c.), in a “more recent hand”; plus three other manuscripts from the 10th-13th centuries.

The other six biographies seem to be taken from a range of individual manuscripts, described vaguely, which we may guess to be late, and mostly at second-hand.

It’s good to have this material, but Jahn is now an exceedingly long time ago.  A. E. Housman’s 1905 edition is online here, with its mighty and often amusing preface, which I first read reprinted among that great poet and author’s literary works.  But he does not print the scholia or the vitae.

Fortunately I was able to locate a bibliography online in preview, from which I learn that the standard edition of the scholia today is that of W. V. Clausen, A. Persi Flacci et D. Iuni Iuuenalis satura, Oxford, 1992. This includes the ancient biography, and another short one as the first scholion.  The new Loeb is even more recent.  Some of what Jahn prints does not seem to be in either.

Update Jan 2021: The Scholia have recently been re-edited by S. Grazzini and published in 2 volumes in Pisa.  Manuscripts of the ancient biography are also coming online.  It appears on folio 1r of British Library Additional 15600, of the 9th century, online here. 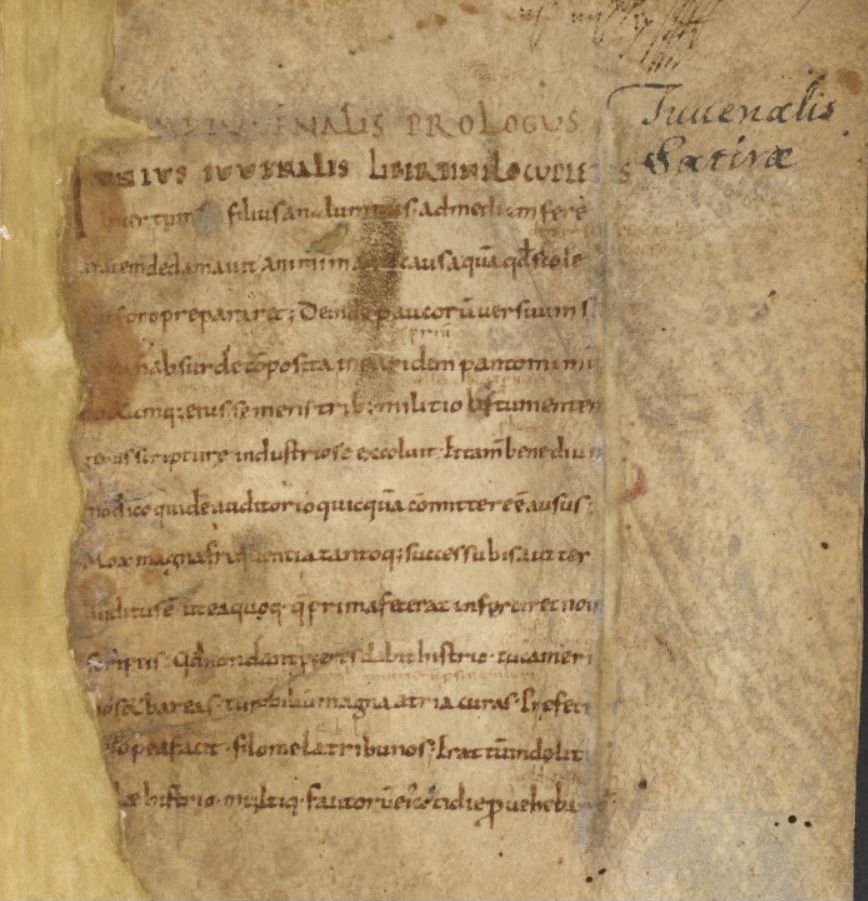 In addition the Montpellier H25 (Pithoeanus) is also online here: 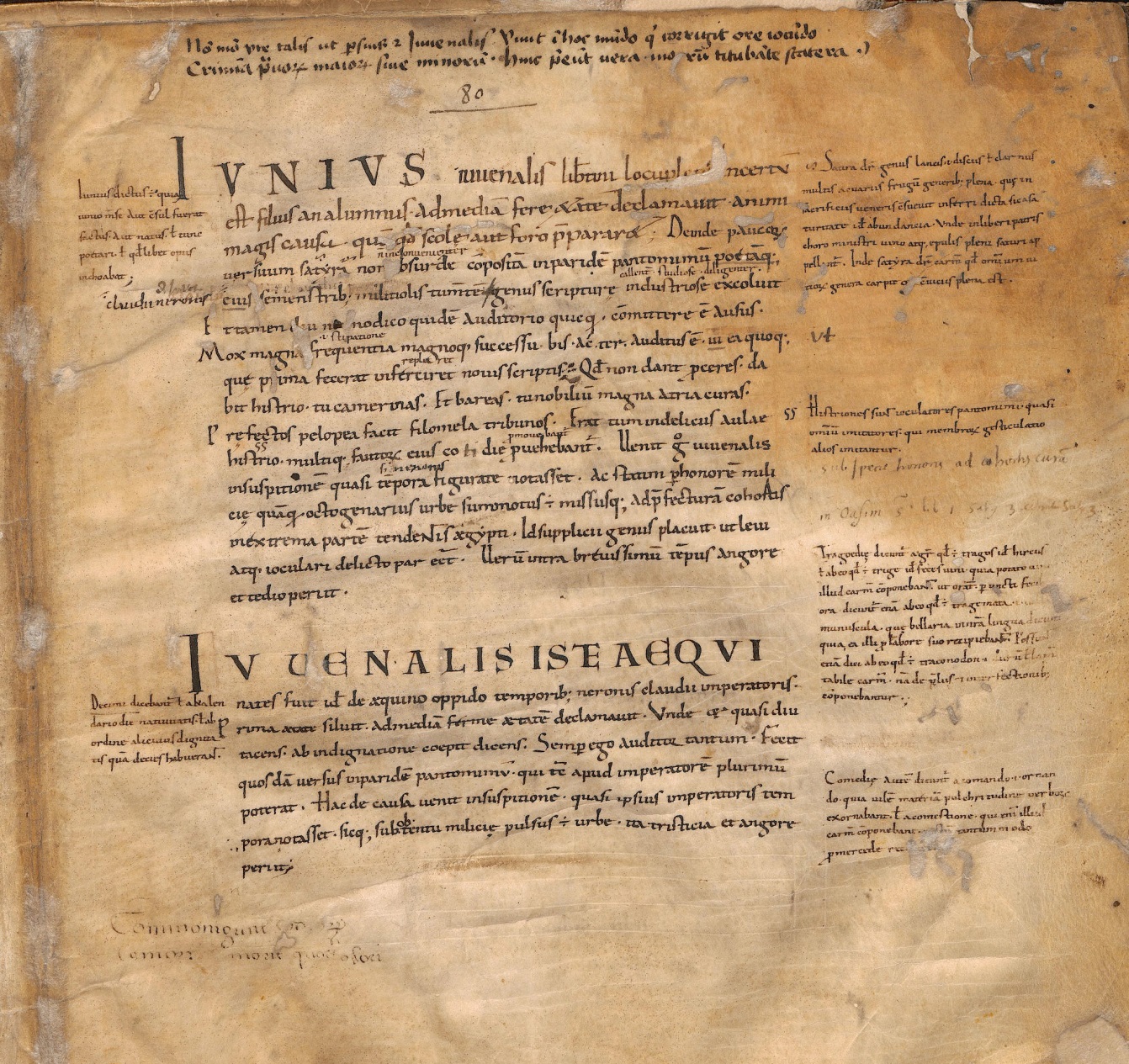 Very nice to see these!

6 thoughts on “An ancient life of Juvenal”