When I was 11 years old, I was transferred to an old-fashioned northern grammar school.  This kept up the tradition of Latin and Greek, and Latin began at 11, and continued until 16.

I remember the Latin classes well.  It was a devil to learn, but useful to know, and I was fortunate to have an excellent teacher. 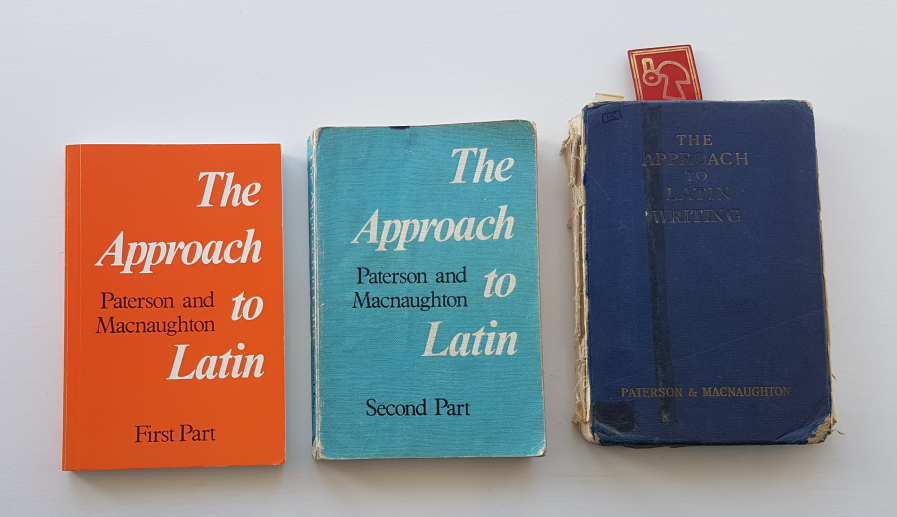 Schoolboys are hard on books.  At some time in my later years there, the school disposed of unwanted copies of the last two volumes, to anyone who would take them away. I picked up the latter two, and they lived in an old briefcase in my loft for many years until I brought them down a decade ago and shelved them with my Latin books.

There was no opportunity to collect a copy of the first volume – the only one I ever used.  But I was able to purchase a reprint in Cambridge in the late 1990s, from Heffers Bookshop, for £9.90.

These little books must have been printed in tens of thousands, but how many remain today?  Searching for copies online on Amazon and Abebooks, I was shocked to find that all these books are now sold for princely prices.  One copy was offered at over $1500 today, which is ridiculous.

I looked inside them last night, and took Second Part to bed with me, to read through the slender sections on Latin syntactical constructions.

The introduction states that they contain “a selected minimum of grammar”, and this is very true.  The vast bulk of the book consists of exercises.  Each bit of grammar, often half a page, is followed by two or three pages of exercises.  This is, of course, frustrating if you want hard information.

The actual grammatical content is very concise.  This morning I was reading a chunk of the Writing book, explaining something, and I wondered if there was a misprint!  I had to reread it two or three times before I could work out what they meant.  That the book was meant to be taught by a human teacher was evident.

I do not believe that my schoolboy self could have decrypted that sentence.  In this sense, it is not a good teaching book.  I know that my old teacher preferred Coles, Latin Grammar Simplified.

The exercises from The Approach to Latin I remember well.  They started easy and became harder and harder.  I loathed translating English into Latin.  But in fact, it is clear that the authors’ intention was to prepare boys to translate from English into Latin, doubtless for examination purposes.  This appears clearly from the grammatical material, now I look at it.

The limited syntactical material is not well presented.  But it caused me to think that I could extend the functionality of QuickLatin, my morphologiser, to flash up some possibilities whenever you see the word “ut” or “sicut”, or find a gerundive.  It wouldn’t be hard to do that.  At least, it shouldn’t be.

QuickLatin was originally written in 1999, during a long and pointless government contract.  It was written in Visual Basic 6, that much missed and easy to use tool that Microsoft sold at that time.  From time to time I have tried to rewrite it in something newer; but always I have had to stop, and go and earn a living.

Microsoft have never troubled to maintain their own tools, or to guarantee backward compatibility.  VB6 was phased out in favour of the incompatible VB.Net, almost twenty years ago.  VB.Net is now being phased out, with nothing to replace it.  I did attempt a rewrite in Microsoft Visual C/C++, and got so far.  When I came to pick up the project, a couple of years later, it wouldn’t even compile in the newer version of the tool.

Of course 1999 was aeons ago, by modern software practices.  Today everything is done with Test-Driven Development (although Microsoft never liked it, and their support for it in .NET was always rubbish).  Everything is divided into classes and objects.  VB6 stuff predates that.  It was always hard to work with.

Anyway, I’m stuck with VB6 code.  You can’t even convert it to VB.NET, incredibly.  Thus I’ve not put out a new version of QuickLatin in years.  But VB6 continued to work on Windows 7, as I recall.  I still have the disks for VB6.

It is apparently possible to install this on Windows 10.  But … for me at least … it has not worked.

This is why computers are frustrating.  You decide to do something and then, little by little, get led softly away from that into a Byzantine series of other tasks.

The task I want to do is translate some Latin.  To do this, I need to know more syntax.  To help with this, I’d like to modify QuickLatin.  To do that, I need to install VB6.  To do that… I need to find workarounds.  Maybe install a virtual XP machine.  Which means… yet more stuff to do.  All of which take time and prevent me doing what I actually wanted to do!

And so another day disappears.

4 thoughts on “From my diary”