A few days ago a kind correspondent sent me details of the tomb of Aelia Arisuth, 8km west of Tripoli in Libya, which I have added to my digest of Mithras photographs.  It’s listed in the CIMRM as CIMRM 113.  The tomb contains two tomb niches, one for Aelia Arisuth herself, and one for her husband, Aelius Magnus, son of Juratanus.  General results from Google attribute the tomb to the 4th century AD.

The niche for Aelia Arisuth herself includes a painting of the lady, and spectacular decoration:

The presence of two torch-bearers raised a question as to whether this was a Mithraic monument.  The tomb of Aelius Magnus includes the inscription “qui leo iacet”, and his wife “quae lea iacet”, both referring to “lion”, a grade of Mithraic initiate.  All the same there is nothing specifically Mithraic about this.

Sadly the revolution in Libya has damaged the monument.  The left torchbearer had a head before Col. Gadaffi was overthrown, as we can see in this older photograph:

There are few photographs online.  I’ve not been there myself, although I visited Libya twice under the old regime as a tourist, so it was clearly not on the tourist trail, such as it was.

The lower register depicts two spinae, the columns at the end of a race-track, and chariots in between.

I was able to find a zoomed in picture of Aelia Arisuth herself, which must have been taken from life. 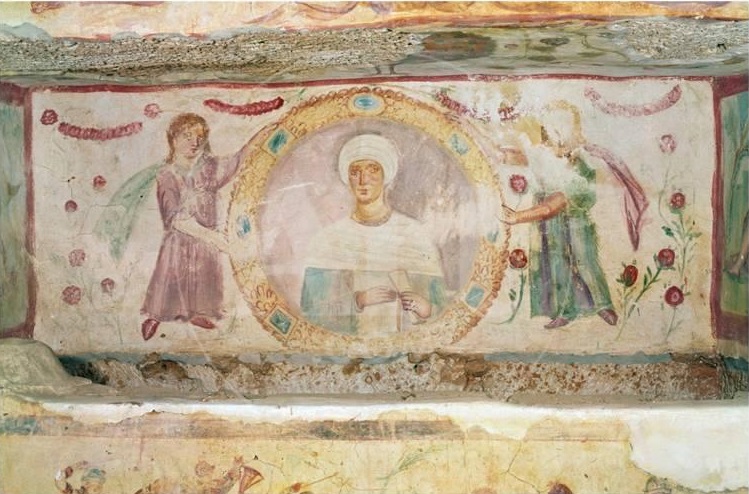 2 thoughts on “The tomb of Aelia Arisuth in Libya”