A twitter post drew my attention to an interesting item held in the British Museum since 1899.  Their catalogue page is here.  It is described as a “silver votive plaque with a figure of the god Mithras”.  Here are the pictures:

And a zoomed in version: 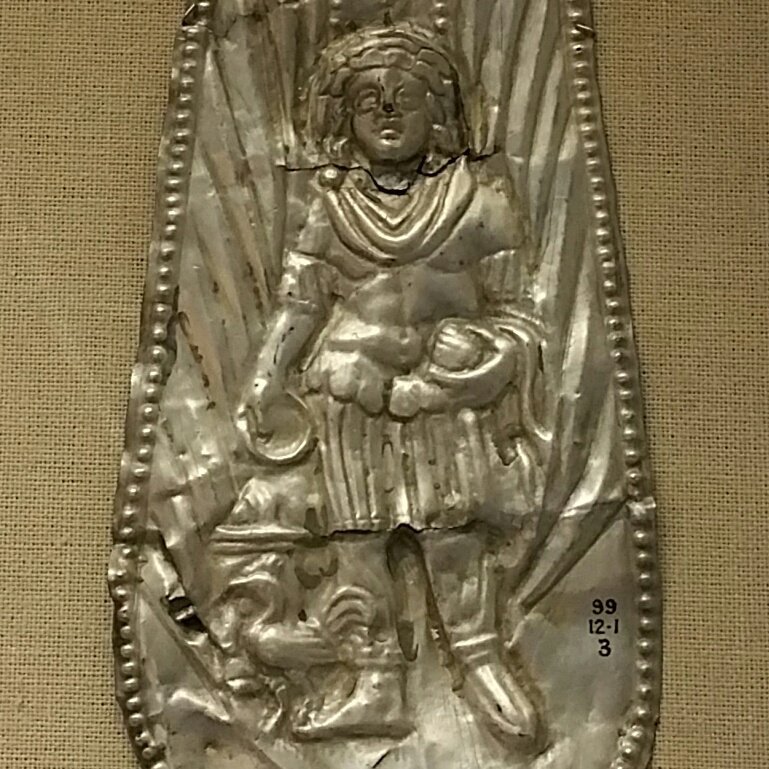 Viewed up close, this is not Mithras.  Nothing about him reflects Mithraic iconography.  He is not even wearing a phrygian cap.  To me the figure looks like Attis; but I am unclear what the items that he is holding are – a dish and some sort of ball or fruit?  There seems to be an altar by his right foot, with a bird of some sort moving in front of it.  His stomach appears to be bare, which is definitely part of the iconography of Attis.

The plaque was bequeathed to the museum by Sir Arthur Wollaston Franks  in 1899.

The item is apparently catalogued in “Walters, H B, Catalogue of the Silver Plate (Greek, Etruscan And Roman) in the British Museum, London, BMP, 1921”, according to the excellent British Museum site – easily the best website of its kind known to me – and this turns out to be online at Archive.org here.  The catalogue entry is on p.59, where we read:

229. Tablet, similar. Form as the preceding. On the broad end of the leaf is a figure in relief of Mithras to the front, holding a patera in r. hand and a pine-cone in l. ; he has thick straight hair falling each side of the face, sleeved chiton and another garment over it, chlamys falling over the chest in front and caught up on the l. arm, and high boots. At his r. side is a cock to l., and behind it a small altar on which a fire burns. On the leaf are rows of raised dots.

The preceding two items clarify this description somewhat; they are from the same source, and are also silver votive tablets, showing Sol – definitely -, and what we are told is Luna, although why is not clear.  Both plaques have raised dots along the edge.

But the note to the “Sol” plaque adds the words: “With this were found other votive discs, now melted down.”  Of course these items come from Ottoman Turkey.  One is reminded of the way in which some of the gold found at Troy by Schliemann was stolen, and sold to a goldsmith, who melted them down and made some random Turkish-style jewellery from the metal.  So it looks as if Sir A. W. Franks purchased the items from local peasants who had uncovered them.  Whether they belong together we cannot tell.

I don’t know much about the collector, so I do not know if some travelogue exists somewhere, that explains how he acquired them.  We must just be grateful that he rescued them from the inevitable fate of precious metal in barbarous countries, and that we can look at them today.

4 thoughts on “A silver “votive plaque” of the 2-3rd century AD, attributed to “Mithras””