The majority of ancient depictions of Alexander the Great show a rather effeminate-looking youth.  However there is another portrait which is said to be a Roman copy of a bronze made by Lysippus, Alexander’s personal sculptor.  Three photographs of this, seemingly gathered from the web, were posted on Twitter this morning by @HellenisticPod here.  (Click on each image for a larger size). 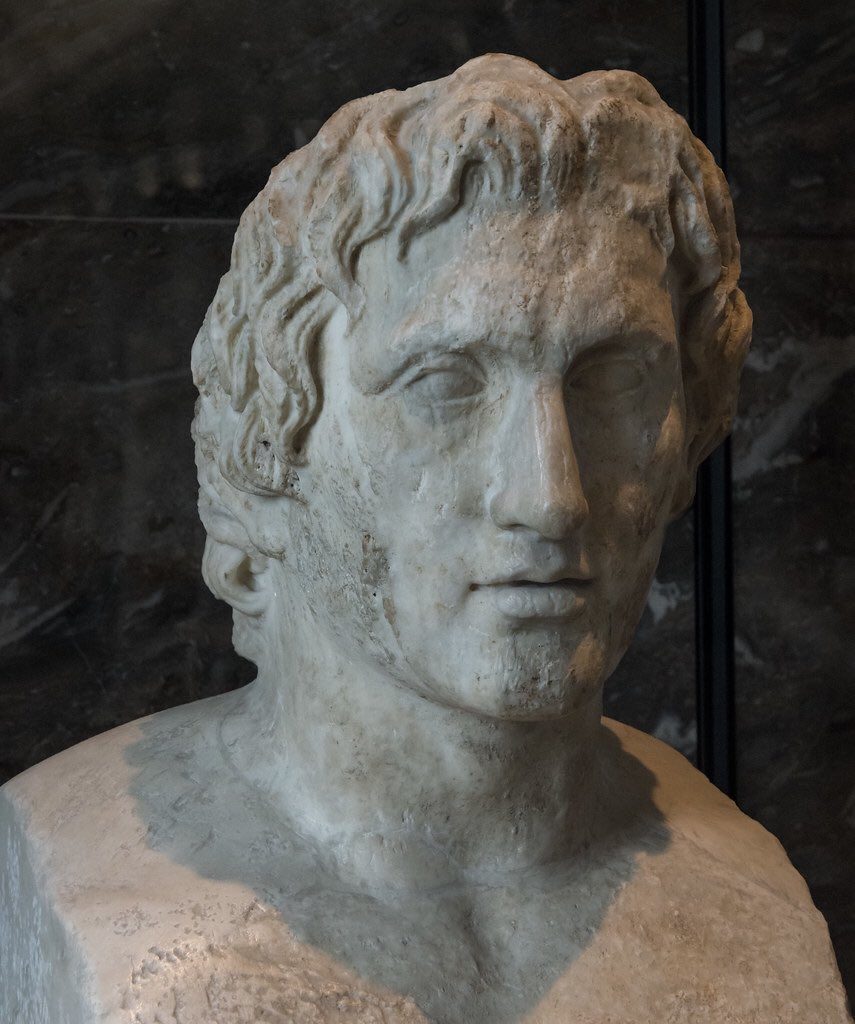 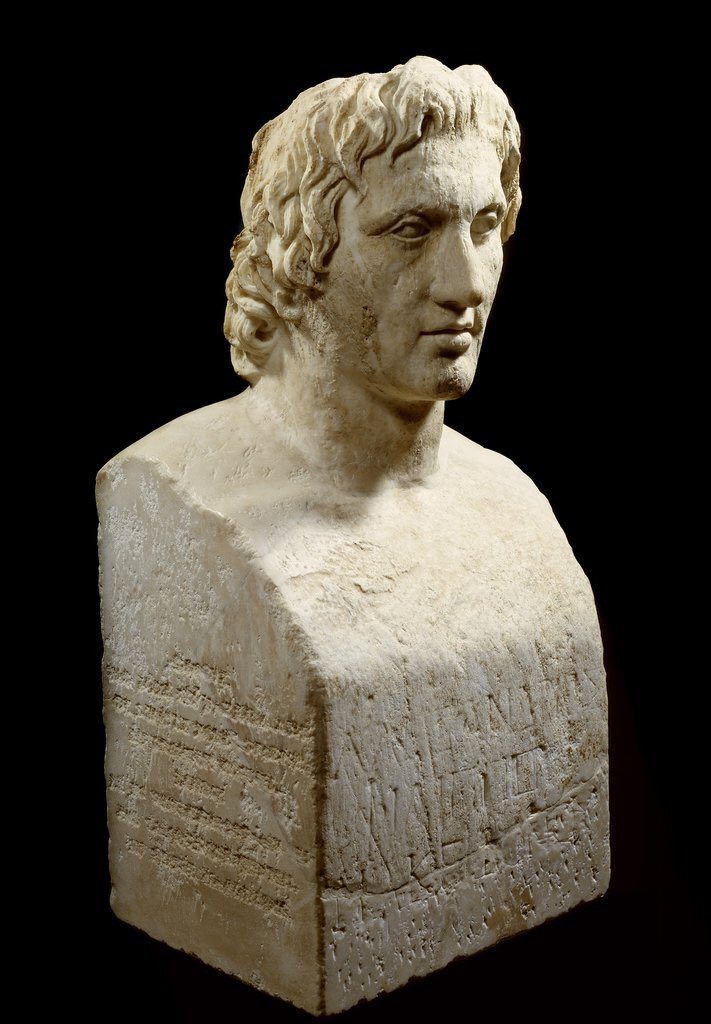 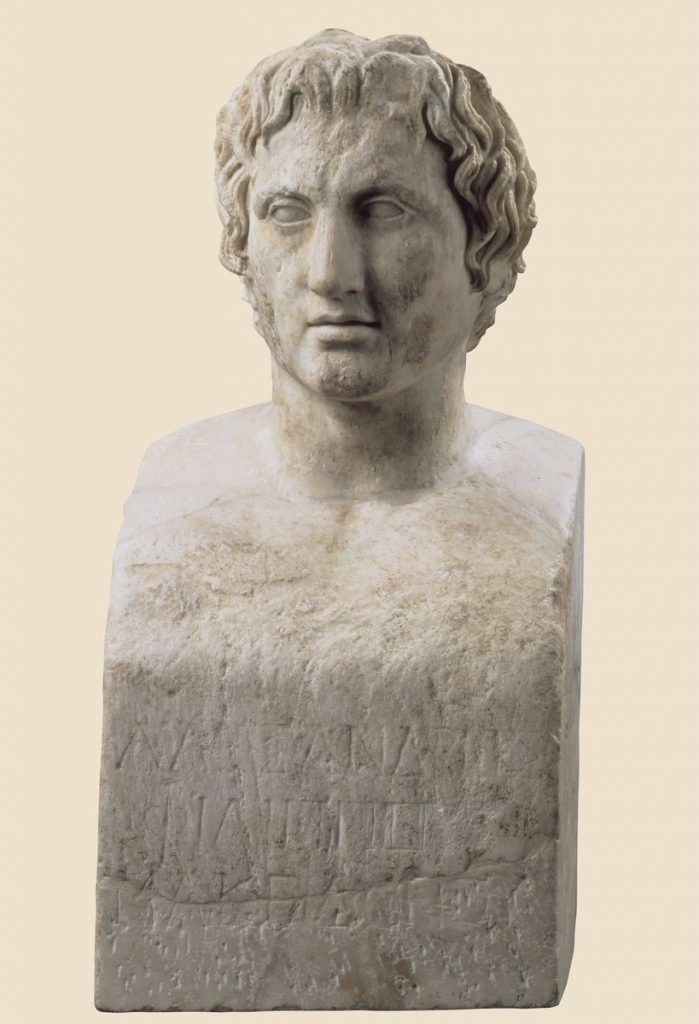 These very stocky depictions make much more sense to modern eyes.  The young Alexander had spent his whole life in military exercise and physical training!

What do we know about this item?

The item is a herm, a pillar ending in the head of a man.  It is held at the Louvre, which has a page on it:

Thanks to its original antique inscription, this figure can be definitely identified as Alexander the Great, son of Philip II of Macedon. The leonine hair brushed up from the forehead is characteristic of portraits of the Macedonian sovereign. The work is a copy of the head of a work from 330 BC attributed to Lysippos – doubtless the statue of Alexander with a bronze lance mentioned by Plutarch (Moralia, 360 D). The Louvre’s small bronze, Br 370, is another copy of the same work.

This bust was part of a gallery of herms featuring portraits of famous men, unearthed in 1779 during an excavation at Tivoli organized by Joseph Nicolas Azara, the Spanish ambassador to the Holy See and, later, to France. For a time, this was the only known portrait of Alexander the Great; the value and significance of Azara’s gift of it to Napoleon Bonaparte was, then, considerable.

This bust was badly damaged during its time underground, and has been extensively restored. It is, nevertheless, the portrait of Alexander that comes closest to the work of Lysippos, a Greek artist of the fourth century BC. Lysippos’s fame is due as much to his works in bronze as to his status as Alexander’s official portraitist. Contemporary sources tell us that the sovereign authorized only three such artists: the sculptor Lysippos, the gem-engraver Pyrgoteles, and the painter Apelles.

No direct trace of Lysippos’s work has come down to us. Most antique bronze statues disappeared long ago, and are known only through small bronze copies or Roman versions in marble. The Azara Herm and the bronze Br 370 are copies of the same original, created by Lysippos around 330 BC.

When we read such statements that a sculpture is a Roman copy of a lost bronze by Lysippus, we must always ask ourselves how this is known.  Is there some statement on the item to justify it?  The article by Michon says:

The negation, however, is here almost like the affirmation, since we know that the portraits of Lysippus, official portraitist of the king, were numerous. But to discuss whether the Azara Herm goes back or does not go back to Lysippus would be to review the entire iconography of Alexander. It would require the reproduction and comparison of a multitude of works and we can not and do not want to attempt this here.

We learn that the nose and both lips are modern restorations.  There has been question as to whether the rather damaged inscription “ΑΛΕΧΑΝΔΡΟΣ ΦΙΛΙΠΠΟΥ ΜΑΚΕΔ…” (Alexander, son of Philip, Macedonian) is actually ancient: another of the busts, thought to be Pherecydes, acquired a neat new Greek inscription identifying it as such some time after its discovery.  But Michon considers that it is.  The herm was found by Azara as part of a collection of 17 heads of philosophers and poets, with a complete statue thought to be of Britannicus but actually a young Bacchus.  It bears the modern inscription “ALEX M SIGNVM IN TIBURTINO PISONVM EFFOSVM ANNO M DCC LXXIX IOS. NIC. AZARA REST. C.”

All the same, it would have been nice to have some idea why we should attribute this item to Lysippus!

5 thoughts on “The Lysippus bust of Alexander the Great”