While working on the Life of St George, I came across an unusual word, “magganum”.  Whatever it was, it was being used during the tortures inflicted on the saint.  The dictionaries were really not very helpful!  Gaffiot thought it could mean “wine barrel”, but also pointed me to “maganum” which Du Cange thought meant “war machine”.  Unhappily Arndt’s text of the Life is essentially a transcript of a medieval manuscript, so the spellings cannot be relied on; while a similar Passio was printed by Huber, but Huber didn’t know what the word meant either!

This evening I had a go with Google.  A site called Dicolatin knew of the word, but suggested that it simply meant “wooden barrel”.  Another site seemingly based on LSJ suggested that it meant “a wine-vessel made of wood, Schol. Cruq. ad Hor. C. 1, 9, 8.”

What on earth was that reference, tho?  Luckily the same page expanded this a bit, “Schol. Cruq. u. Acro Hor. carm. 1, 9, 8.”, and a bit of googling revealed the meaning.  This gnomic phrase indicates the scholia from Cruquius on the “carmina” of Horace, book 1, poem 9, line 8.

But who is Cruquius?  And where can I find his scholia?

Cruquius turns out to be an old editor of Horace, who printed an edition in 1578 in Antwerp, reprint 1579.  Cruquius had had access to four manuscripts from a Dutch monastery, all destroyed a decade earlier during the wars of religion.  These contained interesting comments on the text, explaining individual words.  These scholia were ancient, and contained in no other manuscript.  For lack of a better term, the unknown ancient author of the scholia is known as the “Commentator Cruquianus”.  This, then, is what I needed to access.

But where on earth could these scholia be found?

It turns out that there are several sets of ancient scholia on Horace.  There are scholia from the 3rd century AD by Porphyrio;[1] other scholia by pseudo-Acronis.[2]  Any search for “Commentum in Horatium” brings up endless editions of both in Archive.org.  There is also a four volume Scholia in Horatium, by H. J. Botschuyver, Amsterdam 1935-42.  But this was inaccessible to me.

But I was unable to establish if anyone had ever reprinted the scholia from Cruquius.  Nor could I locate his edition in Google Books.

Eventually I had a lucky break: I found a reprint of Cruquius, from 1579.  It’s online here at Google Books. 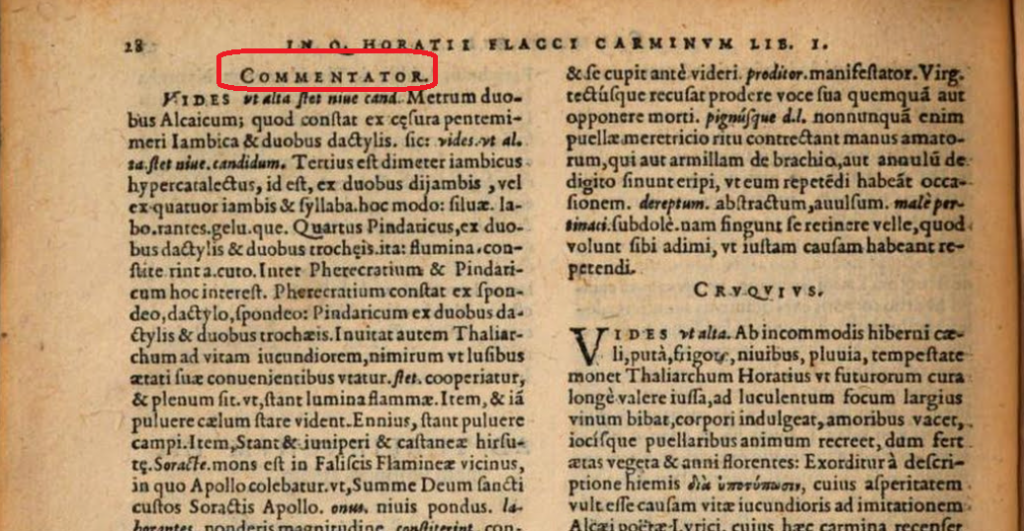 On page 28 is the text of the Commentator Cruquianus on Carmen I.9, line 8.  It reads:

This is an explanation of the word “diota” in the line of Horace: “a vessel is a wine-container having two handles, like two ears, from which it gets its name: otherwise it is what is called “magganum”, a wine-container vessel made out of wood.”

Which is what I was looking for.  Is it the right meaning for St George?  Well, I shall now have to go back and look at the context.  But it was interesting to find these ancient scholia!

UPDATE: The meaning in the Life of St George is in fact “windlass” – see my next post!

6 thoughts on “What does “magganum” mean? Looking for the Commentator Cruquianus of Horace”