The Da Vinci Code has spawned a host of people who believe that the First Council of Nicaea voted on whether Jesus was God.  I tend to correct such people by pointing out that Arius himself calls the Son, “fully God”, in his letter to Eusebius of Nicomedia (321 AD).  I usually include a paragraph from the translation of Henry Bettenson, Documents of the Christian Church, 1947, p.55 (online here), as a particularly clear statement of this: 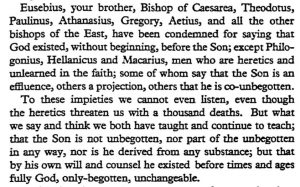 Eusebius, your brother, Bishop of Caesarea, Theodotus, Paulinus, Athanasius, Gregory, Aetius, and all the other bishops of the East, have been condemned for saying that God existed, without beginning, before the Son; except Philogonius, Hellanicus and Macarius, men who are heretics and unlearned in the faith; some of whom say that the Son is an effluence, others a projection, others that he is co-unbegotten.

To these impieties we cannot even listen, even though the heretics threaten us with a thousand deaths. But what we say and think we both have taught and continue to teach; that the Son is not unbegotten, nor part of the unbegotten in any way, nor is he derived from any substance; but that by his own will and counsel he existed before times and ages fully God, only-begotten, unchangeable.

This evening I noticed that not every translation of this letter reads this way.  So I wondered just what the Greek said.

The letter is transmitted to us by Theodoret, Historia Ecclesiastica, book 1, chapter 5 (although in the NPNF version it is mysteriously chapter 4).  The text is edited in the GCS series, and the key passage appears on p.26-27.  In fact the key words are the very first two words on p.27.  And there are no variants!  Here’s the text:

And there it is: πλήρης θεός – pleres theos, fully God.  Pleres indeed can mean complete as well as full, as we see in LSJ.  But the idea is pretty clear.

I did wonder if there was a variant.  After all, everybody knows that Arius did not think that the Son was God in the same way as the Father.  I fully expected to see someone “correct” the text to fix what it said, to  bring it into accordance with the known views of Arius.  But the GCS does not list one.

But Theodoret is not our only source for the letter of Arius.  It is also transmitted by Epiphanius in the Panarion, 69.6.  This also was edited in the GCS series, by Holl.  On p.157 (here) we find the text as follows:

Here Holl is proposing an emendation.  But the text as transmitted is still πλήρης θεός – pleres theos, fully God.

There are also two ancient Latin versions of the letter of Arius.  The first is by Candidus Arianus, which appears among the works of Marius Victorinus.  The other is found in an 8th century manuscript from Cologne Cathedral.  Both of these say “plenus deus”, “fully God”.  (I have written a separate post on these  here).

The letter was also edited by H.-G. Optiz in the Athanasius Werke III/1, as “Urkunden zur Geschichte des arianischen Streites” (= “Documents for the history of the Arian dispute”) 1934, Urk. 1 (= Doc. 1) accessible online here.  Optiz did something a little odd: he simply inserted Holl’s conjecture into the text:

14 And the Word became flesh and dwelt among us, and we have seen his glory, glory as of the only Son from the Father, full of grace and truth. (ESV)

But there seems no pressing reason to introduce this into the text as transmitted.

However the translation at the excellent Fourth Century site here is different: it follows Optiz.

(4.) We are not able to listen to these kinds of impieties, even if the heretics threaten us with ten thousand deaths.  But what do we say and think and what have we previously taught and do we presently teach?  — that the Son is not unbegotten, nor a part of an unbegotten entity in any way, nor from anything in existence, but that he is subsisting in will and intention before time and before the ages, full <of grace and truth,> God, the only-begotten, unchangeable.

The translation is in fact that of R. P. C. Hanson, The Search for the Christian Doctrine of God, 1988, as they make plain.  Hanson page 6: 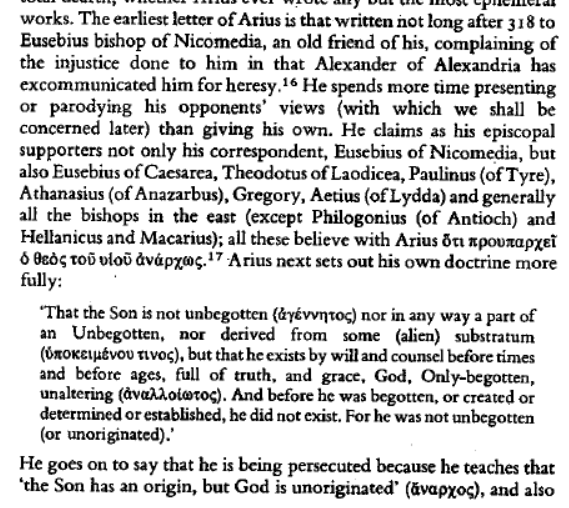 Which is what Optiz give us.

All the same, we have to work with what Theodoret and Epiphanius and the Latin witnesses record, and what Arius wrote.  The old heretic definitely wrote “fully God”.  What he actually meant by this, of course, was the subject of the Arian disputes.  But he did not believe that the Son was not God.

Note: My sincere thanks to A. von Stockhausen for telling me about Epiphanius and the Optiz text in the comments below, with the very useful links.  I have revised this post to include this very valuable information.

8 thoughts on “Arius to Eusebius of Nicomedia: the Son is “fully God””