During a TV interview yesterday, a politician suddenly referred to a 14th century Arabic writer.  Via Twitter:

When asked about his spending plans and plans to cut taxes, Boris Johnson responds “as the great Tunisian scholar and sage Ibn Khaldun pointed out as early as the 14th century, there are plenty of taxes that you can cut which will actually increase your revenues”. 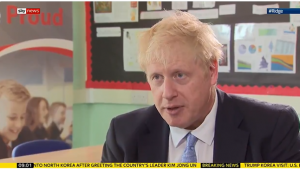 The interviewer was a certain Sophie Ridge on Sky News, and the politician was Boris Johnson, currently hoping to become British Prime Minister.

Naturally my first thought was to wonder whether Ibn Khaldun did say anything like this.

There is an old English translation which is abridged: Abd Ar Rahman bin Muhammed ibn Khaldun: The Muqaddimah, tr. Franz Rosenthal.  In book 1, chapters 36-7, headed read as follows.[1]  A reprint can be found at Amazon US here, or UK: The Muqaddimah: An Introduction to History (Princeton Classics)

36. Taxation and the reason for low and high (tax revenues).

The reason for this is that when the dynasty follows the ways (sunan) of the religion, it imposes only such taxes as are stipulated by the religious law, such as charity taxes, the land tax, and the poll tax. They mean small assessments, because, as everyone knows, the charity tax on property is low. The same applies to the charity tax on grain and cattle, and also to the poll tax, the land tax, and all other taxes required by the religious law. They have fixed limits that cannot be overstepped.

When the dynasty follows the ways of group feeling and (political) superiority, it necessarily has at first a desert attitude, as has been mentioned before.  The desert attitude requires kindness, reverence, humility, respect for the property of other people, and disinclination to appropriate it, except in rare instances.  Therefore, the individual imposts and assessments, which together constitute the tax revenue, are low. When tax assessments and imposts upon the subjects are low, the latter have the energy and desire to do things. Cultural enterprises grow and increase, because the low taxes bring satisfaction. When cultural enterprises grow, the number of individual imposts and assessments mounts. In consequence, the tax revenue, which is the sum total of (the individual assessments), increases.

When the dynasty continues in power and their rulers follow each other in succession, they become sophisticated. The Bedouin attitude and simplicity lose their significance, and the Bedouin qualities of moderation and restraint disappear.  Royal authority with its tyranny, and sedentary culture that stimulates sophistication, make their appearance. The people of the dynasty then acquire qualities of character related to cleverness. Their customs and needs become more varied because of the prosperity and luxury in which they are immersed. As a result, the individual imposts and assessments upon the subjects, agricultural laborers, farmers, and all the other taxpayers, increase. Every individual impost and assessment is greatly increased, in order to obtain a higher tax revenue. Customs duties are placed upon articles of commerce and (levied) at the city gates, as we shall mention later on.  Then, gradual increases in the amount of the assessments succeed each other regularly, in correspondence with the gradual increase in the luxury customs and many needs of the dynasty and the spending required in connection with them.  Eventually, the taxes will weigh heavily upon the subjects and overburden them.  Heavy taxes become an obligation and tradition, because the increases took place gradually, and no one knows specifically who increased them or levied them. They lie upon the subjects like an obligation and tradition.

The assessments increase beyond the limits of equity. The result is that the interest of the subjects in cultural enterprises disappears, since when they compare expenditures and taxes with their income and gain and see the little profit they make, they lose all hope. Therefore, many of them refrain from all cultural activity.  The result is that the total tax revenue goes down, as (the number of) the individual assessments goes down. Often, when the decrease is noticed, the amounts of individual imposts are increased. This is considered a means of compensating for the decrease. Finally, individual imposts and assessments reach their limit. It would be of no avail to increase them further.  The costs of all cultural enterprise are now too high, the taxes are too heavy, and the profits anticipated fail to materialize. Thus, the total revenue continues to decrease, while the amounts of individual imposts and assessments continue to increase, because it is believed that such an increase will compensate (for the drop in revenue)in the end. Finally, civilization is destroyed, because the incentive for cultural activity is gone. It is the dynasty that suffers from the situation, because it (is the dynasty that) profits from cultural activity.

If (the reader) understands this, he will realize that the strongest incentive for cultural activity is to lower as much as possible the amounts of individual imposts levied upon persons capable of undertaking cultural enterprises. In this manner, such persons will be psychologically disposed to undertake them, because they can be confident of making a profit from them.

37. In the later (years) of dynasties, customs duties are levied.

It should be known that at the beginning, dynasties maintain the Bedouin attitude, as we have stated. Therefore, they have few needs, since luxury and the habits that go with it do not (yet) exist. Expenses and expenditures are small. At that time, revenue from taxes pays for much more than the necessary expenditures, and there is a large surplus.

The dynasty, then, soon starts to adopt the luxury and luxury customs of sedentary culture, and follows the course that had been taken by previous dynasties.  The result is that the expenses of the people of the dynasty grow. Especially do the expenses of the ruler mount excessively, on account of his expenditures for his entourage and the great number of allowances he has to grant. The (available) revenue from taxes cannot pay for all that. Therefore, the dynasty must increase its revenues, because the militia needs (ever) larger allowances and the ruler needs (ever) more money to meet his expenditures.  At first, the amounts of individual imposts and assessments are increased, as we have stated. Then, as expenses and needs increase under the influence of the gradual growth of luxury customs and additional allowances for the militia, the dynasty is affected by senility. Its people are too weak to collect the taxes from the provinces and remote areas. Thus, the revenue from taxes decreases, while the habits (requiring money) increase. As they increase, salaries and allowances to the soldiers also increase. Therefore, the ruler must invent new kinds of taxes. He levies them on commerce. He imposes taxes of a certain amount on prices realized in the markets and on the various (imported) goods at the city gates.  (The ruler) is, after all, forced to this because people have become spoiled by generous allowances, and because of the growing numbers of soldiers and militiamen. In the later (years) of the dynasty, (taxation) may become excessive. Business falls off, because all hopes (of profit) are destroyed, permitting the dissolution of civilization and reflecting upon (the status of) the dynasty. This(situation) becomes more and more aggravated, until (the dynasty) disintegrates.

Much of this sort happened in the Eastern cities during the later days of the ‘Abbasid and ‘Ubaydid(-Fatimid) dynasties. Taxes were levied even upon pilgrims making the pilgrimage. Salah-ad-din Ibn Ayyub abolished all such institutions and replaced them with good works. The same also happened in Spain at the time of the reyes de ta’ifas. Yusuf b. Tashfin, the Almoravid amir, put an end to it. The same has also been happening in the cities of the Jarid in Ifrigiyah, ever since their chiefs gained control over them.

God “is kind to His servants.”