Walton Castle is the local name for the remains of a Roman fort, now submerged beneath the waves offshore at Felixstowe in Suffolk, Britain.  Resources for study of this monument are limited, and I have discussed them in other posts.

One interesting article appeared in, of all things, a popular magazine.  Such an item is, of course, not usually held by research libraries so can be very hard to locate.  The item is Julian K. Hagar, “A New Plan for Walton Castle”, Popular Archaeology Today, vol. 8, no. 1 (February 1987), p.22-25.   Fortunately today I was able to find a copy.  In view of the difficulty of locating it, I will make a scan of the article available here:

Hagar’s analysis of the sketchy evidence is deeply convincing.  He points out that by 1623, the earliest date at which we have  knowledge of the site, the eastern side of the ruins must already be long gone.  The cliff did not erode quickly, and indeed has only eroded another 50 metres in the last 200 years.

A sketch from 1623, reproduced in the Victoria County History of Suffolk, shows the west side of the fort more or less complete.  The wall was perhaps 180 metres long, if we assume the measurements given in 1754 were copied from an earlier, now lost, account.  Hagar suggests that this view is taken from the land-ward side, that the sea can be seen through the “gate”, and that we should disregard “cliffs” in the foreground as artistic license.

On this basis, he proposes this map for the castle in 1623: 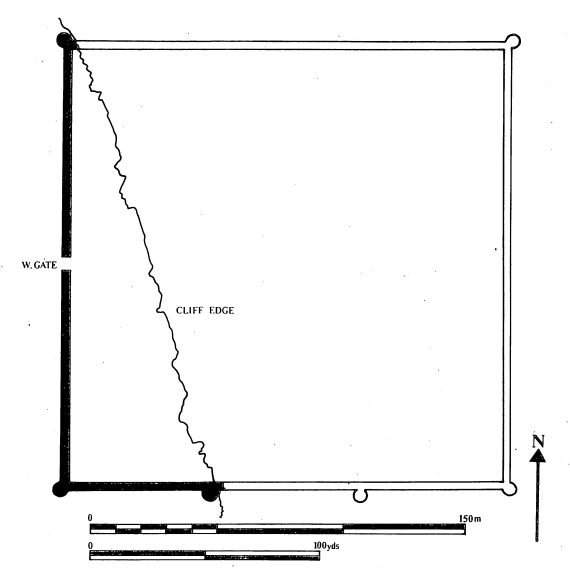 By 1722 much of the remains had fallen into the sea, and the length of the west wall was only about 100 metres. 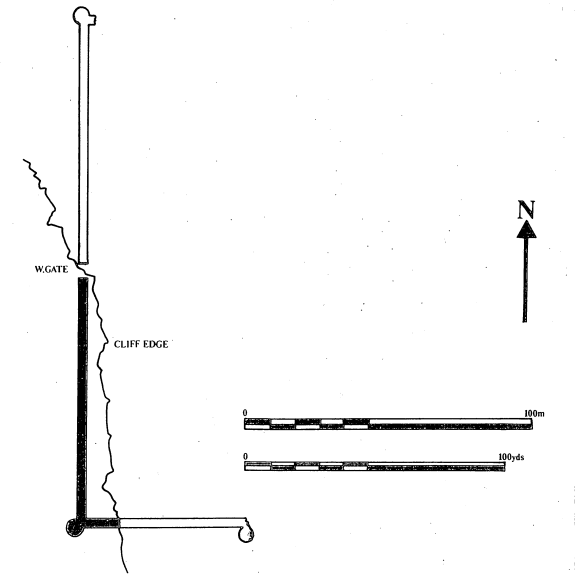 The highest point remaining, in the water, today, is still the ruin of the south-west corner tower and a fragment of each of the adjacent walls.  This tends to favour Hagar’s theory.

Another point in favour of Hagar’s reconstruction is the north alignment that he gives the ruins, which does indeed seem to be the case.  It is unfortunate that I was unable to locate the manuscript of the 1969 survey, which would have clarified this point.

But on the other hand, there are two obvious problems with Hagar’s plans.

The first is that the beach does not today run NW-SE as he shows it.  It probably never did.  It might have run N-S, but today it certainly runs SW-NE.  The northern end of the ruins is therefore closer today to the beach, not the southern end.

The only feature of the landscape that would permit more erosion at the N end is the presence of “the Dip”, the shallow valley carved by the stream that runs into the sea at that end, which is still there today.  But this seems doubtful.

The second point leads us in the same direction.  If we agree with Hagar that the 1623 drawing was made from the landward side – for how else could it be drawn? – then the drawing shows quite a bit of masonry on the north side.  This is equally obvious in what is probably the original of the drawing: 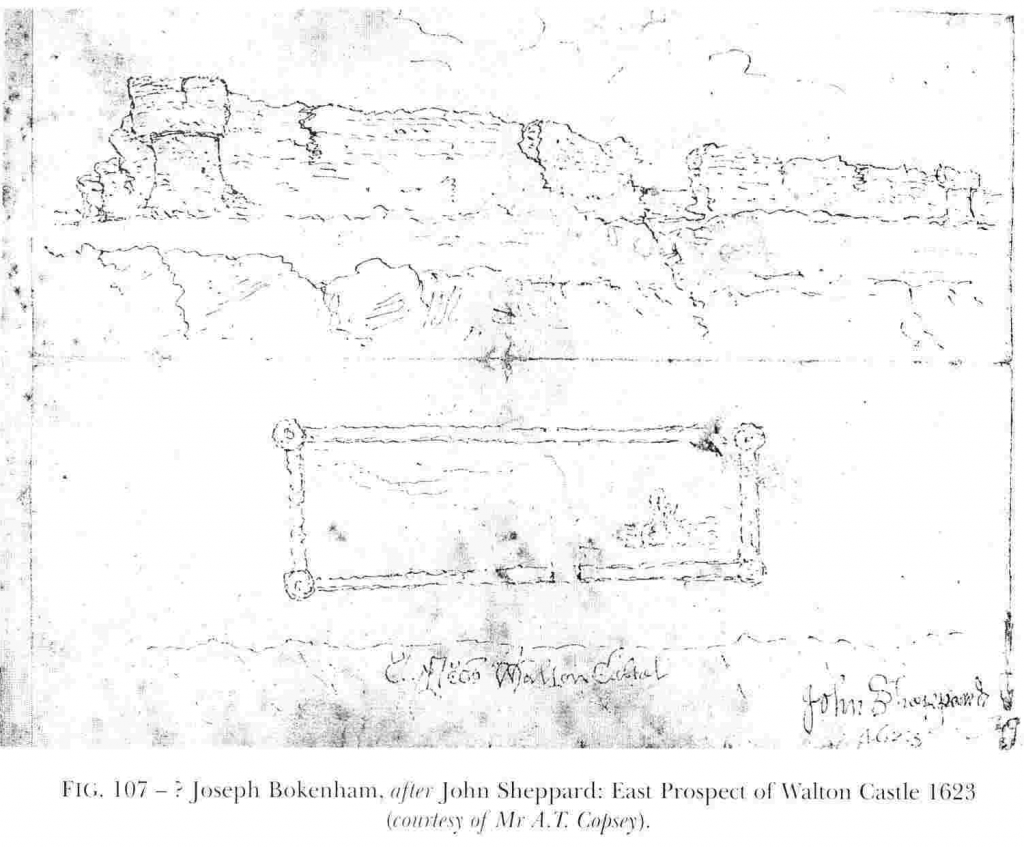 The map at the foot of the drawing is of the same period.  Hagar is probably right to treat the east wall as an artist’s guess; and to suppose that the “corner towers” drawn at that end were in reality bastion towers, mid-way along the wall.  The fort, then, was square, just like other Roman forts of the Saxon Shore.

But in Hagar’s favour, we can see that within the map are some ruins at the SW corner, possibly the remains of a demolished medieval castle keep mentioned in the sources.  These must have been visible in 1623 or they wouldn’t be noted.

I would therefore suggest that perhaps the beach in 1623 did indeed run North-South, and preserved more of the North wall than Hagar allows.  Perhaps the north side eroded faster – who can tell?  But the hypothesis that half of the wall fell first does indeed seem to be correct.

It is very unfortunate that the survey undertaken by Jeff Errington and his divers in 1969 cannot be located.  Jeff told me that his divers did indeed locate the gateway area on the sea-bed.  I have written again to the Ipswich Museum team to see if anything can be done to locate the survey manuscript.  At present the material is unclassified and therefore researchers are not permitted to access it.