The two pages of the medieval Life of St Valentine have taken me rather more time to translate than I had realised.  But we’re getting there!

When I decided to make this translation, I first located the text in the Acta Sanctorum (AASS) volume for February 14.  I was preparing to transcribe this, but I was then was directed to an online transcribed version.

I split the text into sentences, sometimes phrases, and interleaved it with the output from Google Translate for those same phrases.  Google Translate is not that good for Latin, but it often picks up when the text is that of scripture, and generally offers some vocabulary.  This works best for short bits of Latin, which is another reason why I proceeded as I did.

Having created this file in Word, I proceeded to work through it, translating each bit, and looking up words in QuickLatin or other tools.

On getting to the end of the first pass – a few knotty bits aside – I had intended to revise.  But in fact I then obtained a copy of the modern critical text by D’Angelo.  I could hardly ignore this, so I scanned this to create an electronic version.  Then I coloured it red, and interleaved it into my working document, placing D’Angelo first, the AASS next, and my draft translation after that.  This gave me something like this: 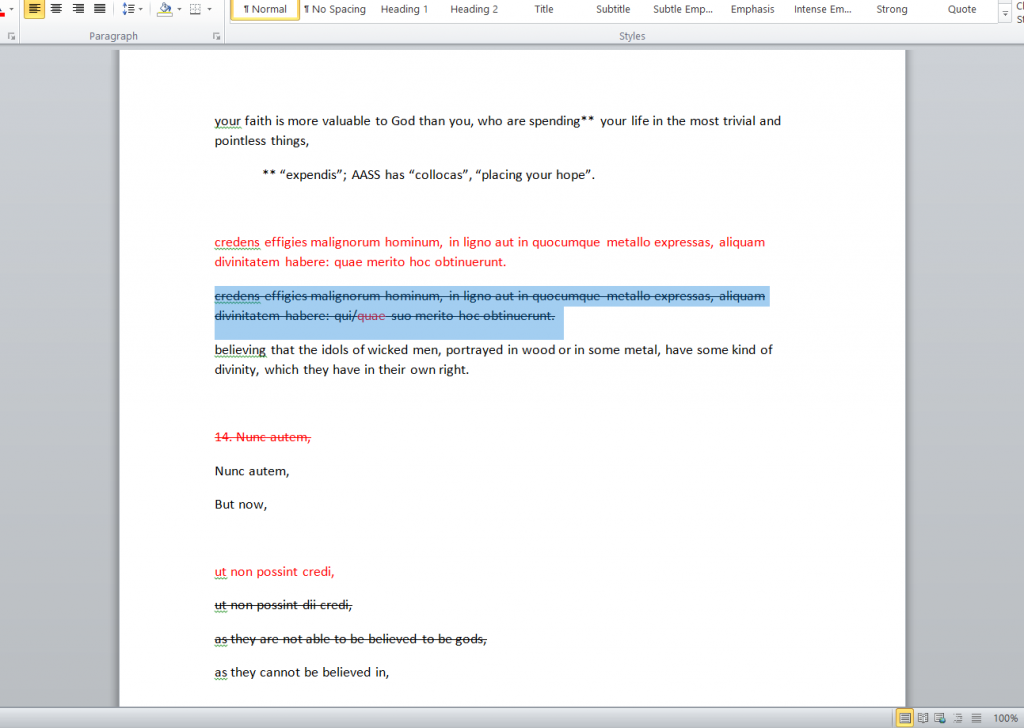 It was, inevitably, tedious to go through the whole thing comparing three lines at each point.  But I have just reached the end of this.

My principle, naturally, was to use the modern text wherever possible.  I found, in fact, very few differences, and almost none that made any significant difference to the meaning.  A couple of examples appear above, but these were rare.  This validated D’Angelo’s remark that the AASS text was basically sound.

I did modify D’Angelo in a couple of ways.

Firstly he used strange medieval spellings, like “nichil” for “nihil” and “michi” for “mihi”.  He admits that the spelling of the author’s copy is not recoverable, so I could see no reason to preserve the corruptions of the copyists.  His policy led him, in fact, to give the name “Ephebus” in two different spellings, which is simply confusing.  These features would merely be a barrier to any seeking to read the Latin.  I normalised the text, therefore.

Secondly he followed the modern practice of replacing “v” with “u”.  This fad came in during the early 20th century, and was justified on the grounds that no such letter ever existed in lower case Latin.  But this is the same issue.  Roman books were written in capitals, without word division or punctuation.  There were no lower case letters.  There is no obvious reason to reproduce this today.  We do not reproduce the incompetent spellings and renderings of the age of Shakespear or even Jane Austen in our modern editions, because to do so is to interpose a barrier between the text and the reader.  The old approach is of interest to specialist scholars, but to nobody else.  My purpose is always to encourage the general reader to look at the text.  Such a reader has no interest in the oddities that we have discussed.  So once again I restored a more normal spelling.

The process of reading through the whole translation again was useful in improving it.  It was burdensome to do, but it did produce real improvements.  We have to allow for the fact that translators get tired, and make mistakes; and a second pass will pick these up.

The translation document at the moment is as shown above.  The next stage is to produce a proper word document, and read through it all again, looking for bugs.  We’re not too far away, I feel.