The column of Arcadius stood at the centre of a circular forum in Constantinople.  It was pattern on Trajan’s column in Rome.  Like Trajan’s column it was hollow, with a spiral staircase inside, and richly decorated.  But it is no longer standing.  It was badly damaged by earthquakes, and eventually taken down by the Ottoman state in the 18th century after it became notably unsafe.  Only the massive base remains, stuck between modern houses.

But today on Twitter a couple of wonderful photographs were posted here by @ByzantineLegacy.  They show inside the base, and the view of the staircase from above!  Here they are: 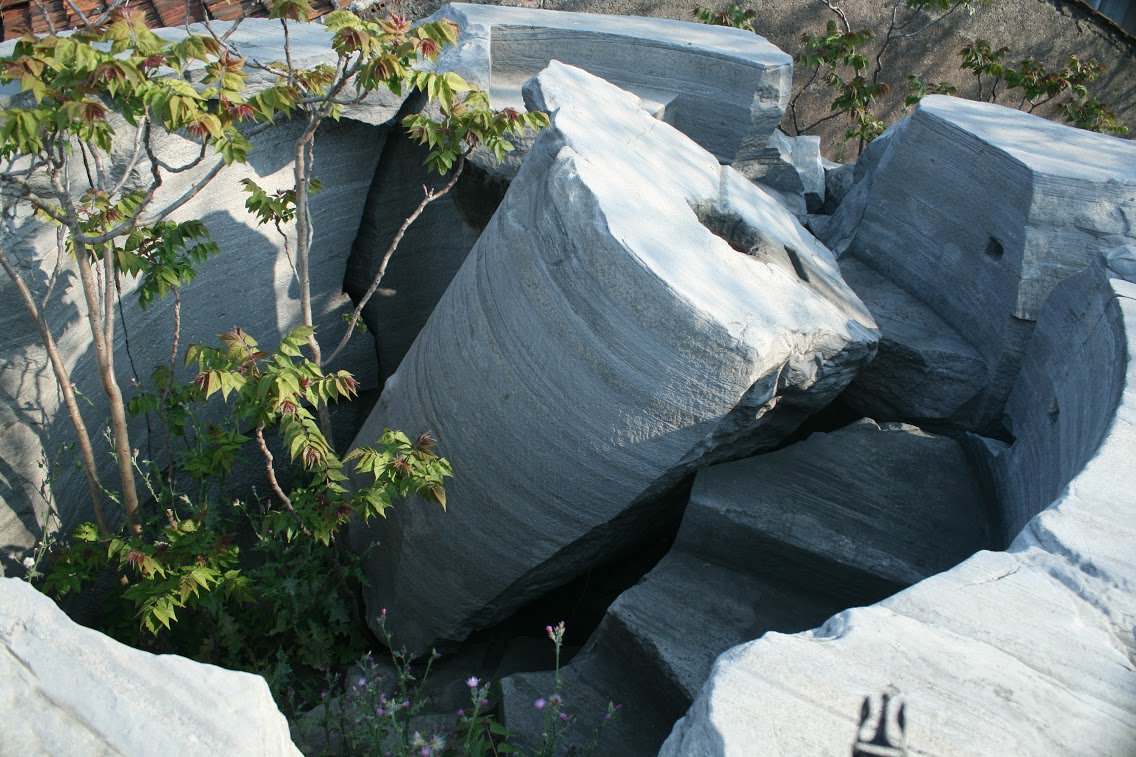 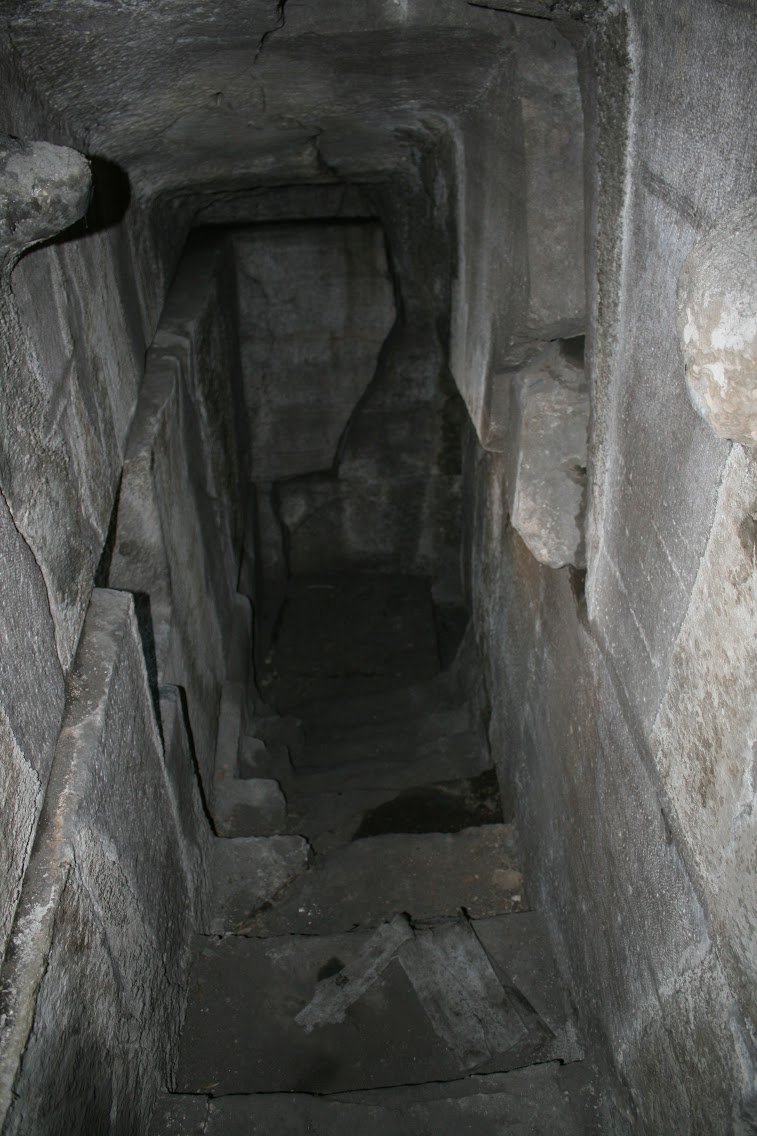 He says that the photos by Muzaffer Özgüleş (2009) @TimelineTravelP of timelinetravel.net, although I was unable to find them at that site.

Here is the column as it is today: 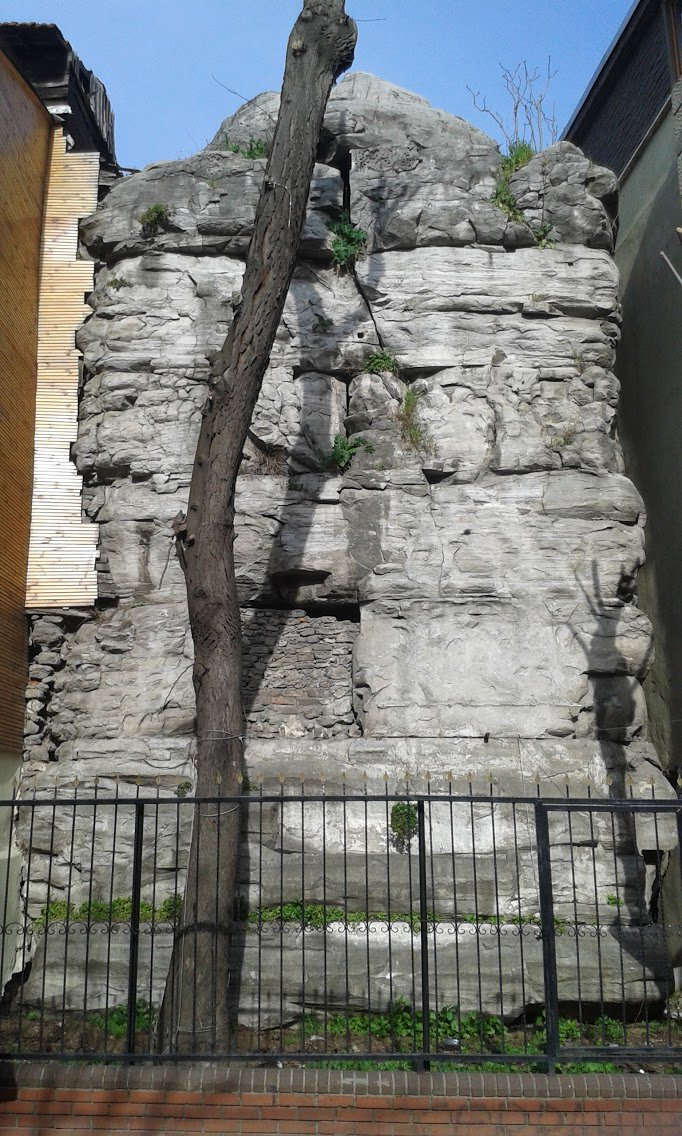 And finally a drawing of the column, as it stood in 1575, taken from the “Freshfield album”, a manuscript held at Trinity College Cambridge, and indeed online: 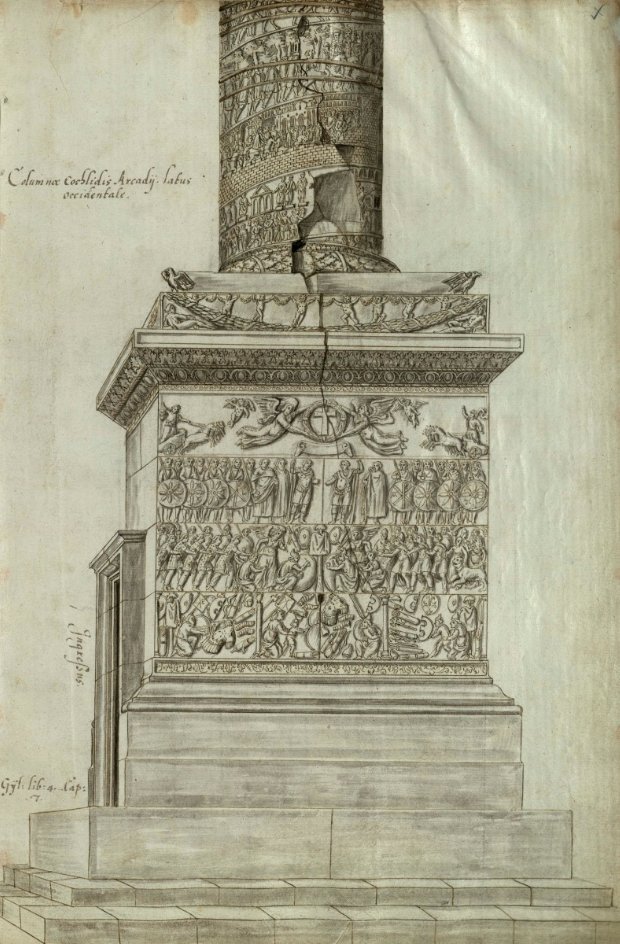 Queried about how one could see the inside, the author wrote:

It is always “open” but involves getting permission and then climbing on the nearby roof. It was possible to enter in the past, but it is really the case now. It would be amazing to enter the staircase one day.

I noticed that the Wikipedia article was uncertain about when the column was taken down:

It was destroyed in either the 16th or the 18th century when, weakened by earthquakes, it threatened to topple and had to be taken down. Only its massive masonry base of red granite now survives, known as the Avret Tash in Turkish, located on Haseki Kadın Sokuk in the Fatih district of Istanbul.

(snipNot, I think red granite!)  So when was it?  A little googling led me to O.M. Dalton, Byzantine Art and Archaeology, Oxford, 1911, p.144, online at Archive.org here, which said:

The column of Arcadius,[4] like the vanished column of Theodosius,[5] was on the triumphal way between the Golden Gate and the imperial palace, its actual site being the forum known as Xerolophos. It stood until the year 1719, when it was so damaged by an earthquake that the Government ordered its removal. What remains is called the Avret Tash, or Woman’s Stone, because there was formerly a woman’s market in the neighbourhood. It is in a side street; and though only the base and lowest part of the shaft still stand, it rises above the one-storied houses which surround it. The square base contains two chambers, on the roof of one of which is a design in relief with the sacred monogram between a and w, in a lozenge inscribed in a rectangle: the spandrels at the corners of the latter figure contain palmettos and scrolls. Of the exterior only the east side is visible, the other sides being concealed by the structures which crowd round it. The remaining reliefs have suffered severely from the effects of fire and neglect. Hardly a complete figure has survived,[6] and it is impossible to use these damaged remains as the basis for a study of contemporary sculpture.

The footnotes are also interesting:

6. Strzygowski’s Fig. 6 on p. 237 shows some ornamental detail, one complete figure of a man, and fragments of other figures.

From this I infer that there are other early drawings of the column available, which would repay investigation another time.

The statue of Arcadius lost its right hand during an earthquake in 542, and in 740 it also fell down, also as a result of an earthquake. The column itself suffered from a severe storm in 549, with parts of the shaft and the capital were cracked.13. So it stood until 1719, in which year it was greatly damaged by an earthquake and was completely removed by order of the government.14. There remained only the parts that still today form the remains of the popularly named “Awret Tasch”. The identity of these latter with the Arcadius column can be proved without difficulty; for there were only two pillars in Constantinople, which were adorned in the manner of Roman figures of the Trajan and Marcus Aurelius with spiraling reliefs around the shaft: the column of Theodosius on the Taurus, which has disappeared completely from the ground; i.e. on the third hill, …

The description of the remains is very thorough, with illustrations, including this plan: 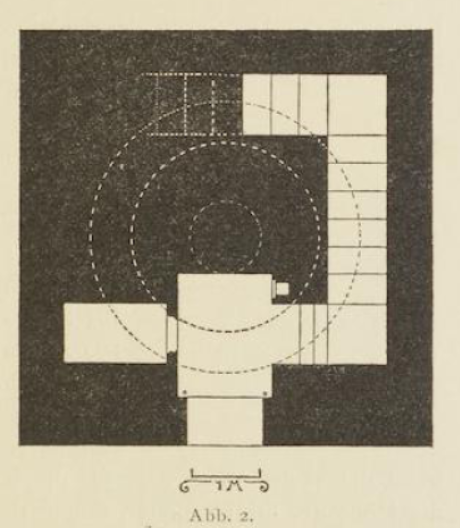 But let’s pursue instead the question of when the column was taken down.  Foot note 14 is given as Hammer, Constantinopolis und der Bosporos, 1822, vol. 1, p.182.  I was unable to find this using Google, but the Europeana site took me to it here.  Page 182 is here.  It states:

So it stood for hundreds of years until in the great earthquake of 1719 most of it collapsed and it was then completely dismantled by order of the government 5), except for the pedestal, the ruins of which today are all that remain of this monument erected fourteen centuries ago.

The footnote is obscure, it must be said!  Searching for it brings up loads of copies of Hammer, all of which steadfastly refused to appear earlier today.

So who or what is this?  Looking at another work by Hammer, is Hadschi Chalfa, “Takwim et-tewarich”.  This Mustafa Hadschi Chalfa has an article here, from which we learn that he was also known as Kâtib Tschelebi, and was a Turkish scholar (1600-1658).  His main work was his “Keschf ez-zunûn”, a bibliography, encyclopedia and lexicon (a Latin translation exists  in 7 volumes, ed. Flügel, Leipzig and London, 1835-58; e.g. this volume).  His “Takwîmu’t-tawârîch”, printed in Constantinople in 1733, in Turkish and Persian, is a set of chronological tables of historical events.  His alternative name leads us to a Wikipedia article, under the name of Kâtip Çelebi, also as Haji Khalifa, which is probably how we would call him today.  This tells us that an Italian translation of his “Taqwīm at-Tawārikh” exists, printed in 1697, made by Gio. Rinaldo Carli and titled Cronologia Historica; and it can be found at Google Books here.

But of course he died before 1729!  The title is probably a generic one; so we are no further forward in locating the volume.

I went back to find some of the searchable copies of Hammer, such as this one.  A bit of experimenting shows that Hammer also spells it “Takwimet” and “Takwimot” (!).  Searching on “Takwimet” leads us to the same author’s Histoire de l’empire ottoman, 1844, page 501, which is a table of oriental authors used for the work.  We find there:

This is the same chronicle; but there is talk of continuators, who printed in 1733 – just as  before.

But I think we’ve now ventured rather beyond my area of competence, into strange languages, none of which are accessible.

All the same, a book printed in 1733 should certainly know what happened in 1719, in the same city.  Hammer plainly had access to it.  I think we can conclude, even if we can’t look at Haji Khalifa’s book, or rather the continuation of it, that the column did indeed collapse in 1719.  I find a magazine article in the Daily Sabah here that says that the earthquake took place on May 25, 1719.

3 thoughts on “Some wonderful pictures from the Column of Arcadius in Istanbul, and notes on when it was destroyed”