I’m busy earning a living at the moment, so there is little to report.  However I happened to see a post on twitter recently about St Cuthman, an anglo-saxon saint, which sparked my interest.  All that is known about him is contained in the Acta Sanctorum volume for February (vol. 2), under February 8th, published in 1656, by coincidence during the only period of history when England was not a monarchy.  There’s a single Life in there (with the reference code BHL 2305), quite short, which I have begun to translate into English in my scanty spare moments.

Googling about St Cuthman revealed a lot of low-grade material.  There seems to be only a single article.  This is present in JSTOR, but for some reason inaccessible to me.  I’m starting to get the feeling that my JSTOR alumni access through my old university is being downgraded.  Increasingly articles are not accessible.  Luckily a friend had a copy.  This referred to endless “summaries” of the contents of the Acta Sanctorum text, but no translation.  I could wish that these busy gentlemen had translated rather than skimming and summarising.  For instance the article author seemed to think that the Acta Sanctorum contained two Lives, rather than one.  The one text was derived from two manuscripts; that was the source of his misreading.

The text in the Acta Sanctorum was signed “I.B.”.  This can only be Jean Bolland himself, the originator of the whole 350-year-long (so far!) Acta Sanctorum project.  He had access to these two manuscripts.  Looking at the modern Bollandist site, I find that they have knowledge of only two manuscripts today.  Probably these are the same two manuscripts.  One is still in the region of Rouen, as it was in Bolland’s day.  The other has migrated to Germany, to Gotha.  Neither is online unfortunately.

Now I find that translating anything is easier if I have an electronic text to hand.  It allows me to use electronic tools and lexica.  The complete Acta Sanctorum is online in electronic form at the Ökumenisches Heiligenlexikon site.  Nothing on the home page suggests this, but a Google search reveals it here.  Even so it is not indexed properly – you have to click on each month, and volume, and page through it.  But it is a blessing to have!  I wish I knew more about how this text was created.  There are a tiny number of typos in it, as well as the abbreviations and ligatures present in the original printing.  But it is invaluable.  Indeed I have purchased their keystick with a copy of the site on it, in case it should ever vanish.

Websites do vanish, as does material on it.  This week somebody asked me about a passage in Photius’ Bibliotheca.  I recalled that  the translation by Rene Henry was online at remacle.org, so off I trotted.  But I found that it was no longer there!  Instead the material was subdivided much, but only part of it was still there.  This is quite a loss, and I wish that I had archived it.  I found, annoyingly, that Archive.org had NOT archived the site.

Another article that I read this week observed that Google is no longer a good search engine.  This chimes with my own experience.  I have long noted that, of the vast quantities of material that I have shovelled onto the web over the last 20 years, very little is returned any more.  This week I had occasion to look for a passage from the “Arabic canons of Nicaea”.  I googled the text, and found it in the end, after a bit of searching, in … the Nicene and Post-Nicene Fathers!  Which I have  on my site, but did not appear in the results.  Which is on the CCEL.org site, that digitised it, and which did not appear in the results.  In fact not a single copy of the various digital copies appeared.  It looks very much as if the Google search engine prioritises heavily on creation date, and marginalises or ignores material from longer ago.  This is terrible for us all.  Google returns a picture of the web as it is now, like a news service.  It is much less good at finding material that is there but older.

This also leaves aside the increasing evidence that Google is operating a political censorship.  Today I saw an article claiming that their algorithm is basically much like the evil new Chinese system of “social credit”, and simply omits results from different political viewpoints.  I find it quite easy to believe this.  I myself was subjected to a 12-hour twitter ban this week.  Twitter shoves an endless stream of absurd political posturing into your face, which it is very hard to avoid.  Much of it is extreme, even by the standards of modern California, the fons et origo of so much that is wrong and nearly all that is absurd.  The platform is engineered to cause people to respond.  Your behaviour is manipulated to make you do so.   Thus I was unwise enough to respond to one of these, politely but dismissively, and to my astonishment was instantly banned by twitter for expressing a view that they did not like.  Likewise this week I have observed that a couple of “military humour” pages on Facebook are being routinely subjected to harassment by the Facebook “moderators”.  One had to abandon its efforts and restart a new page.  Another discovered that it was “shadow-banned” – that Facebook had decided not to relay posts to those who had asked to see them.  Neither page has ever posted anything really objectionable, or even a fraction as salty as a military barracks would ordinarily be.  Yet they face constant interference.

I do think that we need a better search engine.  We need that older material.  Searching the web has always been an art.  One person will find something; another nothing, just through luck of choosing the right terms.  That will probably always be so.  But the material should be there.

At the moment at night I am reading my way through the Diary of a Country Parson, in five volumes.  This is the diary of James Woodforde, who was rector of Weston Longville, nine miles west of Norwich, for thirty years, until he died in 1802 at the age of 62.  By then he was in health and attitude an extremely old man.  He often refers to going to Norwich and staying in the market place in an inn called the Kings Head.  The editor was unable to locate this, and I myself know the area well and don’t know it.  But it turns out that the east side of the market place in 1800 was very different from today, when it is entirely shops.  It contained four large commercial coaching inns, each with a gateway into a long yard behind.  Indeed the street behind this area, and parallel to the market, is still called “The Back of the Inns” today on Google maps.  The Kings Head was demolished in 1813 to create Davey’s Place, which is a narrow street running from the market towards the castle.  I was able to find an 1806 drawing of the area on Wikipedia, by James Cotman, looking south, here. 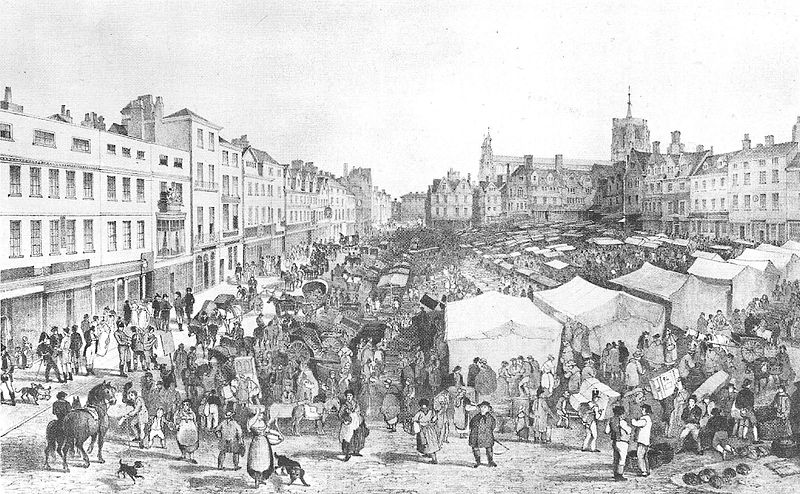 Sadly the resolution is too low to zoom in on the front of the properties on the left, but I can see two inn signs in it.  One must be the Angel Inn, which stood where the eerie and beautiful Royal Arcade now stands.

In many ways the frontage of the east side – the street there was known as Gentleman’s Walk – is rather more impressive than it is today.  The inns were big, bustling enterprises, and a coach went to London almost every day.  They travelled overnight, interestingly.  There were 4 or 6 places inside the coach, and 2 places “outside” in the basket, at half-price.  Parson Woodforde and his niece travelled inside at a £1 each, while their servant Briton travelled in the basket for 10 shillings.  It looks as if Parson Woodforde almost always stayed at the Kings Head precisely because it was busy and bustling and a complete change to his quiet isolated rectory at Weston.  He liked the excitement, it seems.

Pictures of the past are invaluable.  Too many are still held behind walls of copyright and greed, but perhaps this will change as time goes by.  Let us hope so!

14 thoughts on “From my diary”