The word “Christianitas” became important during the Dark Ages.   Charlemagne inherited the kingdom of the Franks, and he sought to do something about the pointless barbarian kingdoms atop the decaying ruins of the Western Roman Empire.  Out of these he forged a vision of a new world, and one that his contemporaries could understand and relate to.  He connected the German idea of the High King with the idea of a Roman empire.  He made use of the only surviving Roman institution, the church.   All these forces for stability he connected together.  His kingdom did not survive him; but his vision did.  Instead of the steady decline and splintering that had preceded him, he left a world with an idea: the idea of Christendom.

The word “Christianitas” comes to mean “Christendom” at this time, in the Carolingian period.  It still retained its meaning of “Christianity”.  But as such it is important as a vehicle for stability within the medieval period and indeed beyond, into our own day.[1]

But this usage is not that found in antiquity.  It belongs to a future unimaginable to a civilised Roman, even as late as St Augustine.  The Roman collapse was unimaginable – until it happened.  So the word is used to mean “Christianity” in late antiquity.

There is in fact a monograph on the subject: Tim Geelhaar, Christianitas: Eine Wortgeschichte von der Spätantike bis zum Mittelalter, Vandenhoeck & Ruprecht, 2015.  This is in German, which probably means that nobody in the English- or French-speaking world has read it!  In fact the author might be wise to publish a related journal article in each language in order to raise the profile of the study.  It’s also inaccessible to me, being offline.  The English language summary of the book is interesting:

The word “christianitas” arose as an abbreviation for the medieval idea of united Christendom, which entered the historical narratives concerning Christianity, the Papacy and emperorship, the crusades and Europe. In fact, in late Antiquity and the Carolingian period “christianitas” stood for many different concepts. In this volume Tim Geelhaar disconnects the term and the idea behind it and determines the situations in which it came to be used, how it was reprogrammed and politicized. He demonstrates the historical semantics behind “christianitas” as well as the plurality of Christianized, Latinized Europe.

Fortunately the Google Books preview is generous, and so it is possible to read some of the key pages.   Page 53 for instance shows tables of authors who use the word in late antiquity.  Page 414 gives more detail on each. 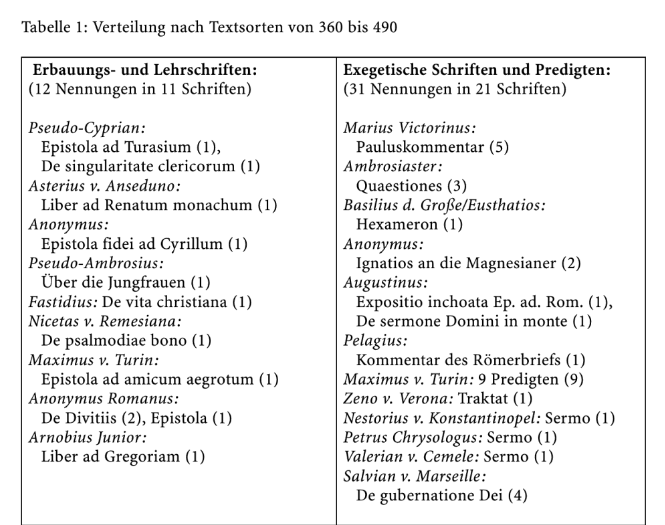 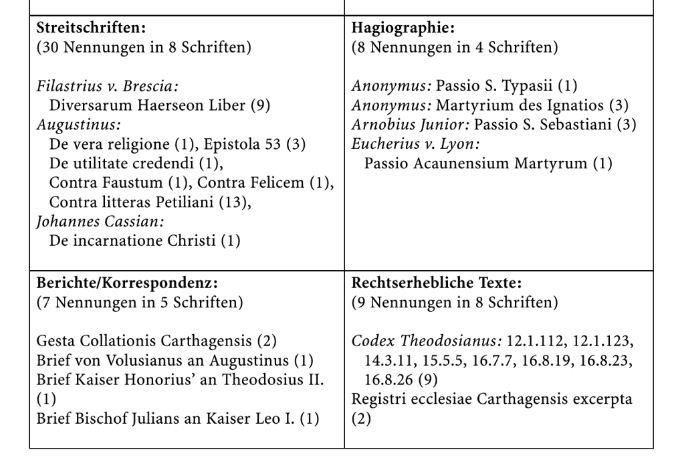 The authors are divided into 4 sections, as Dr G. is interested in exploring the different ways in which the word is used in late antiquity.  But note the table header: this is authors from 360-490 AD.

The Clavis Patrum Latinorum (CPL 62 and 64) lists them both as spurious, and suggests that nothing can really be known for certain about the date or author of either.  De singularitate clericorum has been attributed to an obscure Donatist writer named Macrobius, but the CPL point out that there is nothing Donatist about it, and Rufinus tells us that the Novatianists found it necessary to put forward their works under the name of Cyprian, towards the end of the 4th century.

Unfortunately the text of the commentaries by Marius Victorinus was not printed until 1828, by Angelo Mai in his Scriptorum Veterum Nova Collectio, vol 3, part 2, and the manuscripts that he used were very lacunose.  Migne of course just reprinted Mai.  The first critical text is that of Locher in the Teubner series in 1972, which is unreliable.  The reliable text is that of the CSEL, and this is not online.  I believe a German translation exists of all three commentaries; and likewise an Italian one.  But I was unable to find any English or French translation other than Cooper’s 2005 translation of the commentary on Galatians.[2]

We shall therefore have to content ourselves with only one passage, using the text given by Dr. G (p.415-6) from the commentary on Galatian 3:10, and Dr Cooper’s translation of it (p.292):[3]