Back in the 1970s, following the international conferences on Mithraic studies, a rising young scholar named Richard L. Gordon created a journal specifically for Mithras studies.  He named it the Journal of Mithraic Studies, and got contributors, and supporters, and a publisher.  There was definitely a demand for such a journal, as somewhere to report the ever-increasing flow of archaeological discoveries.  The print was just typescript, but the scholarship was excellent, and the times were right for it.

But the journal failed.  Although the volume of Mithras material is great, I have read that the field proved too small to sustain a journal.

Twenty years later, the world-wide web came along, and Dr Gordon tried again.  He created a website, the Electronic Journal of Mithraic Studies, and uploaded to it material from the old journal, plus new reports.  I don’t know the original website address, but it ended up at http://www.uhu.es/ejms/.  But this too failed.  Dr Gordon was ahead of his time, and the infrastructure and acceptance for such a venture did not exist.  So the site gradually died, and by 2016 it was gone.  The university deleted the site, and today it exists only in the Wayback When Machine archive at Archive.org.

This was a bona-fide academic site.  But it seems that there was no strategy to preserve it, and it was treated as ephemeral.

This evening I had occasion to consult a paper, on the Banjevic relief of Mithras, from volume 2 of the JMS.  Looking in the “Out-of-print” section of the archived website, I found the archaeological reports, and downloaded the right section.  The sections were all stored as zip files, containing jpgs.  Back  in 2000, the PDF format did not exist, or if it did, it was not widely used.

Next I got my 7Zip, and unpacked the zip file.  And … disaster! … the tool told me that some of the JPGs were corrupt! 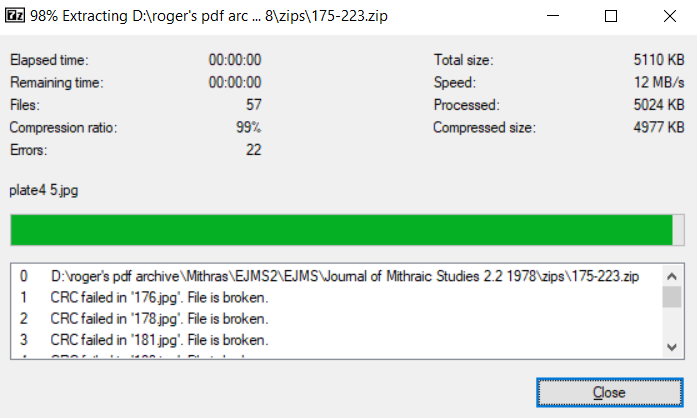 Looking at the folder confirmed the problem:

The pages were partially readable; and when opened, they looked just like that – half blacked-out.  I needed pages 189-191, but 190 was one of the corrupt ones.

Archive.org takes snapshots at regular intervals.  So I hunted back, into the past, to try to find a non-corrupt version of the zip.  But it was in vain.  As soon as the files arrived on the website, they were already corrupt.  Clearly the site owners themselves had some form of problem, at that remote date, and had never checked that their files were OK.  I confess that I have never checked any file that I have uploaded, so I understand.

Resigned, I decided to OCR the pages anyway, and post online what I could read.  So I opened those files in Abbyy Finereader 14.  And then… I saw something unexpected: 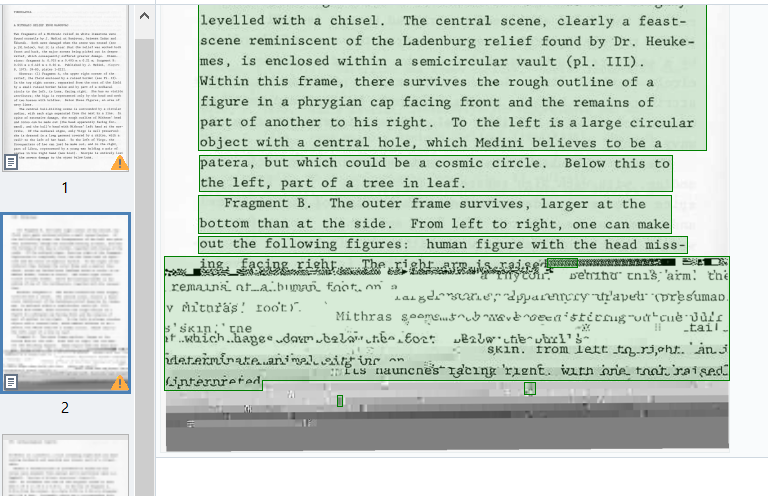 The area that Windows 10 had considered corrupt, and displayed as plain white, was partially readable!  I quickly found that in fact nearly all the text could be worked out.  I have no idea what happened to produce this.  But … it was there.  In the end I only lost a couple of words of the article.

The lesson here is to use more than one tool in such a situation.

This process was really research itself.  No doubt the Journal articles might be found in some research library; but what if they had not?  What if this was an online-only journal?  Is this the future, for some of us?