There is a big news story yesterday about the bones of St Eanswythe, an anglo-saxon saint ca. 630 AD, which have been discovered in the wall of a Kentish church.  They were stashed there at the Reformation, and rediscovered a century ago, but without any certainty as to who they were.  The modern story is that they have been carbon dated and shown most likely to be authentic.  This all arises from the Finding Eanswythe project.

Here’s the headlines from the Daily Mail: here:

England’s missing saint is found: Scientists reveal skeletal remains squirrelled into the wall of Kent church belong to St Eanswythe who died 1400 years ago.  Hidden bones dating back as far as the 7th century are those of the Kentish Royal Saint of St Eanswythe. She was the daughter and granddaughter of Anglo-Saxon kings and one of the earliest English saints. Relics survived upheavals of the Reformation, squirrelled away in a wall, and were discovered in 1885. Patron saint of Folkestone is believed to have founded one of England’s earliest monastic communities.

Bones dating back to around the seventh century are those of St Eanswythe, the daughter and granddaughter of Anglo-Saxons who is venerated in Roman Catholicism, Anglicanism, and Eastern Orthodoxy.

The relics survived the major upheavals of the Reformation, during which Henry VIII’s agents seized and plundered the Folkestone church, before smashing the shrine of St Eanswythe.

Her remains, however, remained squirrelled away in the north wall of the church, and were discovered in a 12th-century reliquary in 1885, after church workmen stumbled upon a niche which had been plastered up.

The patron saint of Folkestone, Eanswythe is believed to have founded one of the earliest monastic communities in England, most likely around 630 on the Bayle, the overlooked historic centre of the town. She is thought to have died in her late teens or early 20s, though currently the cause of her death is unknown.

Now, over 1,300 years after her death, Kent archaeologists and historians, working with Queen’s University in Belfast, have confirmed the human remains kept at the Church of St Mary and St Eanswythe are those of the saint.

St Eanswythe was the only daughter of King Eadbald and his wife Emma, a Frankish princess. Born in around 614, it is believed that she was baptised and raised as a Christian. The princess committed her life to the service of God as a nun, and refused to marry.

Her father built her England’s first female monastery in Folkestone, into which she moved around 630 with companions who had received guidance from Roman monks who had moved to England in around 597 with St Augustine. Though she was not made an abbess, given she was aged 16, historians do not know of any abbesses prior to St Eanswythe.

Stories of her miracles including healing the sight of a blind man and casting out a devil in a sick man circulated during her life, and proliferated after her death in around 640. Historians believe that St Eanswythe prayed day and night, read spiritual books, copied and bound manuscripts, cooked and cleaned, and cared for the sick and elderly in her community.

The monastery survived for around two centuries after her death, before it was sacked by the Danes in 867, according to some historians. St Eanswythe’s holy relics were moved to a nearby church, before a new monastery and church dedicated to St Mary and St Eanswythe were built further inland in around 1138.

The story is copiously illustrated.  Her saints’ day is August 13th.

There seem to be two literary sources. 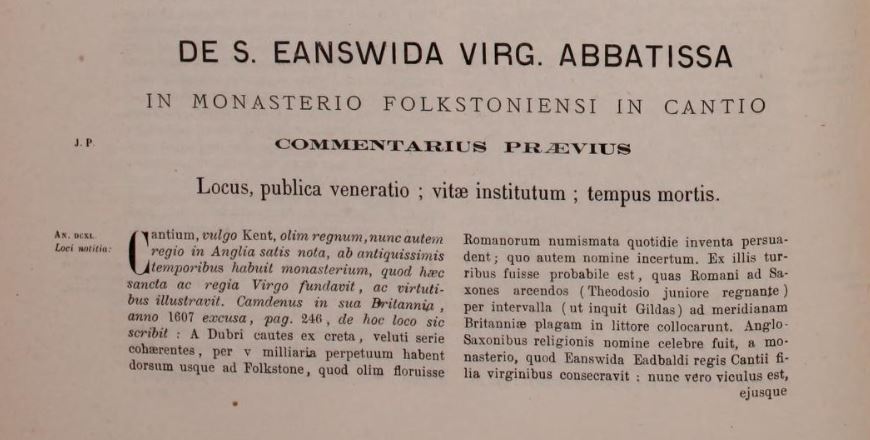 This is the only item listed in the BHL.  Incipit: Ethelbertus rex Angliae per s. Augustinum ep. – Des. et carnem prorsus a dolore purgavit.

There is a manuscript in British Library Cotton Tiberius E I/2, (late 14th century) fol. 60r-v. 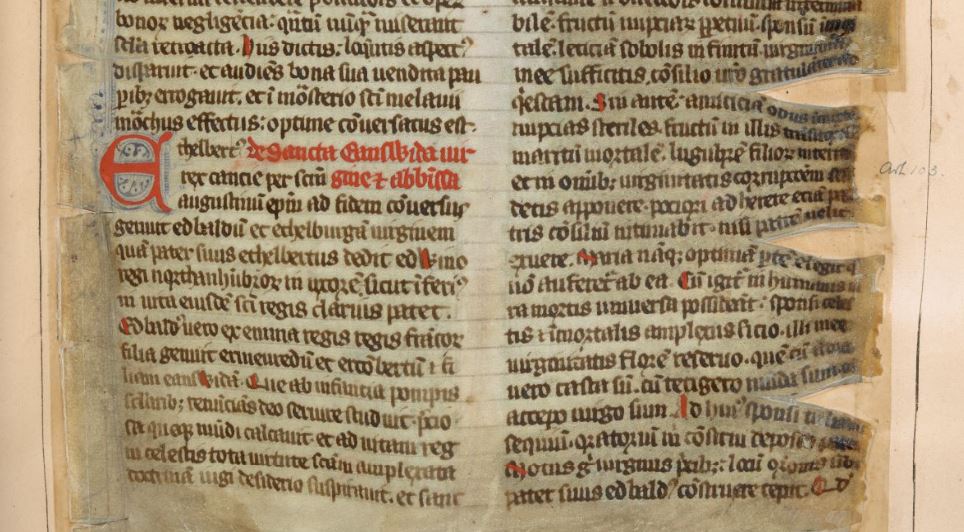 A great number of catalogues of manuscripts are listed on the Bollandist website.  The material there is slender on editions.

Secondly an abridged version in Middle English in John of Tynemouth’s 1360 Sanctilogium Angliae, Walliae, Scotiae et Hiberniae.[2]  The electronic text may be found here, and, with modernised spelling, is as follows:

Saint Eauswyda was daughter to the king, son to king Ethelbert, Edbaldus. And from her youth she forsook the pomps of the world, and induced her Father to make her an oratory at Folkstone that she might in virginity serve our Lord.

And as the oratory was in building, the king of Northamhumbrorum, who was a pagan, desired to have her in marriage and her Father counselled her thereto, and praised the King much. And she said if he could in the name of his gods make a beam of her oratory, which was too short, long enough,  she would assent to him, if not she desired to be left alone.  And the king trusting in his gods gladly assented. And when he had long prayed, all was in vain that he did, and so he went away with shame.  And then the virgin prayed in the name of our Lord. And anon her prayer was heard, and the beam made long enough. And so the King departed.

And by her prayer water came against the hill from a town called Swecton to her oratory. And it came by another river and yet joined not with it.

Four brethren of great riches denied to give dysmes to St Eauswyda.  And after many years, three of them were compunct, and advertised the fourth to go with them to her sepulcre to do penance, and make satisfaction, and he denied it.  And anon the Devil entered into him.   And so his brethren bound him and brought him to her altar. And anon he was made whole and paid his tithes. And she went from this present life the day before the kalends of September.  And because her church was destroyed with the sea, her body was brought to Folkstone.

All useful.  It would be nice if someone would translate the Vita in the AASS.