A correspondent was looking for the Life of St Alnoth in the Acta Sanctorum, and found himself confused by the series, as most of us are initially.

The Acta Sanctorum is confusing to the casual visitor, because all the lives of the saints are given on their saints’ day, the day in the Catholic Church on which they are commemorated.  For Alnoth this is February 27.  There is no overall numbering of volumes.  Instead the numbering is within each month – January vol 1, etc.

The material for St Alnoth is in February, vol 3, under the material for February 27th.  In the 1658 original edition, it’s on p.684.  I’m not sure if there is a standard way to reference this, but I might give it as something like:

This volume is online in a hard-to-read form here.  An electronic transcription is here.  (If you are on Windows, just do a ctrl-F in your browser for Alnoth) 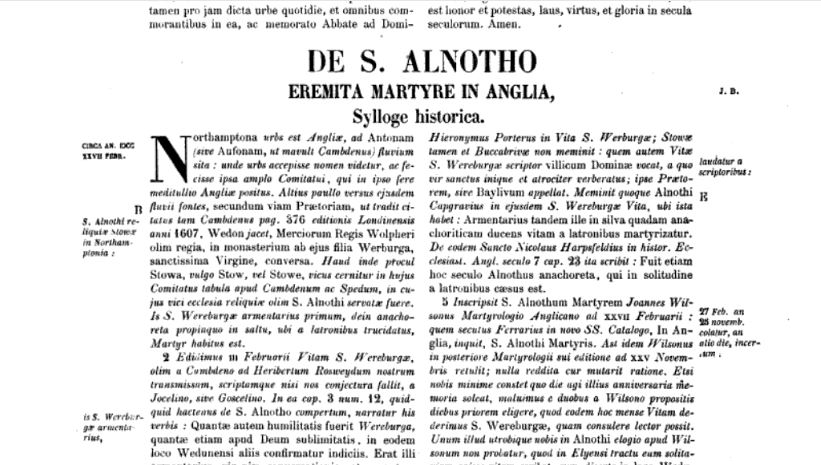 There does not seem to actually be a “vita” for St Alnoth.  This item is instead a “sylloge”, which seems to be a collection of snippets from other hagiographical sources.  It was written in 1658 by the Bollandist editor: in this case, none other than Johannes Bolland (“I.B.”) himself.

Bolland quotes for St Alnoth the “Life” of St Werburgh, which is in February vol 1.  He also gives another couple of snippets from elsewhere.  I did look to see if the vita of St Werburgh had been translated, but if it has, it eluded me.

Alnoth himself was a 7th century anglo-saxon saint, who lived first as a herdsman.  He suffered from the attentions of an  unfair bailiff, and then he moved to become a hermit.  He was eventually murdered by robbers.

One day I ought to sit down and compile a “finder’s guide” for anybody wanting to work with the lives of the saints.  Maybe it already exists, I do not know.  Like most people, I wandered into the world of hagiography more or less by accident!

2 thoughts on “Some notes on St Alnoth”